Rabbi Chaim Zanvil Abramowitz (1902, Botoşani, Romaina - October 18, 1995 Monsey, New York), known as the Ribnitzer Rebbe, was considered a great tzadik and miracle worker. Rabbi Chaim Zanvil was a follower of Kabbalist Rabbi Avrohom Matisyohu of Shtefanesht. He lived in the USSR under Stalin's rule and served as mohel and shochet. 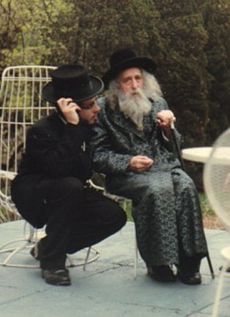 He fasted very often, and immersed himself many times daily in water that was sometimes only accessible by chopping away very thick ice. His Tikkun Chatzos (midnight prayer service) in sackcloth and ashes regularly lasted 6–7 hours, sometimes stretching as long as 12. He cried so much during Tikkun Chatzos that when he was done, the tears and ashes mingled so that he was sitting in mud.[citation needed]

The Russian gentiles feared and revered him. Some says that the KGB brought their wives and children for blessings and experienced miracles. He left Russia in 1970 and moved to Jerusalem, where he lived for a few years before moving to the United States. He lived in Miami, Los Angeles, Boro Park, Seagate, Brooklyn, and finally settled in Monsey, New York.