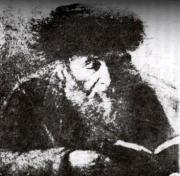 Rabbi Chaim of Tsanz was acclaimed by the leading rabbis as one of the foremost Talmudists, Halachic and Kabbalistic authorities of his time, he received queries from communities all over the world. His response, as well as his Torah commentaries, published under the title Divrei Chaim, reflect his phenomenal Torah greatness, his humility, and his compassionate nature.

Many stories of miracles and wonders surround this great tzaddik. It is said that when he prayed, even the most uninitiated could see the light radiating from him. He was a champion of the poor and established many organizations to relieve them of their poverty.

He visited the great Chassidic leader Rabbi Yisrael of Rizhin and became an ardent follower of Rabbi Naftali Tzvi of Ropshitz.

During his 46 year tenure as Rabbi of Sanz, that city was transformed into a vibrant center of Chassidut attracting tens of thousands of Chassidim. Among his disciples are counted such outstanding leaders as Rabbi Tzvi Hirsh of Liska, Rabbi Shlomo HaCohen of Radomsk, Rabbi Meir of Dzhikov, and the Yetev Lev of Sighet. Rabbi Chaim's five sons all became famous tzaddikim, the most prominent of whom was Rabbi Yechezkel of Shiniava. His seven daughters all married Chassidic leaders. 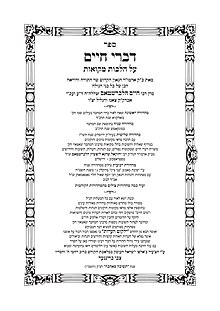 His demand for a high level of scholarship by the Chassidim is a hallmark of Tzanz even today. The current leader of the Bobover Chassidim, who now resides in Brooklyn (NY), is a descendant of Rabbi Chaim. In addition, another scion of Tzanz - Rabbi Yekutiel Yehudah Halberstam, the Klausenburger Rav - has erected several towns, yeshivot, and a modern medical center in Israel, as well as yeshivot in Union City, New Jersey, and Brooklyn, New York. The spirit of Tsanz lives on and is flourishing today in the thriving communities of these two Chassidic leaders.

Rabbi Chaim was wont to say, "When I was young, an ardent love of God burning inside me, I thought I could reform the world, but soon I realized that I'd better just concentrate on improving the Jews of my city. When I failed in that I turned to correct the conduct of my family. I gave up on that too, and I'm trying to improve myself, but even in that, I have failed.

Food for Body and Soul
When eating you consume a physical substance, yet your spirit, that is, your intellect, also derives pleasure from it. Proof of this is the fact that when you are hungry or thirsty you cannot think straight, but when you take some nourishment, your mind is revived. How are we to understand that food, a physical substance, has an effect on the intellect which is spiritual?
Food, as does all physical matter, contains sparks of holiness. When you eat, it is these sparks of holiness that rise from the physical realm to arouse the soul. In other words, when eating you release the spiritual energy that is contained in the sparks of holiness residing in the food, as the Ari HaKadosh explains it.   (Divrei Chaim)

May the merit of the tzaddik Rabbi Chaim of Sanz protect us all, Amen.