One of the earliest high priests (Kohen Gadol) of the 2nd Temple, Shimon Hatzaddik was also one of the most famous. 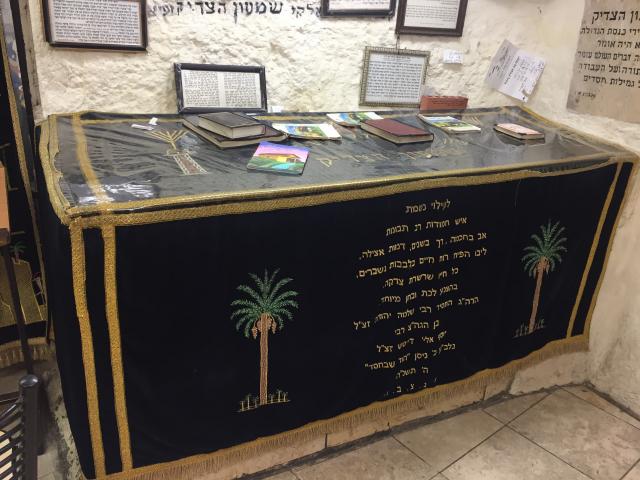 One of the earliest high priests (Kohen Gadol) of the Second Temple, Shimon Hatzaddik was also one of the most famous. He was "among the survivors of the 'Ansei Knesset HaGedolah'" (The Men of the Great Assembly," a group of 120 sages who led the Jewish people at the beginning of the 2nd Temple era)

The Talmud breaks down this period of the 2nd Temple down into three successive stages, with the first stage being the most meritorious, the second marking a gradual spiritual decline, and the third the most deleterious which ended in the destruction of the 2nd Temple in the year 70 C.E.. Shimon HaTzaddik officiated as the high priest during the first era.

Miraculous events repeatedly occurred during the 40 when Shimon HaTzaddik officiated as high priest. These events are as follows:

1) The lot (goral) inscribed "LaHashem," would always appear in the right hand of the high priest during the Yom Kippur service.

2) The strip of scarlet-dyed wool (lashon shel ze'hurit) which was tied to the head of the scapegoat always turned white during the Yom Kippur service. (indicating atonement)

3) The western-most lamp (ner ma'aravi) of the Temple menorah would always be burning. The priest would use its fire to kindle the next day's lamps.

4) The pyre on the altar (aish ha-ma'aracha) did not require any additional wood to sustain a strong fire.

5) There was a blessing upon the first fruits of the Omer, the two loaves offered on Shavuot, and on the loaves of the showbread so that each priest was satisfied with a portion no larger than the size of an olive.

The faithfulness and goodwill that Shimon HaTzaddik embodied during his public tenure as high priest profoundly inspired the nation.  His taught: Upon three things the world is based: upon Torah, upon avodah (service; prayer), and upon acts of kindness. (Pirkei Avot 1:2) He is described as a person who took great thought and consideration regarding his fellow man. His extraordinary character affected the people deeply, and this manifested itself with a host of miraculous phenomena in the Temple, the House of Shimon's dedication.

Following his death, however, the Jewish people were unable to sustain the spiritual heights which they had achieved during Shimon HaTzaddik's lifetime.  As a result, they digressed into a downward spiritual spiral from which they never recovered.  This decline continued and worsened as the second Temple era continued to unfold.  After the death of Shimon HaTzaddik the occurrence of these miracles became sporadic; there were some years when these miraculous signs occurred, and there were other years when they did not.  This spiritual decay plunged to its lowest point during the last 40 years of the second Temple period.  None of the above miracles occurred during these last four decades of the second Temple.

Although there were a number of sins that were rampant among the nation of Israel throughout this spiritual decline, there was no iniquity that was as self-destructive as the interpersonal baseless hatred that was pervasive among the Jewish people during this difficult time.  This dreadful self-inflicted wound had infected the Jewish people and ultimately brought about the destruction of the second Temple. The Talmud bears record to this spiritual decay, and declares that this national tragedy reached its height exactly 40 years prior to the destruction of the second Temple.  It was during this turbulent time that murders became so widespread that the Sanhedrin ceased to judge capital crimes such as homicide.


Shimon HaTzaddik and Alexander the Great

The 25th of the Hebrew month of Tevet is called the day of Mount Gerizzim, on which no eulogy is allowed [due to the holiday] On that day, the Kutim petitioned Alexander of Macedon (Alexander The Great) to have our Temple destroyed, and he permitted them to do it. Shimon Hatzaddik who was the Kohen Gadol [High-Priest] at the time dressed himself in the priestly garments and was escorted by the dignitaries of Jerusalem with torches in their hands. When Alexander of Macedon saw them approaching in the distance, he asked the Kutim, "Who are these men?" The Kutim answered, "They are the Jews who have rebelled against you." As soon as Alexander met Shimon HaTzaddik face to face, he descended from his chariot and bowed down to him. The servants protested, "Such a great king as yourself bows to that Jew?" Alexander replied, "This face," explained Alexander, "appeared to me before every battle which I won..."

Alexander asked the Jews, "Why have you come to see me?" They replied, "Is it possible that the very Temple where we pray for you and for your empire should be destroyed, through the misleading petitions of these idolaters?" "Who are these idolaters?" inquired the king. The Jews replied, "These Kutim who stand before you." "I deliver them into your hands, treat them as you wish," was Alexander's reply. The Kutim were dragged to Mount Gerizzim, and their Temple was destroyed in the same manner they had intended to destroy our Temple. This day was then declared a holiday. As an appreciation to the Greek leader, every boy born that year was called Alexander. (Talmud Bavli, Yoma,69a)

The year that he died, he predicted, "This year I an going to die." When they asked him how he knew, he answered, "Every Yom Kippur an elderly man dressed in white and wrapped in white would enter and leave the Holy of Holies with me. Today, though, an elderly man dressed in black and wrapped in black entered with me but he did not come out with me." After the holiday of Sukkot he fell ill for seven days and then he died. That year the kohanim did not mention the Tetragramaton while reciting the priestly blessing (Yoma 39b).

May the merit of the tzaddik Shimon Ha-Tzaddik   protect us all, Amen.