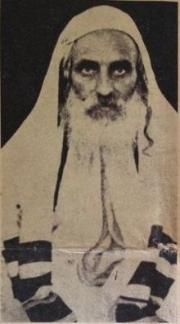 Born in Sanaa, the capital of Yemen to Marie Salem (Shalom). When Ya'akov Sapir Halevi arrived in Yemen on his travels, he met Marie Said al-Avich, the son of Marie Yahya al-Abich the Dayan and the grandfather of Rabbi Avich, who told him about his father, Marie Yahya, who accompanied the Shadar Baruch Shmuel of Pinsk, A student of Rabbi Yisrael of Shklov who went to search for the ten tribes and went on his journey in Yemen.

In his youth he studied with Marie Abraham Kara and later became a student of Rabbi Yahya Kapach. In his youth he was called to serve as rabbi of the "Pinhas" synagogue (the Pinhas family synagogue), lived in the home of the Pinhas family, and even after marrying Rome (nee Giat) he continued to live in their home. Then, in the year 1906, he began to serve as rabbi of the Masuri House Synagogue. Rabbi Avich, who used to be Rabbi Capach's method, Rabbo, the leader of the Dredi Stream, found in the synagogue a mixed public, dreadful and stubborn, Bloody and Shami, And he had to find a way of compromise in the form of prayer, which is why he made only a few changes to the form of prayer, in other cases he agreed with the standard wording, for example, saying the "keter" sacrament in a supper instead of the "sacred" sacred.

He reopened the meeting in the Beit Salah synagogue that closed during the famine years in Yemen. In 1905, following the "Alnafar" siege of Sana'a, the Sana'a community began to organize and set up a tribunal - a legal body acceptable to the Jews recognized by the authorities. One of the elected tribunal members was Rabbi Avich, but he retired within a few months of his election.

After the passing of Rabbi Yechia Yitzhak Halevi in ​​Sivan 1932, he was elected Chief Rabbi, with his aides Rabbi Amram Korah and Rabbi Chaim Sharkey. As was the case with the Yemenite rabbis, he was also a craftsman, jeweler, and carver in the state coin. First he worked as a jeweler with his brother Shlomo, And then with his two sons, Moses and Samuel.

In his capacity as rabbi of Yemen, he taught a great deal, was the judge of the tribunal, slaughtered and mohel, and carried the burden of the public on his shoulders. At a time when he was chief rabbi, the fierce dispute between the stubborns and the Dardas reappeared, and according to Rabbi Amram Korach was elected to the post because of his comfortable temperament, so that he could reconcile the parties.

He had general knowledge of astronomy, geometry and algebra. He was also proficient in Arabic, as well as in English and Turkish. He had many knowledge of medicine, and was a kind of physician for the members of the Jewish and Muslim community of Sana'a.

He was also friends with Muslim scholars as well as with Imam Yahya Hamid a-Din, ruler of Yemen, who was one of his doctors.

He died on Saturday night of the Sara Chai affair, published on 26 January. In his place was appointed Yemen's assistant rabbi, Rabbi Amram Korah.

He has written many books, most of which remain handwritten. Among other things, he wrote comments on the interpretation of the Psalms for the Book of Psalms and the Book of Job, comments on the Bible commentators and the Shas. He also wrote a Q&A, which was lost when he immigrated to Israel.  His letters were printed in the year 5790 on his resume on Mishnah Torah to Maimonides.

May the merit of the tzadik Rabbi Yehiya al-Abaichprotect us all. Amen