Rabbi Shalom Hadaya (October 1864 - 13th of Kislev, October 30, 1944) was Dayan and Kabbalist, head of the Kabbalist Yeshiva of Bethel and one of the great scholars of Aram Tsuba and Jerusalem. 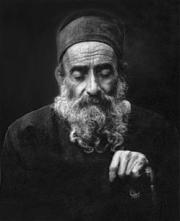 Rabbi Shalom Hadaya (October 1864 - 13th of Kislev, October 30, 1944) was Dayan and Kabbalist, head of the Kabbalist Yeshiva of Bethel and one of the great scholars of Aram Tsuba and Jerusalem.

Rabbi Shalom Hedaya (1864 – 1944), the son of Rabbi Moshe Hayyim Hedaya and Sabtiah Shamah, was orphaned at an early age and was very poor. He was so poor he had no one to take care of him and he considered leaving the path of Torah in order to earn a living. He was fortunate enough to receive help from Rabbi Shelomo Safdeye, Rabbi Ovadiah Moshe Antebi, Rabbi Shmuel Silvera and Senor Aharon Silvera. He was taught by the great Kabbalist Rabbi Moshe Swed, the Av Beit Din Rabbi Yits`haq Bekhor Mizra`hi and later on Rabbi Shaul Sitton, who became Head of the Rabbinical Court in Buenos Aires.

Born in Aram Tsuba, Syria, in 1864, to Rabbi Moshe Chaim and Savtia Hedaya. When he was about 3 years old, he lost his father and his mother and grandmother raised him.
In his youth, he studied with Rabbi Moshe Swede, Rabbi Yitzchak Bechor Mizrahi - Av Beith Hadin (Tribunal) of the Aaram Tsuba  and Rabbi Rafael Yaakov Chaim Israel Alfia

When he was about 20 years old in 1884 (the 17th) he married Sarah, the daughter of Rabbi Yitzchak Laveton, the grandson of Rabbi Chaim Mordechai Laveton.

Already at the age of 18, he was involved in letters with rabbis and arbiters of his generation, such as Rabbi Eliyahu Hamway and Rabbi Isaiah Dayan, the  Av Beith Hadin (Tribunal) of Aram Tsuba . He was also close to Rabbi Shlomo Zafadia and Rabbi Shaul Suhon.

In 1887, he visited Eretz Yisrael and was the guest of the Rishon Lezion Rabbi Yaakov Shaul Elisher at his home.

On his return to Aram Tsuba in 1890 (thirteen years), he became almost blind, and had to study Torah from his memory. Rabbi Hedaya visited Jerusalem in 1890. He developed an illness in his eyes and soon became blind. He traveled to Alexandria, Khedivate of Egypt for surgery and completely recovered there he was analyzed by a famous physician, and his vision was partially returned to him, during which he devoted his essay Shalom Laam (Peace to the People), which discussed the importance of Torah study, justification and the importance of scholars' support to wise students. Part of a complete move to change the face of the Jewish community in Aram Tsuba, with the help of new regulations and arrangements for the benefit of the community and its poor.

. In 1899, he settled in Jerusalem, where he was widely respected. In 1904, he became Judge of the Beit Din for Sephardic Jews and in 1930 he became head of the court. After a time, he became very ill and had to travel to Amman, where he was treated and cured. When Rabbi Hedaya returned to Jerusalem, he became the Rabbi of Beit El Synagogue and was given the title Harav Hachasid.

Shalom Le-Am (Aleppo, 1896);
Degel Ephraim, where he thanks God for the miracles and wonders done for him;
Kisay Shlomo (Jerusalem, 1924); and
Shalom VaTzedek, published in 1948 (the last two chapters were written by his son Rabbi Ovadia Hedaya).

May the merit of the tzadik  Rabbi Shalom Hadaya protect us all. Amen