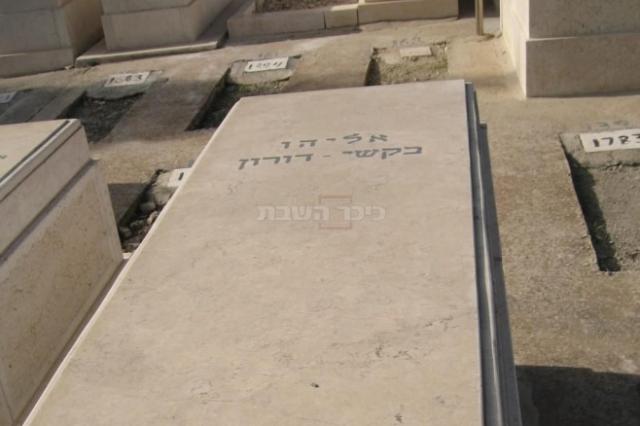 Bakshi-Doron was criticized by Haredi leaders for some of his halakhic (Jewish legal) decisions, and by the Reform movement for his position on assimilation.

Eliyahu Bakshi-Doron was born in Jerusalem to a native-born father, Ben-Zion Bakshi-Doron, and Tova, an immigrant from Aleppo, Syria. He had an older brother, younger brother, and a sister. As a young man, Eliyahu studied in several prominent yeshivas of the Religious Zionist movement. He continued his education at Yeshivat HaDarom, Chevron Yeshiva, and Kol Ya'akov.

Bakshi-Doron married Esther, daughter of the former Chief Rabbi of Akko Shalom Lopes, with whom he had ten children. She died in 2005.

Bakshi-Doron died on April 12, 2020, in Shaare Zedek Medical Center, after contracting the COVID-19 virus during the 2020 coronavirus pandemic in Israel. His condition was exacerbated by previous medical issues

In 1970, Bakshi-Doron started his rabbinic career in the neighborhoods of Ramat Nasi and Ramat Yosef in the coastal city of Bat Yam, Israel. He was appointed Sephardi Chief Rabbi of the city in 1972, and in 1975, in the larger city of Haifa, where he remained for 18 years.

In a 1996 sermon, Bakshi-Doron compared Reform Judaism to the biblical Zimri, who was killed by Phinehas for cohabitation with a Midianite woman. Bakshi-Doron dismissed the resulting uproar as a publicity stunt, saying it was "unthinkable" that anyone would consider his speech an incitement to murder.[citation needed] In January 1999, Bakshi-Doron stated publicly that the Reform movement had harmed Jews more than had the Holocaust. According to Holocaust historian Yehuda Bauer, in other countries, his statement might be considered criminal incitement and antisemitism.

In 1998, Bakshi-Doron met with Turkish Muslim cleric Fethullah Gulen in Istanbul, Turkey. In 2000, Bakshi-Doron and Lau made headlines when they met with Pope John Paul II. It was later seen as a historical precedent that led the way to the 2005 meeting between Chief Rabbis Shlomo Amar and Yona Metzger with the new Pope, Benedict XVI.

In 2000, while visiting the Jewish community in Singapore, Bakshi-Doron declared that he was in favor of giving away parts of East Jerusalem to the Palestinians as a way towards ending the Arab–Israeli conflict. He stipulated that any agreement would have to allow for the Temple Mount to remain in Israeli control

In the sabbatical year of 2000, Bakshi-Doron became involved in a disagreement with some of the leading rabbis in Israel. In order to get around the Jewish legal prohibitions of shmita, in which farmland must lie fallow once every seven years, some Sephardi and Religious Zionist rabbis had allowed the use of the Heter Mechira (land-sale contract), by which farmers could symbolically sell their land to non-Jews for the sabbatical year, thereby permitting them to continue farming. The permits came under fire by Haredi Rabbi Yosef Shalom Eliashiv. Bakshi-Doron and Lau, with the support of former Rishon LeZion Ovadia Yosef, ruled that the permits were valid. When Bakshi-Doron publicly told the farmers that they could rely on the sales, the Haredi newspaper Yated Ne'eman began to leak word that Eliashiv would delegitimize him and put him and his family in herem (ex-communication) if he refused to back down. Distraught, Bakshi-Doron went to meet with President of Israel Moshe Katsav, reportedly bursting into tears. Despite the open support of Katsav and Israeli Prime Minister Ehud Barak, Bakshi-Doron ultimately succumbed to the pressure from Eliashiv. This was widely seen by the National Religious camp as surrender to the Haredim.

On January 21, 2002, Bakshi-Doron took part in an interfaith conference in Alexandria, Egypt. Among those present at the conference were the former Archbishop of Canterbury Dr. George Carey, Rabbi Michael Melchior, the muftis of Bethlehem, and the Palestinian Authority police forces. The attendees issued a joint agreement called the First Declaration of Alexandria of the Religious Leaders of the Holy Land, in which they denounced the ongoing violence in the Middle East. Although the accord received the support of both Ariel Sharon and Yasser Arafat, it had a little perceivable effect. Bakshi-Doron continued to participate in interfaith activities and sat on the Board of World Religious Leaders for The Elijah Interfaith Institute.

Later in 2002, Bakshi-Doron accused Yasser Arafat of attempting to commit "a Holocaust against the State of Israel".

In 2004, Bakshi-Doron spoke out in favor of introducing civil marriage in Israel, saying that the law subjecting members of the different Millets to respective religious authorities had become irrelevant, and was now a source of division and hatred.

In August 2005, Bakshi-Doron, along with Modern Orthodox rabbis Norman Lamm and Aharon Lichtenstein, condemned calls by other prominent rabbis for Israeli Defense Forces soldiers to disobey their orders to dismantle Jewish settlements as part of the Gaza Disengagement.
Bakshi-Doron's 1993 ruling that "Women can be of the Gedolim (great leaders) of the generation and serve as halakhic decisions" attracted attention in light of the controversy over the appointments of women to clerical positions in Orthodox congregations. But in a letter to the Rabbinical Council of America, dated June 23, 2015, Bakshi-Doron clarified his opinion that women could not take up official positions.

May the merit of the tzadik Rabbi Eliyahu Bakshi-Doron protect us all. Amen