Rabbi Marie Yahya  Shoher al-Badihi (October 18, 1803 - October 4, 1887), was a teacher of justice- More Tzedek, and Rosh Yeshiva e "Beit Salah" in Sana'a, the capital of Yemen, and the leader of the Jews in Kochaban . One of the greatest rabbis of Yemen in the 19th century. 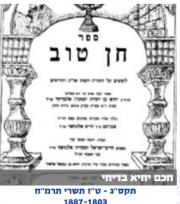 Rabbi Marie Yahya  Shoher al-Badihi (October 18, 1803 - October 4, 1887), was a teacher of justice- More Tzedek, and Rosh Yeshiva e "Beit Salah" in Sana'a, the capital of Yemen, and the leader of the Jews in Kochaban . One of the greatest rabbis of Yemen in the 19th century.

Born in Sanaa to Judea. In his youth, he authored two books. He was versed in both the teachings of the Torat Hanegle and the Torat Hanistar (occult). He made his living writing Torah books. Later, he was appointed to head the general Yeshiva in Sana'a "Beit Salah," which was in the Maharitz synagogue.

In the year 1843, the Jews of Sana'a suffered decrees. Rabbi Badhi, who served as the coinage of the royal house, was arrested with his father for a plot, after a Jew who was in charge of the coin in Yemen was executed, and was persecuted by Muhammad bin Yahya. In age 43he left Sana'a to the city of Cochaban, which was not subordinate to the governor of Sana'im,.  where the Jews received patronage from the heads of the Arab tribes.  He was there for 30 years and made a lot of students. After the Turkish occupied Sana'a, he came back At age 73, despite the entreaties of his students.

Rabbi Badhi died in 16 of Tishrei (1887), a  second Yom Tov  of galuiot, Sukkot. On the same day, the rabbis of the city of Sana'a were eulogized him.   The Shadar Yehezkel Shaul Rufe, of Eretz Israel, protested because according to the custom of the Land of Israel,
there is no right to eulogized in the second Yom Tov.

he did not eulogize him in the second Yom Tov of galuiot, Sukkot.

His son-in-law was Rabbi Saadia Allanadaf, the brother of Rabbi Avraham Allanadaf.

Lehem Toda - Annotation and shortening of the laws of slaughter and foreclosure according to the book "Sha'arei Kedusha" by the Maharitz.
Commentary on "Elijah the Prophet's Prayer" - On the Kabbalah, is compiled a number of "honesty heart" by Rabbi Emanuel Hai Ricky (the essay is included in the book "Chen Tov").

More of his Hand writings

Hen Tov - Innovations on the Bible (some in the way of acceptance) and some Q&A and innovations. At the top of the book is the commentary on the above "Elijah the Prophet" prayer, and songs for the Sabbath. Second generation.
Nekudot Zechut (handwritten).
"Laws of Inheritance" were provided in the file of Or Israel, A, B, E, Bnei Brak, 5770-55.

May the merit of the tzadik Rabbi Marie Yahya  Shoher al-Badihi  protect us all. Amen