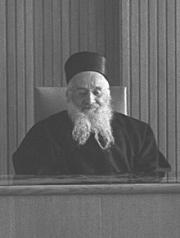 Rabbi Hadaya was born in 1889 in Aleppo, Ottoman Syria, to Rabbi Shalom Hadaya and Sarah levton. On both sides he was a descendant of well-known rabbinical families. His great-grandfather, Rabbi Chaim Mordechai Lebton, was the rabbi of the city. In 1945, he succeeded his father as head of the Yeshivat haMekubalim (Kabbalists Yeshiva) at Beit El Synagogue, the center of kabbalistic study in Jerusalem.
Born in Haleb, Syria,

He was educated in the Talmud Torah "Doresh Zion" and later in the yeshivas "Chesed Avraham" and "Tiferet Yerushalayim", later his father hired the Kabbalist Rabbi Shalom Bohbot to teach him. He also learned from the Kabbalists Rabbi Yitzchak Sharim and Rabbi Yitzchak Alfia. In 1907 he married Tzalha (Shulamit), daughter of Rabbi Ezra Sharim

During World War I,  fled to Aleppo  the terror of being drafted into the Turkish army for about four years. In 1933, when the Porat Yosef Yeshiva was established in the Old City, Rabbi Hadaya was appointed R.M. He was also active in the "Oz and Hadar" yeshiva, a Kabbalist yeshiva that operated within the framework of Porat Yosef and where they prayed according to the intentions of the Aryans, and there he served as a public messenger for many years. He was appointed a judge in the court in Petah Tikva and de facto served as the rabbi of the Spanish community there.

His main essay is a responsa called "Ishkil Abdi" which includes eight volumes, seven were printed during his lifetime and the eighth on the tenth anniversary of his death.

He won the Rabbi Kook Prize in Original Rabbinical Literature - for the fifth part of the Yeshkil Abdi Responsa in 1959, and the Israel Prize for Torah Literature (1958), as well as the award "Ish Yerushalayim" in 1967.

Rabbi Hadaya died on the 20th of Shvat 5769 and was buried in the section of the Sephardic rabbis on Mount of Menuhot.

May the merit of  Rabbi Ovadia Hedaya protect us all. Amen