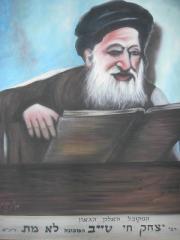 The Power of Charity

There lived in Tunis a worthy Jew named Matzliach. He was a great lover of Torah, though not an outstanding Torah scholar. He was not very rich, but generous in his charity contributions, and he was a God fearing man.

Matzliach the Antique Dealer, as he was known, for he was a dealer in old wares and antiques, was well respected in the community. He was particularly praised for his special custom in connection with Shavuot, the Festival of Mattan Torah. Every year he would invite ten Torah scholars to his home on the first night of Shavuos, for whom he prepared a fine feast. After the feast they would all recite Tikkun and study Torah all night, in honor of the great festival of Receiving the Torah.

Well, Matzliach and his guests certainly observed this custom in a fine way, and it impressed and inspired the whole community. There was not a Jew in Tunisia who did not stay up that night. Old and young gathered in the synagogues to recite Tikkun and learn Torah all night, and special refreshments were served to help keep them awake.

There came a time, however, when Shavuot approached and Matzliach found himself in a difficult situation. Business had not been good, and Matzliach simply had no money, not only for his usual feast, but not even for the needs of his own family in the way of food and wine for Yom Tov. Sadly he told his wife Mazal about his predicament, and she was greatly distressed.  "It is not so much our own need that distresses me," the good woman explained, "but the fact that you cannot keep your fine custom. It is sad to think about it."  "But what can we do?" "Well, I still have my precious earrings," Mazal said, taking them off from her ears. "Here, take them to the pawnbroker and get a loan till things will improve. You should be able to get enough for Yom Tov and for your usual feast. He took the earrings to the pawnbroker and obtained a tidy sum of money against them.

As he was walking home cheerfully, Matzliach met the venerable Rabbi Chai Tayeb, Chief Rabbi of Tunisia. Matzliach greeted the Rabbi respectfully, and the Rabbi returned the greeting, obviously pleased to have met him in the street. "You saved me a trip," the Rabbi said. "I'm going around collecting for our poor, so they, too, can celebrate the Festival of Mattan Torah with joy. "  Without hesitation, Matzliach put his hand in his pocket and gave the Rabbi the money he had just received from the pawnbroker. The smile with which Matzliach gave the money pleased the Rabbi no less than the donation itself.

"God bless you," the saintly Rabbi said, as they parted. Slowly Matzliach continued his way homeward. "What am I going to tell my wife?" he wondered. Suddenly he heard his name called. "Ya, Matzliach! You're just the man I want!" The caller was one of the royal servants of the Bey of Tunis. "His Majesty sent me out to buy a set of antique coffee-cups. I have no idea where to get them. But you are an antique dealer. Get them for me, and you will be amply rewarded," the courtier said. "I will try my best," Matzliach promised. If there were such cups, Matzliach knew where to find them, and find them he did. The dealer Matzliach went to was pleased to get rid of them; he had had them too long and despaired of ever selling them. Now he was pleased to sell them to Matzliach on credit, for he knew the Jewish antique dealer as a trustworthy man.

Walking through the market place, Matzliach met the courtier again, for he was shopping for other things. "Did you manage to find the right cups for me?" the courtier asked eagerly. "Thanks to the One Above, I did." The courtier took Matzliach with the cups to the Royal court and introduced him to the Bey. The king was very pleased with the cups. " Just what I wanted," he said. "I know that the Jews are now busy with preparations for their festival. I am pleased that you took time out to find me these lovely cups. By the way, how are you doing with your preparations for the Festival?" "The truth to tell, your Majesty, I have not yet bought a thing for Yom Tov." The king immediately ordered one of his servants to send to Matzliach's house two sacks of fine flour, a jug of olive oil, and two choice live lambs. Then he asked Matzliach what he owed him for the cups. Matzliach told the king what he paid for them and his usual commission. "What? That's all you paid for these precious cups?" the king said, much surprised. "Well, the ruler of Tunisia is not looking for bargains. You shall be paid their full value!"

Matzliach left the king's palace with a very large sum of money. Walking briskly home, whom should he meet if not the Chief Rabbi, again. "I can now afford to double my donation," Matzliach said happily, as he handed the Rabbi an amount equal to his first generous donation. "Rabbi, your blessing was fulfilled," Matlizach said, and told him how God was kind to him. "Thank God, we both did very well today," the Rabbi said. "Have a happy Yom Tov."

May the merit of the tzaddik Rabbi Chai Tayeb  protect us all, Amen.