Yehudah Aryeh Leib Alter (1847--1905), also known by the title of his main work, the Sfas Emes, was a Hasidic rabbi who succeeded his grandfather, Rabbi Yitzchak Meir Alter, as the av beis din (head of the rabbinical court) and Rav of Góra Kalwaria, Poland (known in Yiddish as the town of Ger), and succeeded the Rebbe, Reb Heynekh of Alexander, as Rebbe of the Gerrer Hasidim. 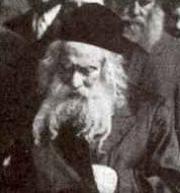 Popularly known as Sefat Emet ("Language of Truth"), the title of his work. Chassidic leader and talmudist.

Because his father, Rabbi Avraham Mordechai, died when Yehudah Aryeh Leib was only 8 years old, he was raised by his grandfather, Rabbi Yitzchak Meir, Chiddushei Harym, the first Gerrer Rebbe. He distinguished himself by the diligence with which he studied Torah, devoting 18 hours each day to mastering Talmud, the Zohar, and Chassidic classics;  becoming a gaon (preeminent  authority) both in niglah and nistar, the reveald and mystical aspects of the Torah.

In 1870 he reluctantly agreed to becoming the second Gerrer Rebbe. His monumental work, Sefat Emet al HaTorah, is a commentary on the Torah in five volumes. His comments stress the moral and ethical lessons to be derived from the text, offering many kabbalistic allusions. The author's vast knowledge, profound wisdom, and total dedication to God and Torah are reflected in all his writings. Sefat Emet on Tractate Kodashim is studied avidly by the entire spectrum of Torah scholars, ranging from chassidic to "Lithuanian."

The title Sefat Emet , taken from the passage Sefat emet tikon la'ad, "Truthful speech abides forever" (Proverbs 12:19), was chosen by his children, who published his works, because it was the last verse on which he commented before his passing.

The Sefat Emet was succeeded by his son, Rabbi Avraham Mordechai Alter, the Imrei Emet, under whose leadership Gerrer Chasidut grew to embrace more than 100,00 chasidim, most of whom were annihilated by the Nazis. The Imrei Emet escaped miraculously. From the ashes of the Holocaust he rebuilt an ever-growing vibrant Gerrer movement, centered around the splendid Yeshivah Sefat Emet in Jerusalem. Today, Gerrer Chasidut spans the globe, making Ger once again a mighty force for Torah-observant Judaism.

May the merit of the tzaddik  Rabbi Yehudah Aryeh Leib Alter of Ger  protect us all, Amen.

Video by ME Production