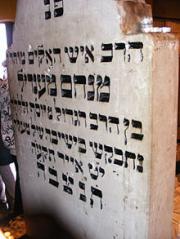 Rabbi Menachem Mendel was one of the pivotal figures in the Chassidic world. He was introduced to the new movement at 11 years of age when he met the great Maggid of Mezritch. As a young man he studied Torah and Chassidut under the illustrious Rabbi Shmelke of Nikolsburg, together with two of his friends - two other future chassidic masters, the Chozeh of Lublin and the Maggid of Koznitz.

Before entering the Beit Midrash of Rabbi Shmelke he was an accomplished talmudist and halachist, having gained a vast range of knowledge in the code of the Rif (Rabbi Yitzchak al-Fasi, 1013-1103). According to the tzaddikim of his time, R' Menachem Mendel was a spark of soul of the Rif, who also appeared to R' Menachem from time to time. It happened once that R' Menachem Mendel begged before God to help him attain a higher spiritual level, and in a dream the Rif instructed him to go to Lizensk to Rabbi Elimelech, where he will merit his spiritual desire.

In Lizensk R' Menachem Mendel was held in high regard for his extraordinary owe of God, which found expression in the burning passion with which he prayed. Upon Rabbi Elimelech's death a large number of his chassidim became followers of R' Menachem Mendel, who settled in Pristik and later moved to Rymanov. His reputation as a kadosh and a baal mofet - a saintly personage and a miracle-worker attracted thousands of followers. At the same time he suffered a great deal from the invective and slurs of mitnagdim (the Jews who were opponents of Chassidism), who maligned him with the government. Among his disciples were such outstanding Chassidic leaders as Rabbi Naftali of Ropshitz and Rabbi Tzvi Elimelech of Dinov.

He saw in the emergence of Napoleon a portent for the advent of the final redemption, and he prayed for his victory.

For 22 years R' Menachem Mendel discussed the secrets of the Man (Manna-heavenly bread in the desert), and by doing so, he was drawing abundance to the entire world.

His thoughts, sermons and discourses were published under the titles Divrei Menachem, Menachem Tzion, and Be'erot HaMayin.

R' Menachem Mendel passed away on the same year (5675) as the Chozeh of Lublin and the Maggid of Koznitz.


In the King's Service
It happened once that the Apter, the Rymanover, and the Chozeh of Lublin were staying in Lanzut, the Chozeh's residence before he moved to Lublin. Evil persons denounced them to the government, and the three rebbes were arrested and imprisoned. It was decided among them that Rabbi Menachem Mendel, who had a good command of the German Language, should be their spokesman at the trial hearing.

The judge asked, "What is your occupation?"
"I am in service of the king," the Rymanover replied.
"What king?"
"The King of kings."
"And what brings you two strangers [the Apter and the Rymanover] to Lanzut?"
"We came to learn from this man [the Chozeh] how to serve the King more zealously"
"And why are you wearing white garments?"
"That is the color of our professional attire."
The judge pronounced his verdict: "We will have nothing to do with such people.
Case dismissed!"

May the merit of the tzaddik Rabbi Menachem Mendel of Rymanov protect us all, Amen.