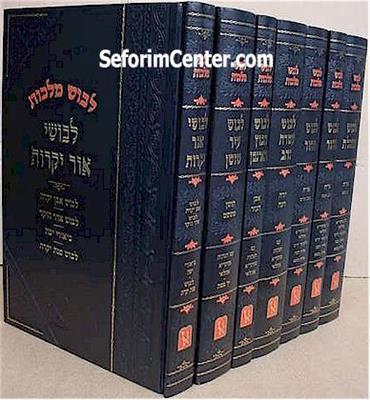 Halachist and Kabbalist. Known by the name "Baal HaLevushim" ("master of the clothes").

Rabbi Mordechai Yaffe - "Baal Halevushim"  was born in Prague and sent to Poland, then the center of the Ashkenazic Jewish world, to learn from Rabbi Shlomo Luria (the Maharshal) and Rabbi Moshe Isserlis (the Rema) the pilpulic method of study (a method of Talmudic study, which stresses very detailed debate upon minutiae in order to arrive at a precise understanding of the text). He studied with the Rabbis of Italy for about ten years thereafter, from whom he gained an influence against the pilpulic method. There he also acquired knowledge in the sciences and philosophy. His teacher of Kabbalah was the Kabbalist, Rabbi Matityahu Delkrat.

While still in his youth, R' Mordechai had the idea to compile a book on Jewish law, which would be used for enabling the making of halachic decisions. When the "Beit Yosef" and afterward "Shulchan Aruch" (Code of Jewish Law) were published by Rabbi Yosef Caro (along with the "Mapa", which are the glosses and addenda of the Rema) – R' Mordechai found them to be missing in several areas, particular in that the did not include the customs which were accepted among the Jews of the Ashkenazic (i.e. Germanic) lands and Eastern Europe. He compiled a work on practical halacha, with the additions of reasons behind various halachic decisions according to reasoning and earlier sources. This work was called "Levush Malchut" (literally "royal vestments"), which was divided into ten sections known as "levushim" (literally vestments), This work gave him his pseudonym "Baal HaLevushim".

Half of this work dealt with halacha, and was compiled in a methodical and orderly fashion, which was unusual at that time among the rabbis of Poland, and it was written in clear and flowing Hebrew. The other part of the book dealt with issues on the commentary of Rashi on the Torah, the "Moreh Nevuchim" (i.e. Guide of the Perplexed), of Maimonides, sciences and kabbalah. The "Levushim" attained fame amongst the people as they were published, even among their opponents, and after some time, they took their place in the Yeshiva curriculum along with the "Tur", and the "Shulchan Aruch", and to some degree even took precedence.

R' Mordechai also paid great attention to the development of Jewish civil law. He was very strong willed, and he did not play halachic favoritism even to the greatest men of the generation, and he lashed out very strongly against those who were lenient in the law of benefiting from interest via a "heter iska". The shunning of financial gain (literally: hatred of money) was one of the seven characteristics which he wished to see in any Jewish judge, alongside wisdom, humility, fear of heaven, love of truth, love of fellowmen, and the acceptability of the judge to his fellowmen (according to the "Levush Ir Shushan").

We do not know exactly when Rabbi Mordechai was appointed to the rabbinical seat of Grodno, which was the first city who appointed him as head of the rabbinical court. According to the first historian of the Jews of Grodno, Shimon Eliezer Friedenstein, in his work "Ir Giborim" (Vilna 1870, page 39), we have reason to believe that he arrived in that city prior to 1577. We also do not know for exactly how many years he served in his position in Grodno, but it is related that "he could not dwell there alongside his rival the Gaon Reb Moshe, the head of the Yeshiva, the brother of Reb Shlomo Efraim of Luntshitz", and he moved his place of residence to Lublin.

This city, in which one of the greatest business fairs of Poland took place at that time, served as a center for Torah judgement among thousands of Jews from all corners of the kingdom, who came there for business purposes. R' Mordechai became the head of the rabbinical court of Lublin, , and he was active in all manner of communal affairs. He was one of the heads of the "Council of Three Lands" (the precursor to the "Council of Four Lands" – the central, high, independent umbrella organization of the Jews of all Poland). In 1590 Rabbi Mordechai Yoffe, along with 30 other Rabbis of Poland and Lithuania signed an agreement that prohibited a rabbi from receiving any money or gifts or loans for the role of Rabbi, either directly or to themselves or to other people.

Rabbi Mordechai Yaffe, author of the Levush, was not only a rabbi and a Halachic arbiter, but he also dedicated himself to the study of astronomy and philosophy (He included a lesson on astronomy in his commentary on Rambam's Hilchot Kiddush HaChodesh); and based on what he read in and learned from astronomy texts, he changed the measurement of halachic hours which had been accepted unanimously by the Halachic arbiters before his time. As he himself testified in the book Levush Malchut, the Laws of the Afternoon Prayers, halacha 233, "It seems to me that it means to say 12 hours from the sunrise until the sunset, for thus it is written in all astronomy texts." And in paragraph 267 he wrote: "But I say that perhaps in their [the early Halachic arbiters'] times they did not deal with astronomy texts and they thought that the day which the rabbis always divided into 12 hours is from dawn to when the stars appear. Yet it seems to me clear, from the works of the Divine astronomers, that the above view is a complete mistake." Thus testified a great and courageous Halachic arbiter who stood up for his opinion and changed an explicit halacha simply because the astronomy books taught him that the day and night are not divided as his rabbis told him, but as the gentile astronomers taught.

Rabbi Mordechai Yaffe passed away in Posen, where he served as rabbi toward the end of his days.

The story goes back ten generations to the time of Rav Mordechai Yaffe, the author of the Levushim, an epithet given to him because of his brilliant, scholarly works, each entitled Levush, i.e. Levush Techeilas, Levush Malchus, etc. As his family name was Yaffe, which was derived from the Hebrew word yafeh, beautiful, so was R' Mordechai a man of captivating physical appearance. His visage was something to behold. It is quite possible that his last name was directly associated with his appearance.

"One day Rav Mordechai's good looks almost became the source of his downfall. Similar to what occurred to Yosef HaTzaddik, he was confronted with an overwhelming challenge. A beautiful gentile woman was so enchanted with his appearance that she did everything possible to encourage him to sin. When R' Mordechai realized what was occurring, he was determined to ward off her blandishments-even at the expense of his own life.

Outside of the house was a canal filled with sewage. He immediately jumped into the foul-smelling water. The stench on his clothes was so overpowering that the woman was "turned off"  and left R' Mordechai. The sewage seeped through all of Rav Mordechai's ten garments that he was wearing at the time. Indeed, the garments that clothed him were filthy and foul-smelling, but his neshamah, soul, and moral character remained as pure as before. In the merit of his self-sacrifice to triumph over the yetzer hara (evil inclination), God gave him the ability to author ten volumes of halachic treatise which he named Levushim, garments, corresponding to the ten garments that had become soiled. The ten garments which saved him would yield ten books, that would inspire a world of Torah students. At that moment, R' Mordechai turned his eyes Heavenward and in emotional prayer beseeched God, 'The next ten generations that will descend from me should be repulsive in appearance, so that they should not encounter the challenges associated with physical beauty.'

"The ten generations, ten generations of descendants whose physical appearance was far from appealing," continued Reb Yitzchakel's father, "ended with my son. He is the eleventh generation, with him the beauty begins anew. The external beauty and inner spiritual, moral beauty that reigned coincidentally in my sainted grandfather has returned to my son."          (as told by the father of Yitzchak Krakowsky of Lodz, 10th generation from Rabbi Mordechai Yaffe)

May the merit of the tzaddik  Rabbi Mordechai Yaffe  protect us all, Amen.