Levi was the son of Yaakov (Jacob) the Patriarch and Leah the Matriarch. He is the founder of the Tribe of Levi.

Levi (or Levy) (, Hebrew: לֵּוִי‎; Standard Levi Tiberian Lēwî) was, according to the Book of Genesis, the third son of Jacob and Leah, and the founder of the Israelite Tribe of Levi (the Levites) and the grandfather of Aaron and Moses. Certain religious and political functions were reserved for the Levites.

The Torah suggests that the name of Levi refers to Leah's hope for Jacob to join with her, implying a derivation from yillaweh, meaning he will join, but some Biblical scholars have proposed quite different origins of the name. These scholars suspect that it may simply mean priest, either as a loan word from the Minaean lawi'u, meaning priest, or by referring to those people who were joined to the ark of the covenant. Another possibility is that the Levites originated as migrants, and that the name Levites indicates their joining with either the Israelites in general, or the earlier Israelite priesthood in particular. In the Book of Jubilees 28:14-15; it says that Levi was born "in the new moon of the first month" which means that he was born on 1 Nissan. 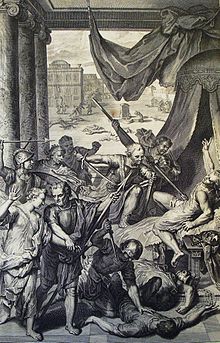 Levi and the "Blessing of Jacob"

In the Book of Genesis, Levi and his brother, Simeon, exterminate the city of Shechem in revenge for the rape of Dinah, seizing the wealth of the city and killing the men.The brothers had earlier misled the inhabitants of Shechem by consenting to Dinah's rapist marrying her, and when Jacob hears about their destruction of Shechem, he castigates them for it. In the Blessing of Jacob, Jacob is described as imposing a curse on the Levites, by which they would be scattered, in punishment for Levi's actions in Shechem. Some textual scholars date the Blessing of Jacob to a period between just one and two centuries prior to the Babylonian captivity, and some Biblical scholars regard this curse, and Dinah herself as an aetiological postdiction to explain the fates of the tribe of Simeon and the Levites, with one possible explanation of the Levites' scattered nature being that the priesthood was originally open to any tribe, but gradually became seen as a distinct tribe itself (the Levites). Nevertheless, Isaac, Levi's grandfather, give a special blessing about the lineage of priests of God.

The family of Levi

In the Book of Genesis, Levi is described as having fathered three sons—Gershon, Kohath, and Merari.A similar genealogy is given in the Book of Exodus, where it is added that among Kohath's sons was one—Amram—who married a woman named Jochebed, who was closely related to his father, and they were the biological parents of Moses, Aaron, and Miriam; though some Greek and Latin manuscripts of the Torah state that Jochebed was Amram's father's cousin, the Masoretic Text states that she was his father's sister, and the Septuagint mentions that she was one of his father's sisters. The Masoretic Text's version of Levi's genealogy thus implies (and in Numbers 26:59, explicitly states) that Levi also had a daughter (Jochebed), and the Septuagint implies further daughters. The names of Levi's sons, and possible daughter, are interpreted in classical rabbinical literature as being reflections on their future destiny. In some apocryphal texts such as the Testaments of the Twelve Patriarchs, and the Book of Jubilees, Levi's wife, his children's mother, is named as Milkah, a daughter of Aram.

Some scholars attribute the genealogy to a hypothetical Book of Generations, a document originating from a similar religiopolitical group and date to the priestly source. According to some Biblical scholars, the Torah's genealogy for Levi's descendants, is actually an aetiological myth reflecting the fact that there were four different groups among the Levites – the Gershonites, Kohathites, Merarites, and Aaronids. Aaron—the eponymous ancestor of the Aaronids—couldn't be portrayed as a brother to Gershon, Kohath, and Merari, as the narrative about the birth of Moses (brother of Aaron), which textual scholars attribute to the earlier Elohist source, mentions only that both his parents were Levites (without identifying their names). Some Biblical scholars suspect that the Elohist account offers both matrilinial and patrilinial descent from Levites in order to magnify the religious credentials of Moses.

May the merit of the tzaddik Levi ben Yaakov Avinu   protect us all, Amen.