Leader of Israeli nation after Moses. 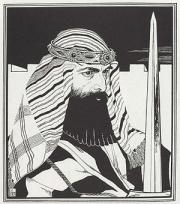 Yehoshua married Rachav, who gave shelter to the two spies (Yehoshua 1). In Shaar HaGilgulim (hakdama 36) the Ari, Rabbi Yitzchak Luria says that Rachav was a very holy soul and it wasn't in vain that Yehoshua married her.

The face of Moshe (Moses) was like the sun, the face of Yehoshua like the moon (Bava Batra 75a).

Yehoshua did not call himself a servant of God, but the Holy One, Blessed is He, called him that (Sifri Va'etchanan 27).

His coin had an ox on one side and a re'em, an animal with majestic horns, on the other (Yalkut Shimoni, Yehoshua 17).

When Hashem told Moshe whom to choose as the next leader, he said to him, "Take yourself Yehoshua son of Nun (Numbers 28:18) who is a hero like yourself" (Sifri Vayeilech 305).

The poor man uses entreaties (Proverbs 18:23) refers to Moshe who did not enter the Holy Land. But the rich man answers impudently (ibid.) refers to Yehoshua who entered and said, "Would that we had been content and dwelt beyond the Jordan (Joshua 7:7), and not entered the Land of Israel!" He said this when thirty-six Jews fell in the battle of Ai (Sanhedrin 44a).

Calev son of Yephuneh the Kenizite and Yehoshua son of Nun were equal to one another (Tosefta, end of Kritut).

When Yehoshua left the camp of Israel to wait at the bottom of Mount Sinai for the return of Moshe, manna fell for Yehoshua just as it fell for the whole community of Israel (Yoma 76a).

Manna fell on his limbs, and he would take it and eat it (Mechilta Beshalach 4:3).

Yehoshua circumcised the people of Israel in Egypt, as it is written, Hashem said to Yehoshua, "Return and circumcise the Children of Israel a second time" (Joshua 5:2) (Shemot Rabbah 19:5).

Moshe received the Torah from Sinai and transmitted it to Yehoshua, and Yehoshua to the Elders (Avot 1:1).

Yehoshua was elevated only because he occupied himself with Torah study continuously (Mishnat Rabbi Eliezer13).

Yehoshua sat and expounded, and everyone knew that he was expounding the teachings of Moshe (Yerushalmi Shekalim 2:5).

Even in matters that he had not heard from Moshe, his own reasoning corresponded with what had been told to Moshe at Sinai (Yerushalmi Pe'ah 1:1).

Seeing how precious the words of Torah were to Yehoshua, the Holy One, Blessed is He, said to him, 'This Book of the Torah will not leave your mouth" (Joshua 1:8) (Menachot 99b).

He made himself like a fool before our teacher Moshe, whom he troubled to teach him Torah every minute until he had learned the entire Torah (Midrash HaGadol, end of Devarim).

Yehoshua wrote these words in the book of the Law of God (Joshua 24:26). Yehoshua wrote in his Book words concerning the cities of refuge, see Joshua 20, that are written in the Torah (Makkot 11a).

Moshe the servant of Hashem died there (Deuteronomy 34:5). Moses wrote the whole Torah up to that verse. The rest was written by Yehoshua son of Nun (Menachot 30a).

Yehoshua took the Book of Deuteronomy, displayed it to the sun, and said, "Because I have never ceased studying this book, you should cease your movement at my request" (Bereishit Rabbah 6:9).

If someone asks, "Why did Yehoshua build an altar on Mount Eval? Was there no Tabernacle?" answer him that the Holy One, Blessed is He, said, "It is I who told him to do so" (Bamidbar Rabbah 14:1).

When our teacher Moshe was about to depart for Paradise, he said to Yehoshua, "Ask me all the questions that you have." "My teacher," replied Yehoshua, "did I ever leave you for a short time and go elsewhere? Did you not write of me, He does not leave the tent (Exodus 33:11)?"      Immediately Yehoshua's intellectual powers were weakened so that he forgot 300 laws and had 700 uncertainties. All the Israelites rose to kill him. The Holy One, Blessed is He, said to him, "To tell you what you do not know is impossible. Go and distract them with war to capture the Land of Canaan" (Temurah 16a).

Three thousand laws were forgotten in the period of mourning for Moshe. The people said to Yehoshua, "Ask God." He replied, "It is not in the heavens" (ibid.).


The Death of Yehoshua

Yehoshua did not rebuke Israel until he was near death (Sifri Devarim 2).

It is written, "As I God was with Moshe, so will I be with you" (Joshua 1:5). Yehoshua should therefore have lived for 120 years like our teacher Moses. Why were ten years deducted from his life? At the time the Holy One, Blessed is He, said to Moshe, "Avenge the Children of Israel of the Midianites, afterward you will be gathered to your people" (Numbers 31:2). Although he was told he would die, he did not delay, but acted quickly: And Moshe send them (ibid. v. 6). But when Yehoshua came to fight the thirty-one Kings of Canaan, he said, "If I slay them immediately, I will die immediately, just as Moses did." What did Joshua do? He began to delay the wars against them. The Holy One, Blessed is He, said to him, "Since you have done that, I will shorten your life by ten years" (Bamidbar Rabbah 22:6).

Before the sun of Yehoshua set, the sun of Othniel son of Kenaz had arisen (Bereishit Rabbah 58:2).

When Yehoshua was born, no one took note, when he died, all of Israel took note. However, the Israelites were lax in doing kindness with Yehoshua son of Nun by mourning him properly. One was busy with his vineyard, the other with his field, yet another with his coal. The Holy One, Blessed is He, therefore sought to make the whole world quake, as it is written, They buried him, north of the Mount of Eruption (Joshua 24:30) (Midrash Shmuel, ed. Buber, 23:7).