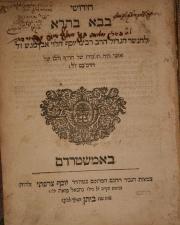 At a tender age, R' Yosef displayed great talents and sharp wit. Rabbi Yitzchak Albaliah predicted that the child would become a great luminary in the Torah world and implored Yosef's father to provide him with outstanding teachers and to dedicate all of the youth's time to learning.

At the age of 12, R' Yosef traveled to Lucena, to continue his studies. Raabi Yitzchak Alfasi's (Rif) praise of R' Yosef was unbounded, and although his own son R' Yaakov was an eminent sage, Rif designated the youthful R' Yosef  to be his successor.

As head of the famous academy of Lucena, R' Yosef taught numerous disciples including Rabbi Maimon, father of Rambam. Rambam's praise of R' Yosef in uncharacteristically ecstatic. "The depth and scope of his wisdom astound all who study his words" said the Rambam. Having absorbed R' Yosef's teachings from his father, Rambam refers to R' Yosef as "my teacher".

Rabbi Yosef also replied to halachic inquiries sent to him from all the Sephardic communities, and his sharp intellect was apparent in correspondence as well as in his discourses. A small portion of his extensive responsa has been published under the title Sheilot U'Teshuvot HaRi Migash. Rabbi Yosef composed commentaries to many Talmudic tractates, of which only those to Bava Batra and Shevuot have been published.

May the merit of the tzaddik  Rabbi Yosef HaLevi Ibn Migash  protect us all, Amen.