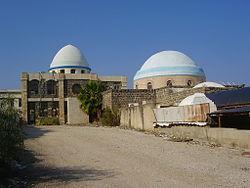 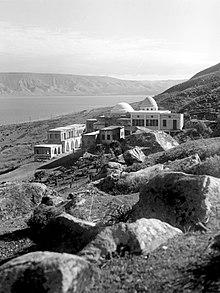 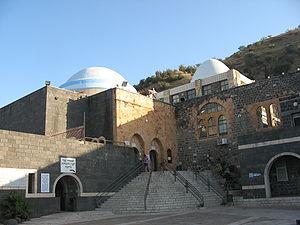 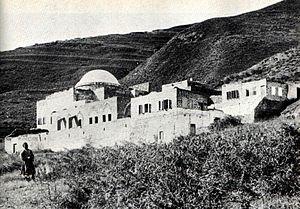 Visit to the resting site of Rabbi Meir in Tiberias, Israel

He was a descendant of proselytes (Gittin 56a).

According to the Talmud his real name was not R' Meir but R' Nehorai (or R' Measha, or R' Nechemiah, (Dikdukei Soferim) , and he was called R' Meir ("the illuminator") because "he enlightened the eyes of the scholars in halacha" (Eruvin 13b).

His wife was the famous wise woman, Beruriah. She advised him wisely when neighboring wicked people disturbed him (Berachot 10a), and when their two sons died she broke the news gently and comforted him (Midrash Mishlei 31).

He had two sons who died, and a daughter (Kedushin 81). His son-in-law was Zivsai (Kohellet Rabbah 9:8).

He was a scribe (Eruvin 13; Gittin 67; Sotta 20a). He was once someplace where there were no books, so he wrote the entire Magillat Esther from memory (Megillah 18b).

He earned three selahs a week. He purchased food and drink with one selah, clothing with the second selah, and he gave the third to Torah scholars. When he was asked by his students what would remain for his children, he answered: "If they will be righteous, it will be as King David said 'I have never seen a tzaddik neglected and his children begging for bread.' If not, why should I leave from my own for the enemies of God?" (Kohellet Rabbah 2:17).

The Talmud states, "An anonymous mishnah [represents the view of] R' Meir, following that of R' Akiva" (Sanhedrin 86a; Jerusalem Talmud, Yevamot 4:11, 6b). Almost all his numerous statements are written anonymously, as acherim omerim ("others say").

He was one of the five scholars ordained by R' Yehudah ben Bava during the persecutions following the Bar Kochva revolt (Sanhedrin 14). The other scholars include R' Yehudah, R' Yose, R' Shimon bar Yochai, and R' Elazar. R' Meir had been previously ordained by R' Akiva (Sanhedrin 14a). It was said that after R' Akiva's students died, he went to "our rabbis in the South" and taught them, and they "erected the Torah at that time" (Yevamot 62b), and that those five sages "stood up and filled the whole of the Land of Israel with Torah" (Breisheet Rabbah 61:3).

He and other sages were forced to flee Eretz Yisrael or hide during the persecutions following the Bar Kochvah revolt. He was also present in Usha, where there was a renewal of the office of Nassi and of the Sanhedrin, which had not been in existence during the revolt and subsequent persecutions. Rabban Shimon ben Gamliel was appointed Nassi, Rabbi Natan av beit din, and R' Meir was appointed chacham (Horayot 13b).

At one point R' Natan and R' Meir attempted to dismiss Rabban Shimon ben Gamliel, but they were unsuccessful. There was an attempt to excommunicate R' Meir, but that was also unsuccessful (Jerusalem Talmud Moed Katan 3:1, 81c). As punishment for his opposition to the Nassi, it was decreed that all subsequent statements statements made by R' Meir would be written in the Misnah anonymously, as acherim ("others") (Horayot 13b).

He divided his lectures into three parts: one third halacha, one third aggadah, and one third parables. He had 300 fox fables that he would relate to season his lectures, of which three have been preserved (Snahedrin 38b). The sages said that with the death of Rabbi Meir ceased the composers of fables" (Mishnah, end of Sotta).

He used to deliver a lecture every Friday evening. The Midrash tells of a woman who once attended R' Meir's Friday night lecture. She returned very late and the shabbat candles had already burned down. Her irate husband demanded to know where she had been and she explained that she had been attending R' Meir's lecture. He brashly swore that she would not be allowed to enter the house until she'd spit in the face of R' Meir.   As she left the house, Eliyahu Hanavi (Elijah the Prophet) appeared before R' Meir and told him that on his account, a woman is being banished from her house. When R' Meir heard the whole story, he went and sat in the beit midrash (study hall). When he saw that woman approaching, he acted as if he had a serious eye problem.  "Do you know how to cure an eye problem?", he asked the startled woman. "No, I do not", she stammered. "Well then quickly, right now, spit seven times in my face and that will alleviate the problem." The dazed and astonished woman did as she was asked and spat the seven times. R' Meir then said to her: "go and tell your husband that he had asked you to spit once and you spat seven times!".

The astounded students asked R' Meir if the husband and wife's spat needed to be ended through such a thorough degradation of the Torah's honor. "We would have brought him here, whipped him and forced him to take back his wife!", they exclaimed.

"Should the honor of Meir be greater than the honor of Hashem?!", was R' Meir's piercing response. "Hashem instructed us to blot His holy name onto the water that a woman suspected if adultery drinks, in order to establish her innocence and restore peace to their relationship. I certainly won't be concerned about my honor!"

Why was he called, "Ba'al Haness" ("the Master of the Miracle")? Rabbi Meir was married to Beruriah, the daughter of Rabbi Chananiah ben Teradyon, one of the ten martyrs. The government ordered Rabbi Chanina's and his wife's execution for teaching Torah publicly. They decreed that his daughter (Beruriah's sister) should live a life of shame. She was placed in a brothel.

Beruriah asked her husband to save her sister. R' Meir took a bag of gold coins and went to the brothel disguised as a Roman horseman. When he discovered that Beruriah's sister kept her chastity he offered the money as a bribe to the guard. The guard replied, "When my supervisor comes, he will notice one missing and kill me." R' Meir answered, "Take half the money for yourself, and use the other half to bribe the officials." The guard continued, "And when there is no more money, and the supervisors come - then what will I do?" R' Meir answered, "Say, ‘The God of Meir - answer me!' and you will be saved." The guard asked, "And how can I be guaranteed that this will save me?" R' Meir replied, "Look - there are man-eating dogs over there. I will go to them and you will see for yourself." R' Meir walked over the dogs and they ran over to him to tear him apart. He cried, "God of Meir - answer me!" and the dogs retreated. The guard was convinced and gave him the girl. When the group of supervisors came, the guard bribed them with the money. Eventually, the money was used up, and it was publicized what had happened. They arrested the guard and sentenced him to death by hanging. They tied the rope around his neck and he said, "God of Meir - answer me!" The rope tore, much to everyone's amazement. He told them the incident, and they went after R' Meir. The guard was saved.

From then on, we have a tradition that when a Jew finds himself, Heaven forbid, in any sort of crisis, he should give charity for the benefit of Torah students in Israel, which ever yeshivah it may be, and should dedicate the charity in memory of R' Meir Baal Haness. He should then say, "God of Meir - answer me! God of Meir - answer me!" and will merit salvation from his crisis.

Rabbi Meir was buried in Teveria, in a standing position. The Ari haKadosh verifies that in Shaar HaGilgulim.

May the merit of the tzaddik  Rabbi Meir Ba'al HaNess  protect us all, Amen.