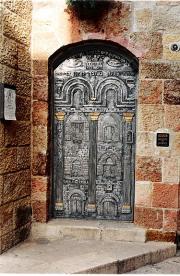 In the early 1700's scholars of the mystic gathered in groups and even established special yeshivot to labor over the Ari's kabbalistic teachings. One of the most successful was that of Rabbi Gedalyah Chayun, who gathered the greats of his generation and, in 1732 founded the famous Beit El Yeshivah which studied Kabbalah according to the Ari's approach.

And then Rabbi Shalom Sharabi (the Rashash) arrived from Teiman (Yemen), to study Kabbalah in Jerusalem. He was modest and reticent. He seemed to be a simple shammash. But the day came when his greatness was acknowledged by all. Rabbi Shalom married Chana, the daughter of Rabbi Gedalyah Chayun, and after R' Gedalyah's death, became the head rabbi in the yeshivah. Thanks to his sanctity and intellectual brilliance, he succeeded in explaining the words of the Ari to the students of Beit El.

May the merit of the tzaddik Rabbi Gedalyah Chayun  protect us all, Amen.