Rabbi Ovadia Yosef was a Talmudic scholar, an authority on Jewish religious law (halakha), and longtime spiritual leader. Born in Iraq, he was the Sephardi Chief Rabbi of Israel from 1973 to 1983. Yosef's responsa (religious law rulings) were highly regarded within Haredi circles, particularly among Mizrahi communities, among whom he was regarded as "the most important living halakhic authority." 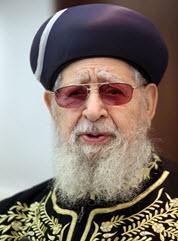 Rabbi Ovadia Yosef was born to an Iraqi Jewish family, in Baghdad, Ottoman Iraq on September 24, 1920 (or in 1918) to Yaakov Ben Ovadia and his wife, Gorgia. His Arabic name was ‘Abdullah Youssef. In 1924, when he was four years old, he immigrated to Jerusalem, Mandatory Palestine, with his family. In Palestine, the family adopted the surname "Ovadia".] Later in life, Ovadia Yosef changed his surname to be his middle name, "Yosef", to avoid the confusion of being called "Ovadia Ovadia".

As a teenager he studied at the Porat Yosef Yeshiva, where he advanced to the highest level class taught by the rosh yeshiva, Rabbi Ezra Attiya.

A story retells how Attiya was instrumental in keeping the young Yosef in the Torah world. At one point, the diligent young scholar suddenly stopped coming to yeshiva for several days. Attiya paid a visit to his home and was shocked by the poverty he saw there. Yosef's father explained that he ran a small grocery and needed the boy to work for him. Attiya attempted to convince the father of the importance of Torah learning, to no avail. The next morning, when the father entered his store, he found Attiya standing there, wearing a work apron. The rosh yeshiva explained that he had come to the store early that morning when Yosef was opening up. He had told the youth that he had found a substitute worker who would work without pay, and sent him back to yeshiva. "You said that you needed someone to help and could not afford to pay. I am that someone. Your son's learning is more important than my time!" he told the father, who finally conceded and allowed his son to continue learning in yeshiva.

Yosef received rabbinic ordination at the age of 20. He became long-time friends with several members of his class who went on to prominent leadership positions in the Sephardi world, such as Rabbi Ben Zion Abba Shaul, Rabbi Baruch Ben Haim, Rabbi Yehuda Moallem and Rabbi Zion Levy.

Residing in Egypt
In 1947 Yosef was invited to Cairo by Rabbi Aharon Choueka, the founder of yeshiva 'Ahavah VeAchvah', to teach in this yeshiva. Yosef also served, at the request of Rabbi Ben-Zion Meir Hai Uziel, as head of the Cairo beth din (rabbinical court). Yosef found that religious observance among both the Jewish community at large, and its leadership, including the local Rabbis, was lax. One of the major Halachic issues was the lack of any organised system of Kashrut, which led to conflict between him and other members of the community. Following these events Yosef resigned from his position, two years after having arrived in Cairo. Approximately one year after his resignation, he returned to what, in the meantime, had become Israel.

Return to Israel
After returning to Israel, Yosef studied at midrash "Bnei Zion", then headed by Rabbi Tzvi Pesach Frank. He also served on the rabbinical court in Petah Tikva. His boldness as a posek was already revealed in his first term as a dayan when, at the age of 30, he wrote a Halachic ruling permitting Yibbum instead of Halitza which contradicted a religious ruling made by the Chief Rabbinate of Israel a year earlier which had forbidden Yibbum.

In 1951–1952 (תשי"ב by the Jewish calendar) he published his book on the laws of Passover titled 'Chazon Ovadia.' The book won much praise and received the approval of, among others, the two Chief Rabbis of Israel at that time, Ben-Zion Meir Hai Uziel and Yitzhak HaLevi Herzog. Two years later he founded 'Or HaTorah' Yeshiva for gifted Sephardic Yeshiva students. This Yeshiva (which did not remain open for long) was the first of many which he established, later with the help of his sons, in order to facilitate Torah education for Sephardic Jews and establish the leadership of the community for future generations. In 1953-4 (תשי"ד) and 1955-6 (תשט"ז) he published the first two volumes of his major work 'Yabia Omer', which also received much praise.

Sephardic Chief Rabbi of Israel
In 1973 Yosef was elected the Sephardic Chief Rabbi of Israel by a majority of 81 to 68 votes, replacing Yitzhak Nissim. His candidacy was criticised by some as he was competing against an incumbent Chief Rabbi. The election process was characterised by tension and political controversy because of the Psak Din of the Brother and Sister and tense relations between Yosef and Nissim. The tension between the two Rabbis began in the 1940s, when Yosef came out openly against the Halachic rulings of the Ben Ish Chai. In the same election, Rabbi Shlomo Goren was chosen as the Ashkenazi Chief Rabbi of Israel. The relationship between the two Rabbis was difficult. The Council of the Chief Rabbinate was controlled by Goren, and for some time Yosef decided that, as a consequence, there was no point in attending its sessions. During his years as Chief Rabbi, Yosef dealt with a variety of important social and Halachic issues (See: Halakhic Authority below).