Known as the Rogatchover Gaon, ("Genius of Rogachev"), and also often referred to by the title of his main work Tzofnath Paneach ("Decipherer of Secrets") 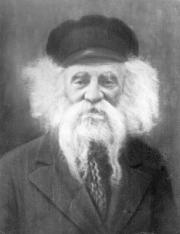 Joseph Rosen (Yiddish: יוסף ראָזין, Yosef Rosin), known as the Rogatchover Gaon, ("Genius of Rogachev"), and also often referred to by the title of his main work Tzofnath Paneach ("Decipherer of Secrets"), (Rogachev, 1858 – Vienna, 5 March 1936), was a rabbi and one of the most prominent talmudic scholars of the early 20th-century, known as a genius (gaon) because of his photographic memory and ability to connect sources from the Talmud to seemingly unrelated situations. He has been described as the foremost Talmudic genius of his time.

He was born in Rogachev, now in Belarus, into a Hasidic family of Lubavitcher Hasidim, and was educated in the local cheder (Torah school for small children). His unusual capabilities were noticed at the age of thirteen, when he was sent to study in Slutzk along with Rabbi Chaim Soloveitchik, five years his senior, under the Beis Halevi, Rabbi Yosef Dov Soloveitchik. He subsequently studied under Rabbi Yehoshua Yehuda Leib Diskin (Maharil Diskin) in Shklov. He then assumed (in 1889) the rabbinate of the Hasidic community in Dvinsk for almost 50 years, where his non-Hasidic counterpart was Rabbi Meir Simcha of Dvinsk; they served in parallel until the late 1920s, and enjoyed excellent relations.

Among those who received semicha (Rabbinic ordination) from him were the seventh Lubavitcher Rebbe, Rabbi Menachem Mendel Schneerson; Rabbi Mordecai Savitsky (1911-1991) of Boston; Rabbi Zvi Olshwang (1873–1959?) of Chicago, who was a brother-in-law of Rabbi Shimon Shkop; and Rabbi Avraham Eliyahu Plotkin (1888-1948), the author of Birurei Halachot (a copy of the actual semicha is included in that work).

The Rogachover is remembered for his breadth of Torah knowledge and caustic wit. He did not suffer inadequacy lightly. He was similarly reputed to rarely quote any rabbinic authority post-Maimonides, and avoided recent rabbinic works of the Achronim in favour of the Rishonim (those preceding the late 15th century). His responses to queries of Jewish law are generally enigmatic and cryptic.

He died in Vienna in 1936 following unsuccessful surgery.

Throughout his life, despite not being an official Lubavitcher Chassid, he maintained very close connections to Lubavitcher Chabad Chassidim and their Rebbeim, Rashab and Rayatz (after Rashab's death, he supported the decision to appoint the young Rayatz as the new Rebbe). The Rogatchover is a famous figure in Chabad Lubavitch folklore; his name often comes up in stories told in yeshivas and during farbrengens—content ranging from self-sacrifice and dedication to Torah values despite the pressures of Russian government, to special sensitivity of spiritual dimension of the Torah (in Chassidus and Kabbalah), to his genius in the revealed Torah. The Lubavitcher Rebbe, Rabbi Menachem Mendel Schneerson once quoted the Rogachover, who said that the whole Judaism to him could be condensed into ten basic ideas, and were he to be smarter, it would be only one idea.

The Rogatchover was a noted Talmudic scholar and published a number of his works on Talmud and Maimonides. His main work, a commentary on Maimonides, was published during his lifetime, as were five volumes of halachic responsa. The remainder of his surviving writings appeared in the United States and Israel many years after his death; all are titled Tzofnath Paneach"decipherer of secrets", (a title given to the Biblical Joseph by Pharaoh (Genesis 41:45)). His manuscripts were smuggled out of Latvia in the form of micro photographs sent via mail to the Safern family in the Bronx at the outbreak of the World War II by his successor, Rabbi Yisrael Alter Safern-Fuchs (1911–1942).