Rabbi Yishmael was the Kohen Gadol (high priest) at the end of the Second Temple period, and one of the Asara Harugei Malchut(Ten Martyrs). 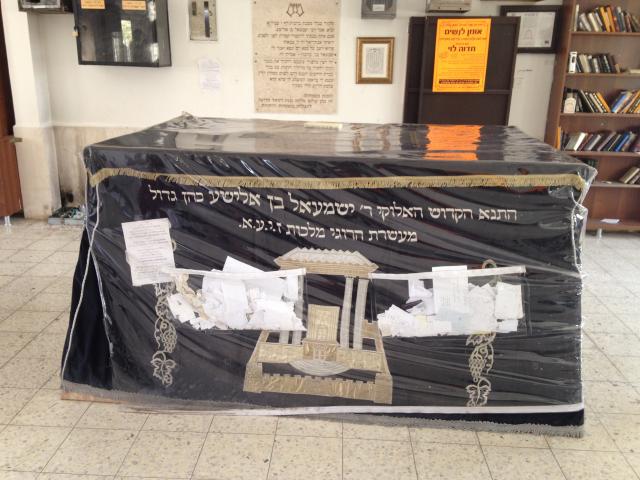 Rabbi Yishmael was the Kohen Gadol (high priest) at the end of the SecondTemple period, and one of the Asara Harugei Malchut (Ten Martyrs).

He said: "Once I entered the inner sanctuary (in the Temple) to offer the incense and I saw God sitting on a high and exalted throne. He said to me, 'Yishmael, my son, bless me,' and I said to him, 'may it be your will that Your compassion should be revealed over Your other attributes and You should conduct Yourself toward Your children with compassion and beyond the letter of the law,' and He nodded His head"  (as if agreeing to the blessing and answering "Amen," Rashi)
(Tractate Berachot p. 7a)

The Ten Martyrs
Lupinus the Roman Emperor at the time was studying Torah and asked the ten great sages of that time: "What is the law according to your Torah, for a Jew who sells another into captivity?" (referring to the sale of Joseph by his brothers) "Capital Punishment," answered Rabbi Akiva and his colleagues."But, Yosef's brothers were never punished for their crime!" the Roman protested,
and then began to set his deadly trap. "Justice must be done, and there has been no leaders to take their places until the ten of you!".  When R' Nechunya ben HaKana heard of this decree, he told R' Yishmael Ben Elisha to asend to Heaven to ascertain whether this was the result of heavenly decree. R' Yishmael purified himself, uttered God's secret name, and ascended to Heaven. He asked the angel Gavriel about the decree, and Gavriel responded, "Accept it upon yourselves, righteous and beloved men, for I have heard behind the partition that this is to be your destiny," and R' Yishmael was told that the ten sages would be given to the evil angel Samael as a punishment for the selling of Yoseph. R' Yishmael reported to his colleagues what he had been told, and they accepted the heavenly decree.
R' Yishmael and Raban Shimon ben Gamliel were imprisoned together, and R' Shimon began to weep. R' Yishmael said to him, "Soon you will be among the saints in the next world. Why are you crying?" R' Shimon answered, "I am not crying because I am going to die, but because I am being executed like a Shabbat desecrator or an idol worshiper or ...a murderer." R' Yishmael suggested that maybe while he was eating or napping a women came to ask if she was considered a niddah and his attendants did not allow her to come in and disturb him...or a beggar may have knocked on the door while R' Shimon
was eating and his was not allowed in...R' Shimon asserted that he was extremely careful in these matters. R' Yishmael suggested that maybe he felt pride while he was teaching...and R' Shimon once again asserted that he was
careful not to have proud thoughts after he preached. (Some reverse the roles and say that R' Yishamel was crying and R' Shimon said these things to him).
When R' Shimon and R' Yishmael were taken out to be killed, R' Yishmael fell at the feet of the executioner and begged, "I am a Kohen Gadol, the son of Kohanim Gedolim; kill me first so that I will not see the death of my fellow." R' Shimon pleaded, "I am a Nassi, the son of a Nassi; kill me first so that I will not see the death of my fellow." The executioner cast lots, and the lot fell on R' Shimon to be killed first. The executioner immediately decapitated R' Shimon. R' Yishmael hugged the head to himself and placed his eyes against the eyes of R' Shimon and his mouth against R' Shimon's mouth. In a loud voice he cried out, "You holy lips; you never spoke anything but secrets of the Torah. How can you be made to lick the dust?"
The royal princess was drawn to the scene. When she saw the handsome R' Yishmael, she bid the executioner to wait for her, and she ran to her father and asked that he spare R' Yishmael. "What do you see in that Jew?" asked the emperor. "He has the most beautiful face I have ever seen," responded the princess. The emperor gave orders that R' Yishmael be skinned alive, and that the skin of his face be mounted and preserved. When, while they were skinning his face, they reached the place on his head where he used to wear his tefillin, he gave a loud scream and died.

There was a custom in Rome that every 70 years they would take a healthy man and ride him on a cripple, both of them wearing the garments of Adam. The healthy man would be masked with the skin of R' Yishmael and adorned with precious jewels. The two men would be led through the city and they would prepare say, "This is the story of our ancestors. The cripple is Yaakov, and the healthy is Esau. See how Esau is on top of Yaakov; this is a sign that Esau dominates Yaakov and the blessings that Yaakov got through trickery did not help." (Rabbi Ashei claims they actually said the opposite of what they meant to say). " People would come from far and wide to see the spectacle...(Tractate Avodah Zarah, p. 11, Rashi)
When Rabbi Akiva and Rabbi Yehudah ben Bava (or Betairah) heard about the deaths of Rabbi Shimon and R' Yishmael, they arose, put on a sackcloth, tore their garments in mourning, and said, "If there was any good in the world, it was
in the merit of R' Shimon & R' Yishmael. Great misfortunes will befall the world"
Their deaths had been previously prophesied by Shmuel HaKatan, who predicted before he died (before the Temple was destroyed), "Shimon and Yishmael will die by the sword, and their colleagues are destined to be murdered..."(Sota  48)


According to the Ari (R' Yitzchak Luria), Yosef himself caused the brothers to sell him, and all that happened to him as a result (Sha'ar HaGilgulim, hakdama 34). Between publicizing his dreams of rulership, and speaking lashon hara about his brothers, Yosef brought upon himself all of his misfortune. R' Yishmael was the reincarnation of Yosef HaTzaddik (Joseph). Just as Yosef had the beauty of Adam and was handsome, so was R' Yishmael. R' Yishmael's death was an atonement for the sin of Yosef himself!
This wasn't the only reason why he had to die so gruesome a death, but it was the main reason.


The Son and Daughter of R' Yishmael
His son and daughter were taken into captivity and sold as servants to different Roman masters. Their two masters once met each other, and they both boasted about the beauty of their servants. They decided to have the servant and the maidservant marry each other and their children would be divided between the two masters. They placed the servant and maidservant in a room at night. The servant sat in one corner and said to himself, "I am a cohen, the son of Cohanim Gedolim; I should marry a maidservant?" and the maidservant sat in another corner and said to herself, "I am a Kohent, the daughter of Kohanim Gedolim; I should marry a servant?" They each sat in their respective corners and cried the whole night long. When morning came, they recognized each other and fell on each other and cried until their souls left them (Gittin. 58a).

May the merit of the tzaddik Rabbi Yishmael Kohen Gadol protect us all, Amen.