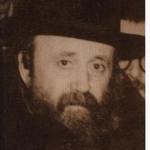 Rabbi Yaakov Yosef Twersky, Skverer Rebbe (1899-1968). In the summer of 1919, because of the pogroms in the Ukraine that followed the Bolshevik Revolution, the family moved to Kiev. A few months later, on 15 Kislev, his father, Rabbi David, the Skverer Rebbe, was niftar, and the following fall, the remaining family left for Kishinev, Bessarabia (Moldavia). In 1925, Rabbi Yaakov Yosef married and moved to Belz. A few years later, he returned to Romania and led the Skverer Chasidim in Kolorash as their Rebbe. In the winter of 1945, he moved to Bucharest, from where he moved to the United States (in 1948). After establishing his court in Boro Park, then Williamsburg, he founded New Square a town of Hasidim in 1957.

May the merit of the tzaddik Rabbi Yaakov Yosef Twersky  protect us all, Amen.