Rabbi Yaakov Tzvi was great in Torah and very learned in Hebrew, he did not want to become a Rabbi... 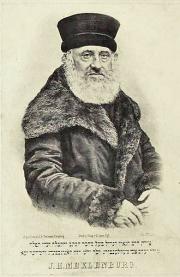 Rabbi Yaakov Tzvi was born in 5545 (1785) in Lissa, in the province of Posen, Germany. This city was renowned as a center of Torah scholarship, as well as for its great rabbanim.

We know little about the childhood of the young Yaakov Tzvi. There is one thing, however, that we do know, which is that he was extremely diligent and almost never stopped studying Torah.

Even though Rabbi Yaakov Tzvi was great in Torah and very learned in Hebrew, he did not want to become a Rabbi. He went into business and did quite well in it, yet even then he did not neglect his Torah study, which he practiced assiduously. As it turned out, the wheel of fortune changed and his business deteriorated. It was at that time that he was offered the rabbinical position in the city of Koenigsburg, at which point he realized that Heaven desired that he should become a Rav. Thus he accepted the position, which he assumed in 1831 at the age of 46.

Rabbi Yaakov Tzvi believed that he could find peace and quiet in the tent of Torah, but as it turned out he plunged himself into the fight against the Enlightenment movement and various currents of the Reform movement. All of a sudden he was thrown into a new world, one different from the one he had lived in all his life. In his hometown, Jews studied Torah and the spirit of tradition reigned supreme. However in Koenigsburg, strange winds had already begun to blow, and the Enlightenment movement desired to take the place of traditional Jewish life.

Far from enclosing himself in the tent of Torah, Rabbi Yaakov Tzvi placed himself in the first wave of those fighting the assimilationists and Reformers, calling upon people with fiery words to be vigilant and defend the holiness of Israel. He was very determined, and since all Jewish tradition was sacred in his eyes, he defended it with all his strength.

Rabbi Yaakov Tzvi would normally not attend a wedding unless he knew that the young couple would conduct themselves in accordance with Torah laws. One day, an important man who had become distant from Judaism invited the Rav to officiate at the marriage of his daughter. Knowing that the young couple did not observe Halachah, the Rav refused. However the man, who was very influential, went to the authorities and obtained an order that obliged the Rav to marry his daughter.

During those difficult times, Rabbi Yaakov Tzvi wrote a commentary on the Torah. True, there had been several Bible commentators in Germany before him, but their analyses had not been accepted by faithful, orthodox Jews, for the spirit of the Enlightenment movement hovered over them. That is what drove Rabbi Yaakov Tzvi to write his own commentary on the Torah, which he entitled Haketav Vehakabbalah. The goal of this work was to show how Scripture (Haketav) and the Oral Law (Vehakabbalah) formed a whole, and that both were given by one single shepherd, Moses our teacher. Rabbi Yaakov Tzvi’s explanations connected the direct meaning (pshat) to the hidden meaning (drash).

In his commentary, Rabbi Yaakov Tzvi followed the steps of the Vilna Gaon. One day, Rabbi Israel of Shklov, a disciple of the Gra, was asked wherein lay his teacher’s power. In response, he took a Bible out of the library and said, “This is the power of my teacher and Rav the Gra. He was in full possession of this book to a degree that is unimaginable, knowing its every letter.” Rabbi Israel continued and said, “My teacher the Gra believed that ‘There is nothing which is not alluded to in the Torah,’ and he knew how to discover and show how all the Oral Law was hidden within the written Torah.”

Rabbi Yaakov Tzvi Mecklenburg walked in the paths of the Gra, and he strived with all his might to meld the written text with oral tradition. His commentary is a tremendous work in which we can see his eminence in Torah. It also demonstrates his tremendous scholarship, knowledge of the Hebrew language, and his sharp, clear, and irrefutable logic.

Haketav Vehakabbalah was well received throughout the Diaspora, and that alone makes it worth transcribing the following letter. It is an excerpt from a reply that Rabbi Yaakov Tzvi gave to the Gaon and Tzaddik Rabbi Eliyahu Guttmacher, the Rav of Greiditz. In it he states: “The Rav’s great desire to see my work on the Torah is in my opinion inappropriate, for it is not intended for a Gaon such as himself, but for people of lesser stature, for it seeks to repair the breach of ungodliness that has the audacity to ascribe falsehood to our teachers, the Sages of the Oral Law. I thank G-d that this explanation [given by my commentary] pleased our brothers in Poland and Russia. I have heard that in certain communities, instructors now teach it to young boys, and that in certain places a person has been placed in the Beit Midrash to explain the parsha of the week with this commentary every Shabbat. May the study of Torah return to all its initial glory! However for the Gaon, this commentary is useless” (Sinai, vol. 65, bk. 5-6).

This letter shows the modesty of the author of Haketav Vehakabbalah, a man who believed that he was writing not for the great of his generation, but for “people of lesser stature.” He was a man who rejoiced in the fact that teachers in Poland and Russia were using his book. This letter also shows that groups were being formed each Shabbat to study the parsha of the week alongside his commentary. It is therefore not surprising that over the years, there have been five editions of the abridged version published.

Other than Haketav Vehakabbalah, Rabbi Yaakov Tzvi Mecklenburg wrote a commentary on the Siddur called Iyun Tefillah. This book was printed with his commentary Derech HaChaim, which also enjoyed great success and was republished four times.

Before his death, he ordered that no eulogies be given at his funeral. In his will, he expressed his desire that his commentary be read in public three times a week, after the Torah reading, during the first 30 days of mourning that followed his funeral.

May the merit of the tzadik Rabbi Yaakov Tzvi Mecklenburg protect us al. Amen