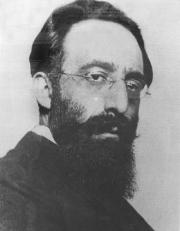 Dr. Nathan Birnbaum, 1864-1937. A leader in the early Zionist movement, he is credited for coining the word “Zionism” in 1890. He played a prominent part in the First Zionist Congress (1897) and was elected Secretary General of the Zionist Organization. However, ideological differences with Theodore Herzl led to his leaving the movement. In the years preceding World War I he gradually abandoned his materialistic and secular outlook, eventually embracing full traditional Judaism. He may be seen as the forerunner of the modern Baal Teshuvah movement. His most famous book of this period was Gottesvolk (“G-d’s People”) first published in German and Yiddish in 1917 (translated into English in a shortened form by J. Elias in 1947 titled "Confession"). In 1919, he became the first Secretary General of the new Agudath Yisrael Organization. He lived in Berlin 1921-1933. After the rise of Nazism, he left Germany for Scheveningen, Netherlands, until his death.

May the merit of the tzaddik  Rabbi Dr. Nathan Birnbaum protect us all, Amen.