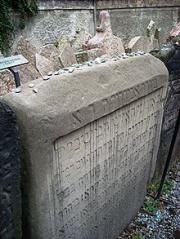 Rabbi Avigdor Kara was the son of the rabbi Izhak Kara. His father and he moved from Regensburg to Prague, where Avigdor probably had to witness the murder of his father on the occasion of a pogrom in 1389 as a child. He was said to have been consulted by King Wenceslas IV on religious disputes. He later became a member of the Prague Rabbinical Court (Beth Din). Avigdor Kara was buried in the Old Jewish cemetery in Prague, his gravestone being the oldest preserved in this cemetery. Because of the poor state of preservation, the stone was taken to the Jewish Museum in the Maisel synagogue, while a copy was placed in the cemetery. The inscription says that Kara had an understanding of the lovely song, and many, and even some, had taught the knowledge of the Torah in science, in all books of wisdom, and the books of Scripture.

Rabbi Avigdor Kara was a Kabbalist. He has preserved some fragments of manuscripts, including the Kabbalistic responses Ewen sapir, the allegorical expositions of the Pentateuch, and the Kabbalistic script Kodesh hillulim. The most famous of these, however, are his poems, such as the Elegy Selicha, which is the subject of the pogrom of the year 1389, and which is still read to Yom Kippur in the New Synagogue. It states:
"Many have been slain, who knows your numbers, young men and girls, old and infants. We, Lord of all souls, I must not remind them, you will all judge, you will all shine." They also destroyed the cemetery Of the eternal freedom, where the bones of my great ancestors rest. They dug these my treasures, they smashed the tombs with rage, to humiliate my pride. Is not it enough yet ?! "
The form of Avigdor Kara was poetically processed by the Czech writer Alois Jirásek in his trilogy Mezi proudy (Between the Streams).

May the merit of the tzadik Rabbi Avigdor Kara protect us all. Amen