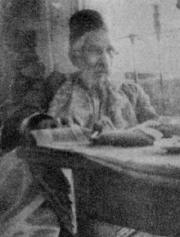 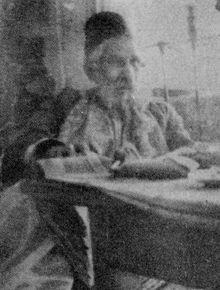 Solomon Eliezer Alfandari (Hebrew: שלמה אליעזר אלפנדרי‎‎) (c. 1826 – 1930), also known as the Saba Kadisha ("Holy Grandfather"), was a distinguished rabbi, kabbalist and rosh yeshiva in his native home of Constantinople, and later served as Chief Rabbi of Damascus, Syria Vilayet, and Safed, Beirut Vilayet. He was known for his stringent interpretation of halakha and his uncompromising dedication to Orthodox Judaism.

The Saba Kadisha was born in Ottoman-controlled Constantinople around 1826 (some say as early as 1820 to a distinguished family of Torah scholars. His father, Yaakov, was a Talmudic scholar; his grandfather, Rabbi Ḥayyim ben Yaakov Alfandari, authored Maggid MiReishit, and his great-grandfather, Rabbi Yaakov ben Ḥayyim Alfandari, authored Mutzal MiEish. His mother, Chana, also came from an illustrious family.

As a youth, Solomon Eliezer was noted for his sharp understanding of Torah subjects. Yet he refused to accept a rabbinical position or to wear the customary dress of the city's sages. He did agree to join the Vaad Haruchani (Spiritual Council) of Constantinople, and accepted the position of rosh yeshiva in a yeshiva which the city's Jews founded for him. In the latter post, he taught many outstanding scholars, including Rabbi Chaim Hezekiah Medini, later known as the Sdei Chemed.

Rabbi Solomon Eliezer displayed his willingness to take a firm stand in a highly charged political situation which found him challenging the views of his entire community.

The issue at hand was the drafting of Jewish soldiers into the sultan's army, a decree fraught with spiritual peril. Originally, the Jews who had fled the Spanish Inquisition to the Ottoman Empire were exempted from the army by the sultan. In Rabbi Solomon Eliezer's day, however, a new sultan, Abdul Hamid II, decreed that all non-Muslims must enlist.

The city's rabbis tried to reverse the edict, without success. Eventually they decided to accept the decree rather than provoke the authorities. The Vaad Haruchani issued a directive urging the region's Jews to go ahead and enlist.

Rabbi Solomon Eliezer was the only one who protested this course of action. At the Vaad meeting, he declared, "Since serving in the Turkish army involves Shabbat desecration and the defiling of oneself with nonkosher food, enlisting in the army is considered a Chillul Hashem. We must not yield to Sultan Abdul Hamid. If we are firm, Hashem will help us." After this declaration, he burst into tears.

One of the community's wealthy members had some influence in the sultan's court. Yet this Jew, too, backed the draft decree. One day, as this man visited the palace to oversee certain aspects of the decree, he fell unconscious and died.

The next day, a huge gathering assembled at the wealthy man's funeral. At that time, it was customary for Rabbi Solomon Eliezer to deliver the first eulogy at every funeral, and no one dared precede him. But today, Rabbi Solomon Eliezer stayed home. Community representatives came to plead with him to speak, or at least to let others speak without him, but he refused. The sons of the wealthy man came to offer him a large sum of money which he could use for tzedaka, but still he refused. "Yesterday I visited your father and asked him not to collaborate with the sultan," the rabbi explained. "But he defied me. Therefore, I cannot honor him."

In the end, none of the city's rabbis eulogized the man.

Sultan Abdul Hamid was furious when he heard about Rabbi Solomon Eliezer's efforts to cancel the draft decree. He summoned the rabbi to the palace, intending to punish him for inciting the Jews against him. But when the sultan met the rabbi and heard his position, he was very impressed with him. He even granted him the title of Hakham Bashi, with the power to issue edicts in the Jewish community.

In the end, the draft was not enforced due to internal conflicts in the royal court.

In 1897, the Saba Kadisha decided to leave Constantinople to accept the position of Chief Rabbi of Damascus. Here he founded a yeshiva which produced dozens of students who served as rabbis and dayanim in Sephardic communities in the region.

In 1904, at almost 90 years of age, he immigrated to Palestine. At first he lived for several years in the city of Haifa, but then accepted the invitation of the Torah leaders of Safed to serve as their Chief Rabbi, a position he held until 1918.

The story is told that when Rabbi Solomon Eliezer went outside to bless the new moon with his congregants at the beginning of the month of Nisan 5674 (April 1914), he looked up after completing the blessings, clapped his hands and cried loudly. He explained, "I see that a large-scale war will soon break out." Four months later, World War I began.

Rabbi Solomon Eliezer was able to relieve the water and food shortages faced by the Jews of Safed during World War I as a result of another encounter with a Turkish official. This time, a Turkish pasha came to the city riding a white horse and dressed in a flashy uniform, with a retinue of Turkish soldiers. When the Saba Kadisha came out to greet him, the pasha was impressed by the rabbi's distinguished appearance, and asked him for a blessing.

"Only the humble can receive blessings," the rabbi replied. "I will bless you after you come down from your horse."

The pasha complied, and the rabbi blessed him: "May God help you in your efforts to see to the needs of the oppressed Jewish nation." As a result of that encounter, the pasha did arrange for food and water to be supplied to Safed's Jewish residents."

In 1918, rabbi Yisroel Ber Odesser, a Breslover Hasid, became a personal attendant to rabbi Solomon Eliezer, who was living in Tiberias at the time. After seeing Odesser recite Tikkun Chatzot one night, however, the Saba Kadisha refused to let him attend him anymore, and instead treated him as a young colleague.

The Jerusalem street on which Alfandari lived has been named after him.

In his final years, Alfandari suffered many ailments, for which he sought medical treatment in Jerusalem. Although he tried to travel incognito, many Torah leaders desired to meet him when they found out he was in their city. One of these gedolim was Rabbi Ezra Attiya, who later became rosh yeshiva of Porat Yosef Yeshiva. The Saba Kadisha held Rabbi Attiya in high esteem, and would always stand up for him when he visited.

In 1925, Alfandari developed a serious illness while in Tiberias. He refused to be treated in the local hospital, where the rules of tzniut (modesty) were not meticulously observed, and was taken to Shaarei Tzedek Hospital in Jerusalem instead. After he recovered, Jerusalem's sages begged him to stay in their city. He rented an apartment in the Ruchama neighborhood (today Mekor Baruch).

Here he hosted meetings with many prominent Torah scholars who came to consult with him and speak with him in learning. These included: Rabbi Tzvi Pesach Frank, Chief Rabbi of Jerusalem; Rabbi Velvel Mintzberg, leader of the Ashkenazi community in the Old Yishuv; Rabbi Avraham Weinberg of Slonim, author of Birkas Avraham; and Rabbi Yitzchak Abuchatzeira, brother of the Baba Sali and a Torah sage in his own right. Shortly before the Saba Kadisha's death, the Munkatcher Rebbe, Rabbi Chaim Elazar Spira, of Hungary made a special trip to meet him. Theirs was considered an historic meeting between two worlds, the Sephardi genius of the Middle East and the Hasidic tradition of Eastern Europe.

Alfandari contracted pneumonia in May 1930 and was treated by Dr. Moshe Wallach of Shaarei Tzedek Hospital. His disease worsened, however, and he died on 20 May 1930 (22 Iyar 5690). His funeral was attended by thousands, as his students carried his casket on foot from his home all the way to the Mount of Olives. He was nearly 110 years old.

The street on which Alfandari lived in Jerusalem was named in his memory.

He forbade the shaving of beards, even using scissors or depilatory cream. He even refused to speak with a talmid chacham who did not have a beard, even if the discussion concerned the Talmud.

During his move from Syria to Palestine, the Saba Kadisha stopped off in Beirut, where many questions were addressed to him regarding shmita (the laws of the Sabbatical year). His responses indicate that he strongly opposed the heter mechira which Israel's Chief Rabbinate had adopted to spare its farmers from loss. Rabbi Solomon Eliezer was a strong opponent of the Zionist Nationalist Council (Vaad Haleumi), which, in British Mandate Palestine, automatically enlisted all Jews, unless they opted out. Rav Alfandari signed legal rulings obligating every Jew to opt out.

All of rabbi Solomon Eliezer's responsa and halakhic rulings were published posthumously. These include:

His letters were collected in Masos Yerushalayim, Kumi Roni and Amudei Arazim.

May the merit of the Tzadik Rabbi Solomon Eliezer Alfandari protect us all. Amen