Head of Yeshiva, Kabbalist, Mohel, Gaon in exile and in the occult, a man of kindness and trust 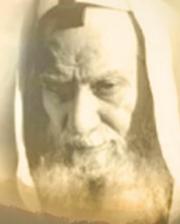 Rabbi Shmuel Druzi Born in 1922. Head of Yeshiva, Kabbalist, Mohel, Gaon in exile and in the occult, a man of kindness and trust. Pure piety. From the pillars of global fire with understanding and knowledge of all the mysteries of Kabbalah. He worked his Creator with devotion. Grew in prayer over the redemption of the Divine Presence and the redemption of Israel. He brought many hearts closer to their Father in heaven. He secretly rewards favors and married many orphans. A true man. He was asked to sit on the Sabbath on the Sabbath, "Vayeshav", in the era of Rua Darwin in the reading of the Torah. 23 Kislev 2006. He lived in Kiryat Shaul for about 84 years.

Even when he was a child, he wrestled with the dust of the sages. At the beginning of his career, he dealt in the wholesale market in Iraq, and from there he progressed as an accountant to the finance minister in the Iraqi government. Due to the events that took place in Baghdad, his parents established a yeshiva and a synagogue in their home, and from there they distributed Torah. In 1950, at the age of 28, he immigrated to Israel through Persia, despite pressures and tempting proposals to stay in Iraq. In 1953 he married Latifah Yaffe, they had five sons and two daughters, and in the year 5751, every young man, Rabbi Yeshurun, died at the age of 29 years (five months after his marriage).

From the dawn of his youth, he was diligent in the Torah. When the kabbalist Rabbi Yehuda Patya zt "l came, the Rebbe was sitting on the window sill and listening, and at a young age he served as a householder for the rabbis of Babylon, among them the sage Rabbi Nissim Kaduri. At the age of 15 he joined the study of the Gaon Rabbi Yosef Rabia and Chacham Sasson Mizrachi, through which he entered the wisdom of Kabbalah. He studied for seven years every Shabbat with the son of Chacham Efraim HaCohen zt "l, learned with Rabbi Chayim Sufyan on the night of Monday and Friday at the Twig Synagogue and studied with Rabbi Yaakov Mutzafi in the" Shemesh Tzedaka "synagogue. He also studied Chavruta with R. Yehuda Tzedakah for many years. For 21 years, he studied with Rabbi Yitzchak Kadouri at Yeshivat Dor Yesharim (in their lives and in their death, they did not separate, Rabbi Dersi commanded Rabbi Kadouri's zt "l). Later, Rabbeinu established the" Nayot Baramah " As Rosh Yeshiva until his last day. There is no doubt that if he was alive, he would follow the path of the old Kabbalist, Rabbi Yitzchak Kadouri.

In his youth, he studied in the "Bnai Tzion" seminary in Baghdad, in a building that was assigned to the yeshiva by the kabbalist, the gaon, and the sage Rabbi Salman Mutzafi. In the Beit Midrash they met each other. When Rabbi Salman Mutzafi was appointed head of the Yeshiva, Rabbi Shmuel Darazi began to give shiurim at the yeshiva. In those years, the two reported a regular lesson that took place until the morning, in the presence of about 100 students. The lesson would begin with the saying of Tikkun Chatzot for an hour and a half. The attendees later testified that every night they felt that at night the Temple was destroyed.

His son, Chacham Yitzchak Derzi, said that whenever his father woke up at night, at any time, even in a way that only a few minutes earlier he had fallen asleep, he immediately rose quickly and diligently to serve God, saying: "A person wakes up at night, But a sign from the heavens that God is waiting for his Torah and his prayer, and it is possible that at that moment he saved the whole world and made him a worthy ruler. The rabbi was the first to publish a series of arrangements with the intention of the Rashash.

Once when the rabbi was in the middle of the prayer service, a man who was mentally unstable entered the synagogue and began beating him severely. The rabbi did not notice that at all because he was completely immersed in prayer. After the prayer, he asked innocently: "What was the noise here?" And he did not ask about the beatings, because he did not feel that he had been hit.

The rabbi went regularly to the Western Wall every day, for 40 years he was first seen in the sun, summer and winter. And even during the snow when it was necessary to make supreme efforts to arrive. One day, when he returned from prayers at the Wailing Wall, as usual, he ordered his driver to stop and immediately pointed at the next taxi opposite them, saying with determination and determination: "Know that there are terrorists in this taxi who are going to carry out a terror attack in Jerusalem." His disciples, knowing that the Holy Spirit was speaking from the rabbi's throat, immediately called the police, and reported that the taxi had terrorists. And that it would be caught with explosives and prevented a large attack.

It was a fact that they approached his acquaintances from Holon and consulted him about buying a plot for a "synagogue". The rabbi came to them from Jerusalem himself, and inquired about a comfortable place for them. Now, they found a man who did not observe Torah and mitzvot who had a suitable plot. The rabbi asked him to sell the lot at a convenient price for the higher goal. A Jew answered him and said, "I am willing to lower the price, provided that the rabbi blesses me with a male son, since I am an adult and I have not received a son." The rabbi replied: "In order for the blessing to apply, you must observe the Sabbath" because it is the source of the blessing, "which is the first condition:" I agree, but in two weeks I will begin to observe Shabbat. " But from now on he immediately stopped desecrating the Sabbath and earned a male son. "A Jew accepted the rabbi's request and immediately began observing the Sabbath, and indeed he was given a single son, according to the rabbi.

The rabbi knew the day of his death, two days before his death, in the shiur he taught, spoke of man's nihilism in the world, and no one knows the day of his death. The righteous Rebbetzin says that shortly before his passing, the sage said to her, "Do you see, it's midnight, it's midnight!" He did not understand what he meant. However, on Motzaei Shabbat Kodesh, when they hastened to meet him before midnight (as is known, according to some Kabbalists on this Saturday night), she apparently understood what he meant.

Rabbi Meir Mazuz shlita, in his eulogy for Rabbi Derzi after the thirties, said that Rabbi Etton Shabtai came in a dream to the righteous person of our generation and revealed to him the secret of the verse in Tehillim Psalm 45: The gemara in Ta'anit 9a on page 1 demands the verse: "And I will exterminate the three shepherds in one moon." Recently, too, the three shepherds walked, and their mark was "oppressed"

Rabbi Rabbi Darzi Shmuel zt "l, Rabbi Kaduri Yitzchak zt" l and Rabbi Eton Shabtai zt "l. And they even died in this order. The rabbi told the tzadik in a dream that this means that now is the time of repentance of the people of Israel.

May the merit of the tzadik Rabbi Shmuel Druzi protect us all.Amen