Rachel Imenu’s day of passing is the 11th of Cheshvan, which has been established as Jewish Mother’s Day 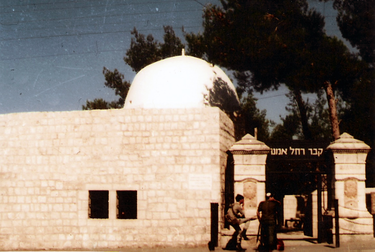 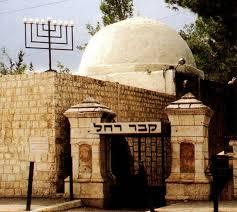 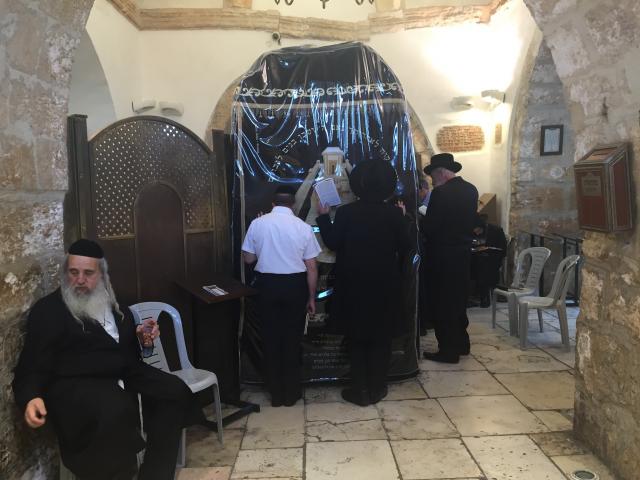 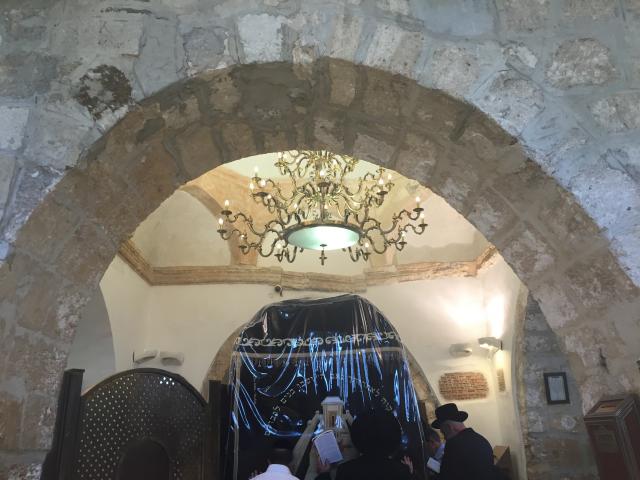 Rachel was one of the wives of Yaacov (Jacob) Avinu, sister of Leah Imeinu.

Rachel was the mother of Yosef HaTzaddik and Binaymin HaTzaddik. She died in Israel while giving birth to Binyamin.

Rachel was one of the first prophetesses (Yerushalmi Berachos 9:3).

Rachel was known for her beauty (Bereishis Rabbah 70:16).

In reward for her modesty in giving Leah her signal and not revealing to anyone that she had done so (Rashi), she merited that King Shaul descend from her (Megillah 13b).

Why did Rachel die first? Because of the curse of the Yaacov who said, "With whomever you find your gods (teraphim stolen that belonged to her father Lavan), shall not live" (Gen. 31:22).
Because she spoke before her older sister, as it is written, Rachel replied and then Leah (Gen. 31:14) (Bereishit Rabbah 74:4).    Because Yaacov had delayed in fulfilling the vow he had made before God (in Gen. 28:20-22), the power of Yaacov's accuser was strengthened. Therefore, Rachel went into labor and had difficulty in her childbirth (ibid. 35:16) (Zohar 1:175a).

Rachel died and was buried (Genesis 35:19). The burial took place immediately after death out of respect for her (Bereishit Rabbah 82:9).

Rachel said, "Therefore, he shall be with you tonight" (Gen. 30:15). Because she had made light of being together with the righteous Yaacov, she was not buried with him (Bereishit Rabbah 72:3).

As a girl, Leah would go out every day to the crossroads and weep and pray that she should merit to marry Yaakov, whom she had heard was righteous (and not Esav who was evil), whereas Rachel never went out on the road. Therefore, Leah merited to be buried with Yaacov, whereas Rachel's tomb stands at the crossroads (Zohar 1:223a).

Yaacov set up a monument over her grave (Gen. 35:20). Each of the sons placed a stone on Rachel's grave, so that twelve stones were piled one atop the other, and Yaacov's stone was set on top of them all (Lekach Tov, Bereishit 35:20).

The place of her burial will not disappear until the day the Holy One, Blessed is He, resurrects the dead (Zohar 1:175a).

Foreseeing that the exiles would pass by the site, the Patriarch Yaacov buried her on the road on the way to Ephrath and not within the city so that she would sense their anguish and pray for them (Bereishit Rabbah 82:10).

She was buried in Beit Lechem, where her grave site has been visited by many Jews for the last thousands of years.

May the merit of the tzaddeket Rachel Imeinu  protect us all, Amen.

Rachel is the spiritual matriarch of the Jewish People who are scattered throughout the world. Rachel personifies the cry for the spiritual and physical return of all Jews. Rachel is she who refuses to be comforted until the ingathering of her children is realized (see Jeremiah 31:14).

Following is a deeper understanding of the symbolism connected with Rachel Imenu, Rachel our matriarch.

For the Jewish People, our matriarch Rachel, Jacob’s beloved wife, personifies the innate power of the soul and its conscious devotion to arouse God’s mercy to redeem His children from exile and bring them to the promised land. This she does with tears and heartfelt prayer.

In the words of the prophet Jeremiah:

So says God: “A voice is heard in Ramah, lamentation and bitter weeping; Rachel weeps for her children, she refuses to be comforted, for her children, who is not.” So says God: “Keep your voice from weeping, and your eyes from tears; for there is reward for your effort, says God; and they shall return from the land of the enemy. And there is hope for your future, says God, and the children shall return to their border.”

We recite this prophecy as the Haftorah of the second day of Rosh HaShanah.

Rosh HaShanah, the “day of remembrance,” is the day that Rachel, after having been barren for many years, was remembered by God to bear a son. Thirty years afterwards, on the very day of Rosh HaShanah, her son, Joseph, was released from prison and appointed viceroy of Egypt.

The phrase “for her children, who is not,” over whom Rachel cries in the above prophecy, refers to Joseph in particular, the spiritual representative of the exiled tribes of Israel.

The numerical value of Rosh HaShanah (רֹאשׁ הַשָׁנָה) is 861 and is the trinagle of 41, the sum of all the integers from 1 to 41. 41 is the gematria of “mother” (אֵם). 861 is also the value of “the Holy Temple” (בֵּית הַמִקְדָשׁ), for the woman, the mother, symbolizes the home and builds for her family a holy sanctuary.

Before the blowing of the shofar on Rosh HaShanah, we meditate upon God’s 22-letter Name, whose numerical value is 1681, the square of 41. This is the Name that is encoded in the priestly blessing, the source of all blessing for a good and sweet year.

The full forty-one day period from Rosh HaShanah to the 11th of Cheshvan can thus be understood to be a continuation and extension of the spiritual service of Rosh HaShanah (which equals from 1 to 41, as stated above). The yahrzeit of Rachel consummates the birth (from the womb of mother) of the year. (On this very day she gave birth to her second son, Benjamin, and gave back her life to her Creator in childbirth.)

Our sages teach us that “the gates of tears are never locked.” In the midnight prayer, referred to as tikun Rachel (“the rectification of Rachel”), we meditate that the name “Rachel” (רָחֵל) equals 238 = 2 ∙ 119; 119 is the numerical value of the word “tear” (דִמְעָה), in Hebrew. Thus, our mother Rachel personifies the two cosmic tears of the Shechinah (God’s imminence and revealed presence in our world), that flow from her eyes and arouse mercy over the people of Israel. These two tears correspond to the two days of Rosh HaShanah (Rachel’s Haftorah is read on the second day of Rosh HaShanah, when both tears have been shed).

The word “tear,” 119, in turn equals the word for “little” or “small” (מְעַט). God promises the Jewish People that He will banish our enemies from our land, that we may inherit and settle it, “little by little” (מְעַט מְעַט). Though the Torah explicitly states that this means “not in one year…,” the process can surely be sped up, dependent upon our merit. The process that lead to the redemption of Joseph, the son of Rachel, took not one year but two. Each of these two years can be seen to correspond to one of his mother Rachel’s tears.

Furthermore, the phrase “little by little” itself alludes to the spiritual service which aids to hasten our redemption and the inheriting of our land. To the extent that the Jewish soul (as a people, the children of Rachel) recognizes its existential smallness, its selflessness in facing God and receiving His blessing, so will God speedily answer our prayers and reunite us with our homeland, to fulfill our destiny and His purpose in creation. And so do we find that God loves us and chooses us for “you are the smallest [me’at] of all the nations,” which the sages interpret as: “you consider yourselves small.”

Furthermore, the phrase “little by little” itself alludes to the spiritual service which aids to hasten our redemption and the inheriting of our land. To the extent that the Jewish soul (as a people, the children of Rachel) recognizes its existential “smallness,” its selflessness in facing God and receiving His blessing, so will God speedily answer our prayers and reunite us with our homeland, to fulfill our destiny and His purpose in creation. And so do we find that God loves us and chooses us for “you are the smallest [me’at] of all the nations,” which the sages interpret as: “you consider yourselves small.”

We are also taught in Chassidut (Tanya, end of Igeret HaKodesh 21) that through repeated acts of charity the Shechinah (personified by Rachel) “shakes off the dust of exile little by little,” and rises to her full spiritual stature. The Hebrew verb “to shake off” (לְהִתְנַעֵר) also means “to become rejuvenated” (the root, נער means “a youth” and the reflexive grammatical form of this verb means “to become young again”). By shedding two tears and experiencing existential smallness, one rejuvenates his personal life and that of his people.

From the Zohar we learn a deep secret about appearances: “He who is small is [indeed] great.” The smaller we are in our own eyes, the greater we appear in the eyes of God (and in fact, in the eyes of all other nations).

Each tear of our mother Rachel nurtures in our, her children’s, consciousness the sense of “smallness.” She “nurses” us with her tears.

Not only does she nurture our consciousness with her tears, but she washes us—cleansing us from all our spiritual blemishes—with her tears:

The Hebrew word for “mother” (אֵם) is spelled identically to the word for the conditional “if” (אִם). The prophet Isaiah says: “If (אִם) God has washed the filth of the daughters of Zion…,” implying that it is the mother-principle (personified by our matriarch Rachel, who in particular is referred to in Kabbalah as the lower mother, the sefirah of kingdom, whose Divine Name is Adni, the Name of God that appears in this verse) that washes clean the filth of the daughters of Zion, the souls of her children.

We may now picture one of Rachel’s two tears as nurturing our consciousness from within, and the second of her tears as washing our souls from without. Each tear corresponds to a state of smallness, the first to the state of my innate existential smallness in the face of the infinite Almighty, and the second in recognition of my distance from Him (the further removed, the smaller) due to my own iniquities.

When this full, rectified state of consciousness and recognition is integrated into our souls, the letters of the word “small” (מְעַט) inverts to spell the word for “taste” (טָעַם), referring specifically to the goodly taste of the secrets of the Torah, which will be revealed by Mashiach, may he come and redeem us speedily in our days. Amen.

May the merit of  Rachel Imenu protect us all. Amen