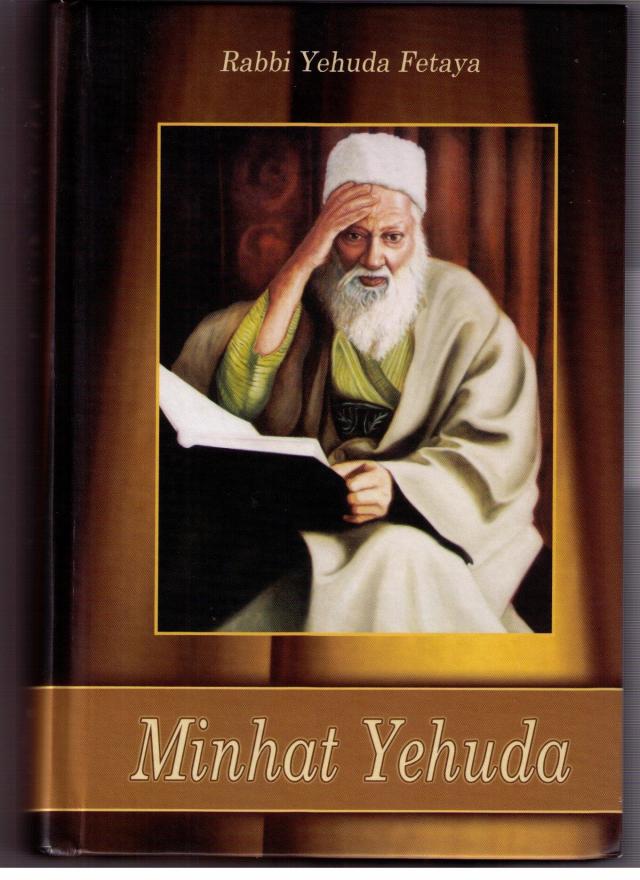 Rabbi Petaya rose to be the foremost student of the Ben Ish Chai. He had said regarding himself that he was the reincarnation of Rabbi Yehuda Landau, a great Ashkenazi halachist, author of the Responsa, "Noda B'Yehuda". Rabbi Fatiyah said that he had to come back to the earth for although in his last lifetime, he was a tzaddik and pios man, he did not fulfill his Torah obligation to study Kabbalah. So in this life, the study of Kabbalah was his main focus and tikkun (rectification).

Among his many works, which include multiple commentaries to the holy Zohar and Etz Chaim, Rabbi Yehuda authored "Minchat Yehuda". In it he writes of his experiences with earth bound souls, and the exorcisms that he performed. Even among Kabbalists this is not the norm. Rabbi Fetaya was a step above the rest. Rabbi Fatiyah was a master at detecting the presence of spirits and demons and an expert in the art of exorcism. However, he also knew that people many times make up or imagine things to be that are just not true. He never simply accepted someone's word that they were in contact with a spirit or demon. In order to ascertain their credibility, Rabbi Yehuda would test them to see if the person really was having an other-worldly experience or not.

Minchat Yehuda by Rabbi Fatiyah is one of the most revelatory works about demons, how they act and deceive people in the most malicious ways. Rabbi Fatiyah enumerates a number of personal experiences which he witnessed how demons appeared to people in dreams and while awake in all kinds of forms with the intent of deceiving them for some unknown devious purpose. Rabbi Fatiyah was an expert in exposing these demons and casting them out. He has recorded the procedures for doing these things in his work.

Rabbi Yehudah Fatiyah explains in detail how to distinguish between dreams that come from angels and those which come from demons. He gives a warning that demons are not stupid and know very well how to seduce mankind as they sleep. These unclean entities have learned the art of replication and can show an individual in their dreams false Heavenly and sublime spiritual symbols. The person will believe that he is receiving a holy Heavenly message, whereas in fact the soul is being deceived into becoming an agent of evil. Just as there are unscrupulous people in this world seeking to dupe and deceive others for their own personal gain, so are their spiritual beings that wish to do the same. The dream world is the realm of the unconscious; as such, it is the rightful domain of spirits both good and evil. Therefore, each of us when we dream must be very cautious. We must learn how to control our dreams. A dream interpreter must also be aware that not all message dreams come from holy sources.

"When a man's soul ascend above as he sleeps, if he is sinful then his soul is cast about from place to place by the forces of the powers of evil, this is why one sees himself in a dream in another country or in another land." (Zohar III, p. 222b).

Rabbi Fatiyah brings down examples how demons appear in dreams in the form of tzaddikim or as "ascended masters." They can show dreamers images of the heavens, the holy throne, or even Kabbalistic symbolism. All this is their attempt to convince the dreamer to believe in that which they send to him. In this way, the forces of evil ensnare for themselves another soul. The demons always begin by showing one images of holiness to convince the person that what he is seeing in his dreams is "kosher". Then after the soul is convinced and believes in what it is being shown, the demons then lead him step by step until eventually the person sinks into mental illness. In this state, the demons can control the person's mind and body. The only way to avoid the onset of such a demonic attack is the recitation of the full order of the nighttime Shema Yisrael prayers.

Rabbi Fatiyah explains the difference between angelic dreams and demonic dreams as follows. An angelic dream is a message dream. Therefore, during the dream the dreamer will remain calm and reposed, almost unemotional, regardless of what is seen. The dreamer will watch the dream vision like watching a movie, while the image's inner meanings will somehow be imprinted in his mind. Upon awakening, the dreamer is not frightened or alarmed. Although he is perplexed about what to do next, the next step always seems to become manifest. Such was the case with Pharaoh. After he awoke from his dream, he knew he needed it interpreted. Intuitively he felt inside himself that the interpretations his wise men were giving him were all wrong. He knew something was missing. Only then does his cupbearer speak to Pharaoh about Yosef. Pharaoh had never heard of Yosef to that day. Yet, that day forever changed the lives of both men, and both nations. G-d gave Pharaoh his dreams. G-d inflicted Pharaoh's wise men with stupidity. G-d brought Yosef into Egypt, made him a dream master and brought him before Pharaoh, all in accordance to the Divine plan.
A demonic dream takes on a different form. During a demonic dream, one feels great agitation. One may feel a weight on one's chest as if someone is sitting on you. The dream images are confusing and blurry. No clear mental message is received. One awakens with feelings of anxiety and panic. One feels an inner conviction towards a certain course of action, yet no logical or permissible means avail themselves. The person then is led to believe that his family, friends or community is holding back from him some form of "unmanifest destiny." The forces of evil then return in dreams to confuse the person even further, making him suspicious of others around him. Eventually paranoia sets in and is soon followed by schizophrenia. All this occurred because the person opened himself to foreign outside influences without first being on a proper level of kedusha (holiness) to defend himself.         (Minchat Yehuda)

May the merit of the tzaddik  Rabbi Yehuda Fatiyah  protect us all, Amen.