Yitzchok Friedman  was the founder and first Rebbe of the Boyan Hasidic dynasty. He was known as the Pachad Yitzchok (Dread of Isaac). 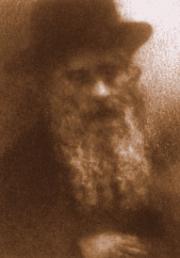 The Pachad Yitzchok was the eldest son of Rabbi Avrohom Yaakov Friedman (1820–1883), the first Sadigura Rebbe, and his wife Miriam. He was the grandson of Rabbi Yisroel of Ruzhin (1797–1851), founder of the Ruzhiner dynasty.

At the age of 15 he married Malka Twersky, daughter of Rabbi Yochanan Twersky, the Rachmastrivka Rebbe. They had four sons and one daughter.

Upon the death of his father in 1883, Rabbi Yitzchok and his younger brother, Rabbi Yisrael (1852–1907), assumed joint leadership of their father's Hasidim. Although they were content with this arrangement, many of the Sadigura Hasidim preferred to have one Rebbe, and in 1887, the brothers agreed to draw lots to determine who would stay in Sadigura and who would move out. The lots fell to Rabbi Yisrael to remain as the second Sadigerer Rebbe, while Rabbi Yitzchak moved to the neighboring town of Boiany (Boyan) and established his court there, becoming the first Boyaner Rebbe.

Under the leadership of the Pachad Yitzchok, Boyaner Hasidism flourished. The town of Boiany became a Hasidic center with a synagogue and four prayer houses. Boyaner communities were established in neighboring towns and in Jerusalem, Tiberias, and Safed. The Rebbe encouraged one of his wealthy Hasidim, Dov Ber Horenstein, who was childless, to build houses in Jerusalem as a memorial for himself; thus, the neighborhood of Batei Horenstein was founded near what is now Geula.

The Boyaner Rebbe was known for his piety and humility. However, he presented a regal face to the public and lived in a palatial home. This dichotomy was emblematic of the Ruzhiner tradition founded by his grandfather, Rabbi Yisroel of Ruzhin. The Rebbe was revered by his Hasidim, and formed close relationships with them.He was also known for his Torah knowledge and his love for the Land of Israel. He inherited the title of nasi (president) of Kolel Vohlin in the Land of Israel from his father, with responsibility for coordinating all funds sent for the welfare of the Orthodox community living there.

At the beginning of World War I, the Russian army occupied Boiany and the Jewish neighborhood was completely destroyed. The Boyaner Rebbe and his family fled to Vienna. In 1916 the Rebbe became deathly ill, but recovered and continued to lead his flock. On 11 March 1917 (17 Adar 5677), he suddenly took ill again, called for his wife and children to part from each of them individually, and then began singing a nigun of deveikut (attachment to God). While he was singing, his soul left him. He was buried in the Vienna Jewish cemetery in a special ohel. His eldest son, Rabbi Menachem Nachum (1869–1936), was buried in the same ohel after his death.

May the merit of the tzadik Rabbi Yitzchok Friedman protect us all. Amen