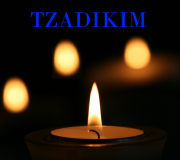 Rabbi Baruch Hager, the Seret-Viznitz Rebbe, the Makor Baruch (1895-1963). Born to Rav Yisrael of Vizhnitz and Rebbetzin Hinda, a daughter of Rav Meir Horowitz of Dzikov, Rav Baruch was named after his grandfather, the Imrei Baruch of Vizhnitz, who had passed away two years earlier. In 1912, Rav Baruch married Henia, a daughter of Rav Yissachar Dov of Belz. He married a second time, to Tzyril, a daughter of Rav Eliezer Nisan of Dzikov/Tsfas, in 1923. He then became Rabbi of Polein-Riskova, and then served as the Rabbi of Kotzman, Romania, for nine years. He established a Talmud Torah, a Beis Yaakov school and worked extensively for Agudas Yisrael. In 1935, Rabbi Baruch moved to Seret, a Romanian town of about 2,000 Jews. The Ahavas Yisrael passed away soon afterwards and Rav Baruch became the Admor of Seret-Vizhnitz. It is estimated that of about 150,000 Romanian Jews exiled to Transnistria (including all those from Seret), some 90,000 perished of hunger, cold and persecution. Rabbi Baruch was ransomed for a huge sum in Adar of 1944 and made his way back to Romania. He finally moved to Antwerp, Belgium in 1946 together with his brother, the Imrei Chaim, and they stayed there for close to a year. He arrived in Eretz Yisrael in Sivan 1947, and set off to Haifa where he set up his court. There Rav Baruch established a yeshivah, a Talmud Torah and other Torah institutions. This laid the ground for the establishment of the famous community of Ramat Vizhnitz, built on the side of Haifa's Mount Carmel, laying its foundation stone on the 3rd day of Tammuz, 1954. Rabbi Baruch passed away at the age of sixty-eight before the culmination of his building project.

May the merit of the tzadik Rabbi Baruch Hager protect us all. Amen