Miriam Mizrahi , popularly known as ha-koveset (the laundress), to have been a pious miracle worker who helped countless people with severe fertility problems in the mid-twentieth century. 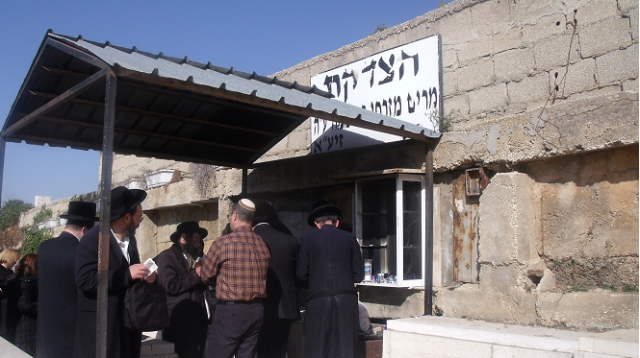 Miriam Mizrachi was born in Kurdistan at the end of the 19th century. She and her husband were childless, and when her husband passed away Miriam followed her lifelong dream to live in Israel, walking by foot to the Holy Land.

Miriam lived in Jerusalem where she worked as a washerwoman, cleaning the laundry and homes of many families in Meah Shearim. Among the families she cleaned for was the family of the Reb Shloimke of Zvil, the Zviller Rebbe, who was widely known as a miracle worker.

Miriam was a very simple woman whose hands were swollen from doing laundry all day and who couldn’t read or write. She was extremely G-d-fearing, earning herself the nickname “Miriam HaNeviya” or Miriam the Prophetess.

The current Zviller Rebbe remembers Miriam the Washerwoman from his youth. He recalls:

“I did not know that they would ever make Miriam the Washerwoman into a historic figure, she was a very, very simple woman.

“They said that on the High Holy Days, from the beginning of the month of Elul, she fasted for forty days in a row and would eat only at night, usually receiving meals from the people she worked for. Even before Purim, she fasted for three days. She would travel to Meron to pray. Her clients recognized that she was a special woman and they asked her to pray for them, and she agreed and prayed at the Western Wall on their behalf.

“My mother told me that in the morning when Miriam awoke, she lifted up her hands and said, “Shalom Shechina [Divine Presence], Shalom Avraham Avinu [Abraham], Shalom Moshe Rabbeinu [Moses],” and more Shaloms to many Tzadikim [righteous people]. Then she sat down to eat, said “Thank You,” kissed the bread, and ate.”

When Miriam was an old woman, the story goes, she came to the Zviller Rebbe crying, “Who will remember me after I die? I have no children!”

And Reb Shloimke promised her, “Even after you die, whoever comes to you with a problem, you will be able to intercede to bring them salvation.”

May the merit of Miriam Mizrahi protect us all. Amen