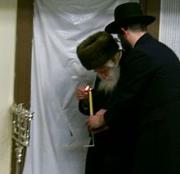 In his youth, he studied in Vizhnitz under the Vizhnitzer Rebbe, Rabbi Eliezer Hager. Before World War II began Portugal and his father left their hometown of Sculeni in Moldova (the town from which derives the name of the hasidic sect that they led) and went to Chernowitz in Ukraine, where they spent the Second World War.

After the war father and son went to Bucharest, Romania. The senior Portugal was arrested several times by the Soviets, who ruled Romania until 1968. In April 1959 the pair were arrested and accused of treason. After a big outcry and trough the work of Rabbi Menachem Mendel Schneerson, the Lubavitcher Rebbe and other world Jewish figures, United Nations officials facilitated their release. They were released in September 1959, and arrived in the US in August 1960 after the State Department offered them US citizenship.

Rabbi Portugal lived primarily in the Boro Park section of Brooklyn but spent some time including about half of the Jewish holidays in Williamsburg, Brooklyn where his father lived. He was widely sought after for his blessings and advice. He deprived himself of bodily pleasures such as sleeping very little, not sleeping in a bed and eating no more than one meal a day and for his humble nature. He was also known for his battles against modernities such as watching television and use of internet.

He encouraged shaving the scalp except for boys under three and unmarried girls.

Rebbe Portugal died on April 1, 2019 in Johns Hopkins Hospital surrounded by his family. His funeral the following day as prescibed by Jewish law took place in Brooklyn was attended by thousands of people. The funeary proceedings were marked by a duo of incidents which each caused injury to a NYPD officer; the first in which an officer slipped and had his ankle broken by a hearse which ran over his leg and another where an out of fuel drone crashed down upon a police officer's head.

Following his father, he was a composer of Hasidic songs. He always (except on Shabbat and Jewish Holidays) carried with him a small tape recorder to record any new tune that would come to his mind. He composed thousands of songs. Most of them were forgotten after they were recorded, but many of them were sung at his tishen, and a handful of them have become classics in the Hasidic community.

Rabbi Portugal had close ties with many Hasidic rebbes. He headed the Chesed L'Avraham charity organization in Israel founded by his father, and was actively involved - traveling worldwide - in fundraising for it.

Since the death of his wife, Reizel (daughter of Rabbi Menachem Ze'ev Stern of Oberwischau), in 2005, he changed some of his practices, including traveling less and wearing his peyos hanging down rather than tied around his ears.

Yisroel Avrohom Portugal died surrounded by his family and loved ones, on the 1st April 2019, at approximately 5:45pm.

May the merit of the tzadik Rabbi Yisroel Avrohom Portugal rotect us all. Amen