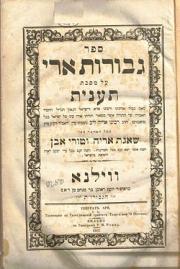 Rabbi Aryeh Leib ben Asher Gunzburg Born in Lithuania, c. 1695, he was a Rabbinical casuist. At one time Ginsburg was rabbi in Pinsk, and then later founded a yeshivah in Minsk. Here however he engaged in hostile dispute with the Gaon Yechiel Halpern, whose supporters eventually drove Ginsburg from the city. Legend has it that the Shaagas Aryeh was run out of the city of Minsk on an oxen cart. Due to the insult, as he left the city he remarked "What, Minsk isn't burning yet?" For years, fires that broke out were attributed by the Jews of Minsk to the curse of the Shaagas Aryeh.

His most famous book Shaagas Aryeh (Hebrew, שאגת אריה, for 'Roar of the Lion') was first published in Frankfurt am Main in 1755 and is still frequently quoted in rabbinical debate, as are many of his responsa. After its publication he became known as "the Shaagas Aryeh" after his book.

He became rabbi in Metz in France in 1765, but an early argument with his congregation led to him refusing to enter the synagogue except to give four sermons a year. Despite this he retained his post until he died in Metz on June 23, 1785.

Hasidim considered the Shaagas Aryeh "the definitive talmid hakham (great leader) of the generation", They maintain a legend that the Besht sought out the Shaagas Aryeh and "served him by putting his shoes on for him".

A legend exists of his death. During his studies a book-case fell on him, covering him with books. His students were able to rescue him after an hour or so and he related to them that he had been covered by the books of the authors with whom he had quarreled. He had asked forgiveness from all of them and they all complied save for one, Mordecai Yoffe (known as the Levush) who refused [This is a strange legend, as Mordecai Yoffe died about 80 years before Ginsburg was born]. He knew therefore that he was not long for this world, and pronounced the verse in Hebrew "Aryeh shoag mi loi yiroh"; i.e. that Aryeh(the lion, meaning himself) shoag (roars), but mi (an acronym of Mordecai Yoffeh, but can also mean 'who') loi yiroh (is not afraid).

It is speculated that this legend is the source of the urban myth surrounding the death of the French-Jewish composer Charles-Valentin Alkan, whose family originated from Metz.

May the merit of the tzadik Rabbi Aryeh Leib ben Asher Gunzburg protect us all. Amen