Rabbi Moshe Teitelbaum, also known as the Yismach Moshe, was the Rebbe of Ujhely (Sátoraljaújhely) in Hungary 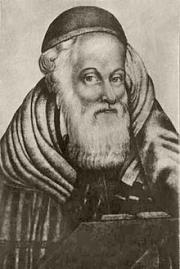 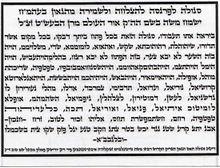 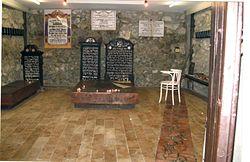 Rabbi Moshe Teitelbaum (1759 – 17 July 1841) (Hebrew: משה טייטלבוים), also known as the Yismach Moshe, was the Rebbe of Ujhely (Sátoraljaújhely) in Hungary. According to Leopold Löw, he signed his name "Tamar", this being the equivalent of Teitelbaum, which is the Yiddish for "palm-tree" (compare German "Dattelbaum"). An adherent of the Polish Hasidic Rebbe, the Chozeh of Lublin (as well as of Rabbi Sholom Rokeach of Belz), Rabbi Teitelbaum was instrumental in bringing Hasidic Judaism to Hungary. Though initially opposed to Hassidism, after his son-in-law introduced him to the Chozeh of Lublin, he soon became an adherent to Hassidism.

Teitelbaum first served as a rabbi in Przemyśl, and later in Ujhely, where he was called in 1808. In Ujhely he founded a Hassidic congregation which was independent of the Galician leaders. In 1822 Teitelbaum was suspected of having supplied amulets to certain Jewish culprits who had been cast into prison for libel, in order to assist them in escaping. When called upon to vindicate himself he declared that the amulets in question served only as substitutes for the mezuzah and that their only purpose was to protect their bearers against demons. Teitelbaum enjoyed an enviable reputation, with even Rabbi Moses Sofer paying him homage

Teitelbaum authored three main works, Heishiv Moshe ("Moses Responded", a collection of responsa), Tefillah Le-Mosheh, (a commentary on Psalms), and Yismach Moshe ("Moses Rejoiced", 1849; 2d ed. 1898, containing homilies on the Torah), and he is commonly referred to by the title of the latter. He originally wrote a significant portion of his commentary on Psalms on the backs of personal notes handed to him by petitioners seeking his aid and blessing. These notes were transmitted via a succession of prominent hasidic rabbis, until finally being edited and published for the first time in Kraków in 1880.

His descendants became leaders of the communities of Sighet and Satmar known as Satmar Hasidim, and his name 'Moshe' was the inspiration for the 'Vayoel Moshe' series of books authored by his descendant, Rebbe Yoel Teitelbaum of Satmar. He was said to have identified his three prior gilgulim (incarnations in Kabbalistic terminology), saying that in his first gilgul he had been a sheep in Yaakov Avinu's flock, in his second incarnation he lived in the time of Moses, and in his third incarnation he lived during the time of the destruction of the First Temple. Out of humility, he did not disclose the nature of the third incarnation, but his followers asked another Rebbe, who identified it as the Biblical Prophet Jeremiah. Regarding the first gilgul, he taught his followers the song, he said, that he recalled Jacob would sing as he tended the sheep. The song, Yankel hut eine kleine Lamm, is not related to the modern Mary Had a Little Lamb.

He was once learning the story of Korach in the Torah with his young grandson the Yetev Lev and the Yetev Lev made a comment showing that he didn't think much of Korach, who rebelled against Moses. At that point the Yismach Moshe admonished him saying that we have no understanding of the greatness of Korach. In fact, added the Yismach Moshe, he himself was a gilgul from that "Dor HaMidbar" (generation of the desert) and had not been sure whom to follow, since this seemed to be a valid argument between the two greatest men of the generation. His grandson then asked him, "If so what did you do and how did you save yourself?" The Yismach Moshe answered, "Takeh, I decided to follow Korach. I was swallowed up by the earth and later came out as my third gilgul."

His followers would teach of his previous identification with Jeremiah, and how this affected his present life. In his later days he yearned so much for the coming of the Jewish Messiah and the rebuilding of the Temple, that he wore his Shabbat clothing the entire week, anticipating the Messiah's arrival. He died on July 17, 1841.

May the merit of the tzadik Rabbi Moshe Teitelbaum protect us all. Amen