Rabbi Meir Lublin or Meir ben Gedalia (1558 – 1616) was a Polish rabbi, Talmudist and Posek ("decisor of Jewish law"). He is well known for his commentary on the Talmud, Meir Einai Chachamim. He is also referred to as Maharam (Hebrew acronym: "Our Teacher, Rabbi Meir" 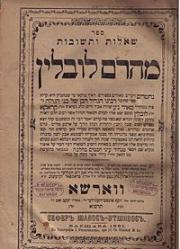 Maharam was born in Lublin, Poland. He was descended from a family of rabbis, and his father, Gedaliah, was an eminent Talmudist. His principal teacher was his father-in-law, Isaac ha-Kohen Shapiro, rabbi of Kraków. Maharam's knowledge of the Talmud and Poskim was such that he was invited to the rabbinate of Kraków in 1587, when he was not yet thirty years old. In 1591 he became rabbi at Lemberg. (In Lemberg he was engaged in a controversy with Rabbi Joshua Falk concerning a bill of divorce.) In 1613 he became rabbi at Lublin and established a yeshiva. He was well known in the role of Rosh Yeshiva there, owing to his renown as a Talmudic scholar. Many of his students became prominent rabbis or heads of yeshivot; his most famous student is probably Isaiah Horowitz (Shelah HaKodesh). A daughter of the Maharam was married to Benjamin Beinisch Gelernter, whose parents were Rabbi Zachariah Mendel Gelernter and the daughter of the Maharal of Prague.

Rabbi Meir was a sharp polemicist and critical of the people around him, and did not refrain from criticizing the most respected scholars of his generation, including the Rema, Beis Yosef, Maharsha, Maharshal. He even dismissed the Rishonim when he felt that they have erred. He thought highly of his genius and had a firm disposition and was generally dogmatic, as he states in one of his responsa (no. 111) "without any doubt, and there is no way of settling [the issue] in any other way. " When the Maharsha's commentary to the Talmud was first printed, he dismissed it and wrote "from what i wrote you can see that he can't find his hands and feet in the house of learning, and it is an error." Only later when he realized that the Maharsha was a greatly respected scholar he confessed to him "and what happened happened, and love covers all sins." When a Rabbi in Worms, whom he thought to be a lesser authority than him, rejected his opinion he was deeply offended. He writes that he wanted to embarrass him in the synagogue of Lublin and to convene with the leaders of the communities to demote him from his position, but he decided not to because "perhaps it will be an honor for him that a person like me is occupied with someone like him." R' Meir in another place (no. 88) boasted of having produced numerous students who became heads of yeshivas and religious authorities.

While he served as the head of the Yeshiva in Lublin, R' Shimon wolf Aurbach, the son in law of the Maharshal, headed another Yeshiva in the same town. They both had different styles of interpretation, and this usually lead to quarreling among the students as everyone claimed that their Rabbi had the correct way. From then on, the communal leaders decreed that the students could not tell one another of the new interpretation of the Rabbis, and that whoever violated this ban would be expelled from the Yeshiva. However, this didn't last for too long. When the Maharam once had a difficulty explaining Tosfot and was eager to find out how R' Shimon Wolf had resolved the issue, he asked his students to find out. When the right opportunity came up, they grabbed one of the students of R' Shimon Wolf, beat him up and forced him to repeat the interpretation of his Rabbi. When the Maharam heard of it, he openly declared that only his interpretation is the correct one. A great controversy flared up between the two Yeshivos. The leaders of Lublin decided that they would send a letter to Sholomo Aboav Rav of Amsterdam to decide which one is the correct interpretation, and whichever interpretation he deems appropriate, the other would lose the right to remain as head of the Yeshiva. When the Answer came back from Amsterdam it was clear that it was in favor of R Shimon Wolf. The communal leaders decided to demote the Maharam of his position as head of the Yeshiva. But the humble R Shimon Wolf refused to accept this decision. Instead they invited the Maharsha to assume the Rabbinate in Lublin. The Maharsha gave a sermon Shabbos night and convinced the community of Lublin to keep both of these Torah giants among them, and the controversy ended

Meir Einei Chachamim is his best known work, a "casuistic commentary" on the Talmud, Rashi, and Tosafot together. It was published by his son Gedaliah and has since been printed in all principal editions of the Talmud under the heading "Maharam." It is considered one of the important commentaries on the Talmud. The commentary, generally, employs short and simple explanations.

After his death, over 140 of the Halachic questions posed to him were published in a collection of responsa entitled Mnahir Einai Chachamim.

may the merit of the tzadik Rabbi Meir Lublin protect us all. Amen