One of the foremost disciple of the Baal Shem Tov. 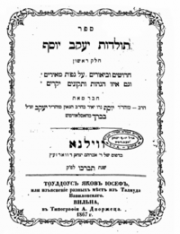 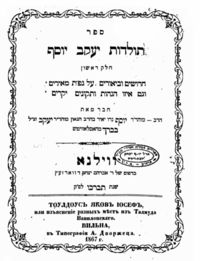 Rabbi Yaacov Yosef, the foremost disciple of the Baal Shem Tov, and one of the earliest champions of the chassidic movement, was a descendant of the kabbalist Rabbi Shimshon of Ostropole, and Rabbi Yomtov Lipman Heller, author of Tosefot Yomtov, the famed commentary to the Mishnah. His unique approach to Chasidut combines his ancestors' field of expertise, blending scholarship in both Kabbalah and Halachah.

While still a young man, Yaacov Yoseph was appointed Rabbi of Sharogrod. Although he sharply opposed the budding chassidic movement at that time, on one occasion he met the Baal Shem Tov and was closeted with him for several hours; he then emerged as an admirer of the new movement, becoming one of its leading proponents. His congregants, who disapproved of his change of heart, forced him to leave his post. He served as Rabbi of Rashkov and of Nemirov, and then in 1770 he became the Rabbi of Polnoye. He was revered for his unexcelled piety and his dedication to Torah study.

Although the Baal Shem's closest disciple, he was not chosen to succeed the master upon his death. The dynamic Maggid of Mezritch was chosen, as R' Yaakov's inner-directed and scholarly nature made him unsuitable as the leader of the popular movement. R' Yaakov Yosef's work Toledot Yaakov Yosef is a highly intellectual exposition of chassidic philosophy; it occupies a preeminent place in chassidic literature, and can be found on the shelf of every chassidic beit midrash. It was the first book to be published by chassidim. The author weaves together kabbalistic and profound philosophical concepts, combining them with halachic themes and organizing his material according to the weekly Torah portions. He quotes his mentor, the Baal Shem Tov, more than 280 times. This book was praised by many chassidic giants. R' Pinchas of Koretz called it "Torah from the Garden of Eden".

R' Yaakov Yosef was older than the Baal Shem Tov (1698-1760), and while his exact year of birth is unknown, it is believed that he lived more than 110 years. Chassidim refer to this giant of the spirit simply as "the Toldos".  He left behind one righteous son, Rabbi Avraham Shimshon, and one righteous daughter.

"Every word, every letter in this book, Toldot Yaakov Yosef  , is precious," Reb Yayvi, the Maggid of Ostra told his son, Getzel. "There is just one passage whose meaning eludes me." Reb Yayvi turned again to the obtuse section and pored over it for a long time but could not fathom its meaning.

"Come, Getzel," he announced to his son. "We are going to R' Yaakov Yosef himself for an explanation." After many hours of travel, the carriage finally stopped in front of R' Yaakov Yosef's house. They found R' Yaakov Yosef lying in bed. It was several days before he would die.

"I have come to you for Torah knowledge. I bought your precious book and enjoyed it thoroughly, studying it closely from cover to cover. There was one passage, however, which I could not understand. I have come here to ask you for an explanation."

R' Yaacov Yosef motioned to the bookcase where his volume stood among other books. "Bring it here and show me exactly which passage you are referring to." The visitor did as he was told. As soon as he opened the book, it fell to the particular paragraph in question. He handed it to the man in bed.

As soon as he began explaining, R' Yaakov's face began to glow with an unearthly aura, his body appeared like a burning torch. The very bed he lay on rose in the air and hovered, surrounded by a pillar of fire !

"When he finished his explanation," Reb Getzel would tell over many times in the years to come, "everything returned to normal. The fire disappeared and the bed rested once more on the floor with its occupant, an exhausted old man."

"It is a sight I will never forget all my days," Reb Getzel would say, swearing by his beard that it was all true. (Sifrei Kodesh)

May the merit of the tzaddik  Rabbi Yaakov Yosef of Polnoye  protect us all, Amen.