Rabbi David Abukhtsira (1866 - 14th December 1919, December 6, 1919) was one of the leaders of the Jewish community in Tafilah, Morocco and author of books. Executed in Morocco by a local leader. 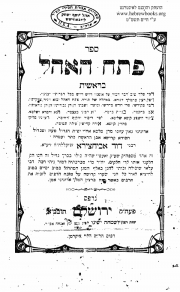 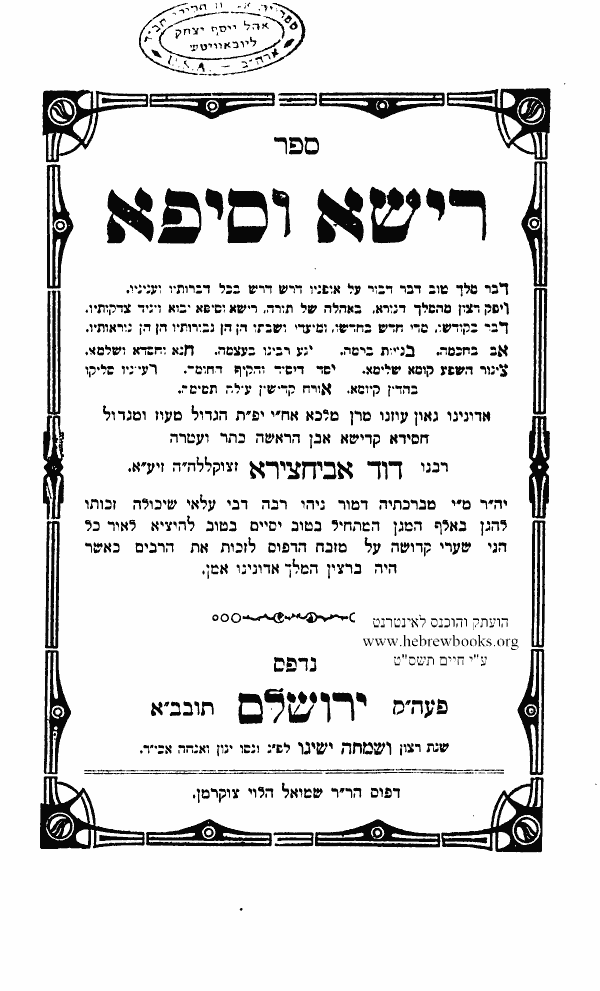 Rabbi David Abukhtsira (1866 - 14th December 1919, December 6, 1919) was one of the leaders of the Jewish community in Tafilah, Morocco and author of books. Executed in Morocco by a local leader.

Born in the year 1866, as the eldest son of Rabbi Mas'ud Abuchatzira in the town of Tafilalat, Morocco, at the height of the leadership of his grandfather Rabbi Yaakov Abuchatzira. David was alone in the Torah, practiced celibate practices, and did not interfere with community leadership.

After the death of his father in the year 1908, at the age of 42, Rabbi David took over the leadership of the community, but less than a year later he distributed his powers to his relatives: his uncle, Rabbi Yitzchak Abukhtsira assumed the financial management of the yeshiva. His uncle, Rabbi Eliyahu Abuchatzira, was responsible for the connection between the Jewish community and the Moroccan government, and his brother Baba Sally, who was eighteen at the time, was appointed head of the yeshiva.

From the year 1909 until the end of the year 1914, Rabbi David with his father-in-law Rabbi Eliyahu and Rabbi Moshe Turgman in the attic of his home where they made torment and obituaries learned the hidden and hidden teachings.

Rabbi David married and widowed twice, and he had eight sons and one daughter. All his sons except the youngest of whom he died. One of his daughters, Esther, married his younger brother, Rabbi Yitzchak Abuchatzira, and after her death, he remarried.

Although suffering from many diseases, he was known as a happy person.

Avoid going out into the street. His seminary and mikvah were in his home. When he went outside, he would not walk down the street but skip from roof to roof, and at that time they would declare that a woman would not leave the door of her house until he returned to his house.
He was a vegetarian, fasted many times and few to eat.
Not sleeping on a bed but on a chair.
Every morning before he graduated, he would lock himself in his room, where he would enter a coffin and cover himself with ashes to remember the day of the death and overcome the pride of pride.

The French army conquered Morocco in 1917 (1917). The Arabs were led by Muhammad Muhammad bin Qasem and fought in the French, and after a long time, the French retreated. Muhammad Muhammad then fought with the Moroccan royal family, killed and seized the throne. P. (1919) issued a decree to kill all citrus Jews in the Tafilat district, claiming that they had been secretly conspiring with the French occupier in order to expel the rebel leadership under his leadership.

In order to increase anxiety, he did not publish a date for the decree. On Saturday, December 19, 1943, Rabbi David wore black sandals instead of the white Sabbath clothes he used to wear. On Saturday at noon, Mulay Muhammad began to concentrate on the Jews of the area in order to execute them. Mulay Muhammad's soldiers surrounded the Malah and caused great fear. Then Rabbi David began to encourage the congregation, saying that he prayed for the sovereign of a world that instead of killing all members of the congregation, only he himself would die. After all the Jews gathered in the main square, Mulay Muhammad's advisers convinced him that he should kill only the Jews, because if they died, they would not be able to collect taxes and other payments.

A few days after Rabbi Abukhtsira's murder, his body was transferred to the community leaders, and he was buried with a modest funeral, in which even the rebel corps invaded anyone to dare to mourn and cry for Rabbi David.

May the merit of the tzadik Rabbi David Abukhtsira protect us all. Amen