Rabbi Nosson Tzvi Finkel  was an influential leader of Orthodox Judaism in Eastern Europe and founder of the Slabodka yeshiva, in the town of Vilijampolė. He is also known by the Yiddish appellation der Alter ("the Elder") and as the Alter of Slabodka 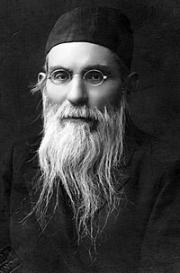 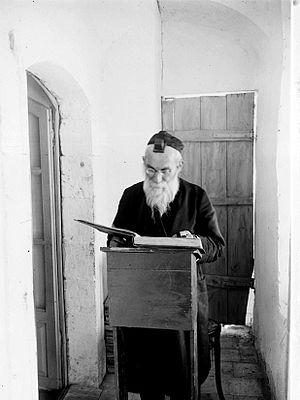 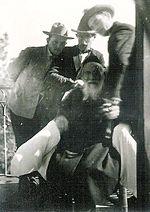 Rabbi Nosson Tzvi Finkel (1849 in Raseiniai, Russian Empire – 1927 in the British Mandate of Palestine), also known as Nota Hirsch or Natan Tzvi Finkel, was an influential leader of Orthodox Judaism in Eastern Europe and founder of the Slabodka yeshiva, in the town of Vilijampolė (a suburb of Kaunas). He is also known by the Yiddish appellation der Alter ("the Elder") and as the Alter of Slabodka Many of his pupils were to become major leaders of Orthodox Judaism in the USA and

Finkel was orphaned at an early age, and not much is known about his formative years. At a young age, he went to study at the Kelmė Talmud Torah under Rabbi Simcha Zissel Ziv, "the Alter of Kelmė."

Despite his influence, he was an intensely private person. Yet, he personally oversaw the complete student body of the yeshiva.

His motto was summed up in the words Gadlus HaAdam ("Greatness of Man"). He stressed the need for mussar (ethics), using works such as those of Rabbi Moshe Chaim Luzzatto, polishing the character traits of his students so that they would aspire to become gedolim - "great ones" in all areas of both scholarship, and personal ethics.

He spent ten out of every twelve months with his students full-time, only returning to his wife for the Jewish holidays. He had special agents who would keep an eye out all over Europe for teenagers with an aptitude for both scholarship and leadership, recruiting them and bringing them back to Slobodka. He attained unusual success, and his students subsequently reflected that he was a master of the human psyche and knew just which psychological buttons to press to give direction to his students' lives.

He would monitor the extracurricular behavior of students, judging their character faults and strengths. He was responsible for deciding which boys would share rooms together, weighing the strengths of one against the other. Some were chosen to be his personal assistants. He stressed the importance of outer appearance and the need for neatness and cleanliness. He did not want the image of the poor, tattered, down-trodden yeshiva bochur (yeshiva student) to be associated with the alumni of his institution. The rabbinical and Talmudical graduates of the Slobodka Yeshiva tried to live up to a higher code of dress and deportment, to the point of being accused of being dandies.

He would send teams of his trained prized pupils to places that needed a boost in religious observance and learning of Torah. His own son, Eliezer Yehudah (Leizer Yudel) Finkel eventually became the head of the far older Mir yeshiva, eventually leading it all the way to Jerusalem where it is today the largest post-high school yeshiva in the world with thousands of students.

His main opponents in the "yeshiva world" were first and foremost Rabbi Chaim Soloveitchik and as a result the Brisk yeshivas, who were adamantly opposed to any changes in what they believed to be the time-tested ways of yeshiva education. To this day, their yeshivos, based mainly in Jerusalem today, do not teach mussar (ethics) as a separate curriculum, but focus on pure Talmud study.

Finkel's opponents argued that the pure focus on the Talmud would automatically create greatness in both scholarship and ethics. But Finkel believed that, while this might have been true in previous generations, the modern age was different. In his view, too many new enticing secular ideologies, such as Socialism and Zionism and the very real lure of atheism in universities, were becoming a replacement for traditional Judaism for many young Jews. He was determined to prove that what he had to offer was more appealing than anything the outside world could offer.

Finkel staged one of the most dramatic moves in the history of yeshivos. In the 1920s he decided to create a branch of his yeshiva in the Land of Israel, together with the dean Rabbi Moshe Mordechai Epstein, setting it up in Hebron and sending waves of hand-picked students there, culminating with his own permanent aliyah, "going up", to the Holy Land two years before his passing.

In the region of Palestine he founded his own institution in the town of Hebron called Knesses Yisroel - "Gathering of Israel", which moved to Jerusalem following the massacre of Jews during the 1929 Palestine riots in which many of the yeshiva students perished. This yeshiva today, Yeshivas Chevron in Jerusalem, has about a thousand students and is one of the most prestigious Lithuanian yeshivos in Israel.

May the merit of Rabbi Nosson Tzvi Finkel protect us all. Amen