Rabbi Yedidia Raphael Chai Abulafia (1806/7 - Tu Sivan, May 1869) was a well-known Kabbalist who served as the head of the Kabbalist Yeshiva of Bethel. 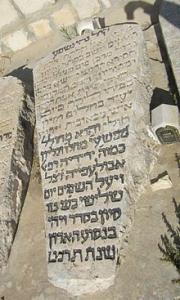 In the book "Chachamey Jerusalem," Israel's Dov Frumkin describes Rabbi Abulafia as "the righteous oppressed in anguish and earning a living from his wife, Hasida Kadisha, abdomen and pregnancy." The book "Eastern Jews" written by Moshe David Gaon about him was great in both the occult and the teachings of the Ashkenazi and his teaching methods were not foreign to him. He was also said to have been in intimate contact with the rabbis, including the geniuses of Kutna and Kalish, and that he consulted with R. Yehosef Schwartz. The greatness of the hidden wisdom can be seen from his introductions, his novels and comments printed in the books of the Aryan student Rabbi Chaim Vital. His books include the books "Road and Peace", and the book "Fruit Property" about the intentions of the Rash, many important notes written by him in the series The Rash is known as the "printed arrangement" since until then the arrangements were a photograph of manuscripts. In these important notes, his name was signed in the "Yerushalayim" and thus his name was carved among the sages of the Kabbalists.

Being anxious for religious observance, he opposed the establishment of general schools in Jerusalem, and when Dr. Ludwig August Frankel came to the city to establish the Melel school, he was the only Spanish rabbi to join the Ashkenazi rabbis and sign the great boycott, against the school. He founded a number of Jewish schools in Turkey, founded the Alliance School in Jerusalem, and his grandson Shlomo Abulafia was one of the teachers in the Jewish community.

In 1824, he was hit by a piece of cannonball in his leg as a result of the Egyptian shelling of Jerusalem. Doctors were unable to remove the shrapnel from his leg, causing his torment all his life and eventually causing his death. He was buried in the Mount of Olives cemetery.

May the merit of the tzadik Rabbi Yedidya Raphael Chai Abulafia protect us all. Amen