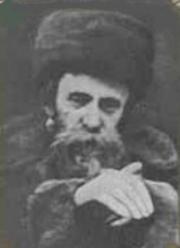 Rabbi Aharon inherited the mantle of leadership from his father, Yissachar Dov Rokeach, upon the latter's death in 1926. Known for his piety and mysticism, Rebbe Aharon was called the "Wonder Rabbi" by Jews and gentiles alike for the miracles he performed.

His reign as Rebbe saw the devastation of the Belz community, along with that of many other Hasidic sects in Galicia and elsewhere in Poland during the Holocaust. During the Holocaust, Rebbe Aharon was high on the list of Gestapo targets as a high-profile Rebbe. With the support and financial assistance of Belzer Hasidim in Mandatory Palestine, England and the United States, he and his half-brother, Rabbi Mordechai of Bilgoray, managed to escape from Poland into Hungary, then into Turkey, Lebanon, and finally into Mandatory Palestine in February 1944. After Rabbi Mordechai's sudden death in November 1949, Rebbe Aharon raised his half-brother's year-old son, Yissachar Dov, and groomed him to succeed him as Belzer Rebbe.

Aharon was the first child born to his parents, Rabbi Yissachar Dov Rokeach and Basha Ruchama Twersky, after 12 years of marriage. He was named after his mother's great-grandfather, Rebbe Aharon of Chernobyl, although his father later revealed that he intended to name the boy after Rabbi Aharon of Karlin. Aharon had a younger sister, Chana Rachel, who later married Rabbi Pinchas Twersky of Ostilla.

Aharon's mother died on 18 March 1884 when Aharon was 4 years old. His grandfather, Rebbe Yehoshua Rokeach, the second Belzer Rebbe, took the boy under his wing and oversaw his spiritual development. As he grew, Aharon spent much of his day ensconced in Torah learning and ate and slept little. He also concealed his accomplishments with a modesty that would last throughout his lifetime.

When his grandfather died on 30 January 1894, Aharon's father became the third Belzer Rebbe. Rebbe Yissachar Dov remarried to Chaya Devora Pecsenik and had another seven children. Rebbe Aharon was 22 years old when his half-brother Mordechai was born.

When he came of age, Rabbi Aharon married his cousin, Malka, the daughter of his father's elder brother Shmuel, the Rav of Sokal. After his marriage, Aharon lived with his father-in-law for several years. His strict regime of seclusion, deprivation and asceticism caused him to become seriously weakened, whereupon his doctors recommended a complete change of locale and sent him to a spa. Though he recuperated at the health resort of Kreniec, he still ate little, and his chronic sleep deprivation made it difficult for him to stand or walk quickly. On Shabbat, however, he would stand upright, walk quickly, and partake in the Shabbat meals with obvious pleasure.

He and his wife had five sons and four daughters. Several apparently healthy children died at birth, while those that survived were sickly and weak. Two daughters were both hearing- and speech-impaired. One daughter, Mirel, died in 1938; the rest were killed by the Nazis with their families.

When Aharon's father, Rabbi Yissachar Dov, died in Belz on Friday night, 30 October 1926, his 46-year-old son accepted the mantle of leadership at the funeral held after Shabbat.

While he continued to live a Spartan and reclusive existence, Rebbe Aharon revealed himself to be a warm and caring leader. He read each kvitel with great interest and prayed for the petitioner's salvation and success. At first he tried to limit the number of petitioners who sought his counsel and blessing to five per night, saying, "I simply can't take these tzoros (tribulations) of Klal Yisrael!" as he felt each problem as deeply as if it were his own. But eventually he allowed many petitioners to see him nightly.

Although the position of Belzer rav included being rabbi of the local township, Rebbe Aharon said he could not spare any more time. Two dayanim were appointed for this task, and they consulted with Rebbe Aharon only on difficult halakhic questions.

During World War II, Belzer Hasidim both inside and outside Nazi-occupied Europe saw saving the Rebbe as their primary goal. They spirited Rebbe Aharon — who insisted on being accompanied by his half-brother, Rabbi Mordechai — out of Belz into Wiśnicz, then into the Bochnia Ghetto, then into the Kraków Ghetto, and then back into the Bochnia Ghetto, narrowly avoiding Gestapo roundups and deportations.

In their most hair-raising escape attempt, the brothers were driven out of occupied Poland and into Hungary by a Hungarian counter-intelligence agent who was friendly to Jews. The Rebbe, his attendant, and Rabbi Mordechai, shorn of their distinctive beards and sidelocks, were disguised as Russian generals who had been captured at the front and were being taken to Budapest for questioning. After spending eight months in Hungary, the brothers boarded the Orient Express to Istanbul, and finally arrived in Israel in February 1944.

Both men lost their entire families to the Nazis. Rebbe Aharon's eldest son, Moshe, was burned alive in the Przemyslany shul at the same time as Rebbe Aharon was in hiding in that town. Later, Rabbi Moshe's wife and five children were murdered. Rebbe Aharon's eldest daughter, Rivka Miriam, and her husband, Rabbi Shmiel Frankel, both perished along with their seven children. Rebbe Aharon's other daughters, Adel Twersky and Sara Bracha Rosenfeld with their children, and two other sons, Rabbi Yisrael and Rabbi Yehudah Zundel with their children, were also slain. When he heard of these tragedies, the Rebbe displayed no emotion. Stoically, he continued to lead his Hasidim and perform his devotions.

In 1949 he married Chana Labin-Pollack, daughter of Rabbi Yechiel Chaim Labin, the Makova Rebbe, and widow of Rabbi Yosef Meir Pollack, the Bergsass Rebbe. Her first husband had been murdered by the Nazis in Bergsass, leaving her with a young son and daughter. Rebbe Aharon did not have children by his second wife, but raised her children and married them off. Meanwhile, Rabbi Mordechai also remarried and had a son, Yissachar Dov, on January 19, 1948. When Rabbi Mordechai suddenly died on November 17, 1949, Rebbe Aharon groomed his year-old nephew to inherit the dynasty. After Rebbe Aharon's own death in 1957, the boy was educated by a small circle of trusted advisors. He became the fifth Belzer Rebbe in 1966.

Rebbe Aharon was clearly touched by the Holocaust. He developed a very inclusive attitude to modern and even non-Orthodox Jews, which was a substantive change from Belz's pre-war practice of largely associating exclusively with other Haredim. Rebbe Aharon's second marriage also indicated a shift in the Belz leader's thinking: the ceremony was conducted by Rabbi Isser Yehuda Unterman, a member of the religious Zionist Mizrachi movement, a group which Belz had also previously held at arm's length. Unlike some of his other Hasidic rebbe peers, who had survived the Holocaust and made a practice of acknowledging and honoring their deceased followers and recounting their own experiences, it was Rebbe Aharon's personal custom to never speak of the Belz Hasidim who had died during the war, particularly members of his own family. On one occasion, rabbi and author Arthur Hertzberg, a descendant of Belz Hasidim, visited the rebbe and attempted to talk to him about Belz before the war:

He talked willingly of [my] grandfather, remembering that ... [he] had been his teacher when he was young, but he was totally silent when I mentioned my mother's father and her brothers, who had been his disciples until they were murdered during the war. I was upset. This strange behavior was later explained to me by his principal assistant: the rebbe had not once said any of the prescribed prayers (Yizkor, Kaddish) for his wife and children because those who had been killed by the Nazis for being Jews were of transcendent holiness; they were beyond our comprehension. Any words about them that we might utter were irrelevant and perhaps even a desecration of their memory.

For Rebbe Aharon, the only proper way to respond to the near-destruction of Belz and Hasidus, and honor the memory of the dead, was to build new institutions and slowly nurture a new generation of Hasidim. This task has been continued and largely accomplished by his nephew, the present Rebbe of Belz.

May the merit of the tzadik Rabbi Aharon Rokeach protect us all. Amen