Rabbi Yissachar Dov Rokeach (1854 – 29 October 1926) was the third Rebbe of the Belz Hasidic dynasty. He was the second son of Rabbi Yehoshua Rokeach (the second Rebbe of Belz), and served as the third Belzer Rebbe from his father's death in 1894 until his own death in 1927 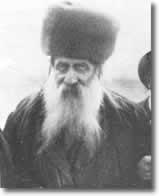 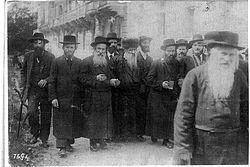 Rabbi Yissachar Dov Rokeach (1854 – 29 October 1926) was the third Rebbe of the Belz Hasidic dynasty. He was the second son of Rabbi Yehoshua Rokeach (the second Rebbe of Belz), and served as the third Belzer Rebbe from his father's death in 1894 until his own death in 1927

Yissachar Dov was born in the town of Belz, Galicia. His grandfather, Rabbi Sholom Rokeach, the founder of the Belz dynasty, named him after his own father-in-law, Rabbi Yissachar Dov Ramraz, the av beit din of Sokal.

Yissachar Dov married Basha Ruchama, the daughter of Rabbi Yeshaya Zushe Twersky of Chernobyl and granddaughter of Rabbi Aharon of Chernobyl. They had two children: Aharon, who would assume the mantle of leadership of the Belz Hasidim after his father's death, and Chana Rochel, who married Pinchos Twerski of Ustila.

After his first wife died, Yissachar Dov remarried Chaya Devora, daughter of Rabbi Avrohom Shmuel Pytshnik of Berezna. Together they had six children, including Mordechai Rokeach, who would later be known as Mordechai of Bilgoray and would accompany his half-brother Aharon as they, alone of all their family, escaped from Nazi-controlled Eastern Europe and arrived in Israel in February 1944.

Following his father's death in 1894, Yissachar Dov acceded to the positions of Rav of the town of Belz and spiritual leader of the Belzer Hasidim. He also stood at the helm of the Machzikei Hadas movement set up by his father.

He was an acknowledged leader of Galician Jewry and was renowned as a miracle worker,[citation needed] attracting thousands who sought his blessing. He created the yoshvim program in Belz which encouraged married and unmarried men to spend all day learning Torah in local shtieblach. These scholars were supported by local businessmen.

Rabbi Yissachar Dov strongly opposed Zionism, which he saw as a threat to Jewish continuity.

During World War I, the Russian army invaded and destroyed the town of Belz, which was under Austrian control. Rabbi Yissachar Dov fled to Hungary with many of his Hasidim. After the war, he lived for approximately two years in Oleszyce, in the home of a chassid named Yisrael Vogel. He returned to Belz to re-establish his court on Tuesday, 2 Shevat 5684 (January 8, 1924), at which time the town was under Polish rule.

May the merit of the tzadik Rabbi Yissachar Dov Rokeach protect us all. Amen