Student of the Baal Shem Tov 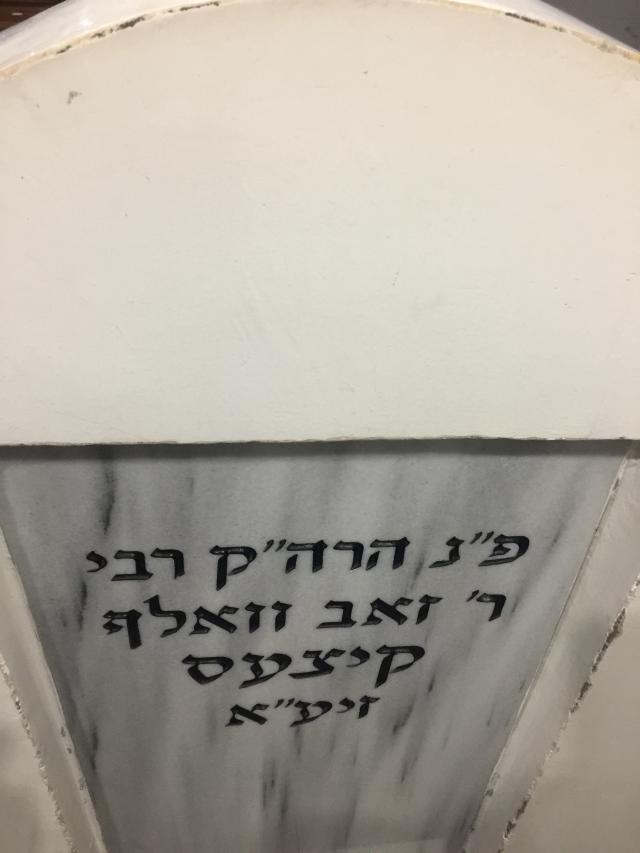 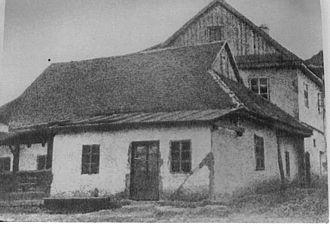 In a book called Me'ah Shearim, it is mentioned that Rabbi Ze'ev Wolf Kitzes was very strict about not eating meat that was kosherized with him not being present, even if his rabbi the Baal Shem Tov was present.

"Rosh Hashana will soon be upon us," said the Baal Shem Tov to his disciple, R' Ze'ev Wolf, "and I want you to prepare the 'kavanot' - the significant thoughts that one must concentrate upon - for the blowing of the shofar."

R' Ze'ev studied the various meanings and hidden connotations that lay in the arrangement of the shofar sounds, writing these all down for reference on Rosh Hashana. He placed his list in a coat pocket and considered himself prepared. But this form of preparation did not satisfy the Baal Shem Tov so he caused the list to disappear.

When R' Ze'ev approached the platform to perform his duties on Rosh Hashana he suddenly discovered his loss. His mind was now a blank as to which thoughts he must concentrate upon and his heart was broken within him. Breaking into bitter sobs, he was forced to perform his task unprepared.

After the services the Baal Shem Tov called him over and said:  "In the king's palace there are many doors and portals, each one with a key of its own. There is, however, one tool which can open all of them, that is an ax. The kavanot, the proper concentrations, are the keys which open the gates of heaven, each gate having its own particular kavana. But a broken heart is a tool which can penetrate all the gates and palaces of heaven."      (Sipurim Amitiyim)

The Baal Shem Tov and his personal sofer (scribe), Rabbi Tzvi, thought they were alone in the forest. They had come to this lonely place so that the Baal Shem Tov could show Rabbi Tzvi a heavenly pair of tefilin, the like of which he wanted the sofer to copy. But such an experience required many preparations, both spiritual and physical.

"We must first immerse ourselves in a mikve," Rabbi Tzvi thought to himself, "but where will we find a pool in this thick forest?" The Baal Shem Tov was undaunted by the lack. He could create one himself.  Suddenly he summoned all his strength and cried out, "Mikve Yisrael Hashem Moshia b'eit tzara," and a pool of water of water appeared before their eyes. The Baal Shem Tov was about to enter when suddenly he stopped and looked around.

"We are not alone here. I sense another mortal in this vicinity."  The two men combed the area and found Rabbi Ze'ev Kitziss hidden behind a thick tree.

"What are you doing here? Our actions are none of your business!" the Baal Shem Tov rebuked him. R' Ze'ev slipped away and nothing is known of what happened there in the forest after he left.  (Pe'er LaYesharim)

Had the matter been in the king's hands, he would never have allowed his favorite minister to be sentenced to death. But since it was the church who accused him of practicing Judaism in secret, the Spanish king had no jurisdiction over the matter. He was able, however, to postpone the minister's death for another year to allow the accused to conclude all the transactions and responsibilities which had been under his care. The king knew he could not hope for another year's extension so when it was over he asked for another month. The king could hope for nothing more short of a miracle from heaven.

The day of the auto-da-fe dawned. A huge square in the center of the city had been chosen as the site for the long awaited event. Hundreds of people crowded to witness the spectacle which was considered high entertainment by the common masses and nobility alike. When all was ready, the minister was led forward to the stake. But just as he was being tied to the funeral pyre, an earthquake threw everyone into a panicked helter skelter for refuge. In the grand melee, the minister managed to escape, aided by the quick action of the king, who had his servants transport him across the border.

A philosopher by inclination, the minister was intrigued by the phenomenon which had saved his life. Had it been a coincidence or could one claim it as a miracle? Did this earthquake fit into the natural scheme of events or had it come unexpectedly at the precise moment of execution, rendering it an act of God? While exploring the various theological possibilities, he came to the decision that if it was pure coincidence, he would continue to practice Judaism in secret, but if it came to light that the earthquake had no natural explanation, he publicly announce his conversion to Judaism.

His theological explorations led him to correspond with many Jewish scholars living throughout Germany, to none of which did he reveal, however, that he was the beneficiary of the miracle. None of the answers he received supplied the clear cut answer he was seeking. When this minister learned of a saintly scholar known as the Baal Shem Tov, he hoped to get a satisfactory decision from him.

The minister himself went to present his question to the Baal Shem Tov. When he reached the rebbe's court, he asked the first Jew he met, where the Ball Shem Tov's study was. The chassid Rabbi Ze'ev Kitzis, pointed out the way and the minister continued in that direction.

"Welcome to you, most honored minister from Spain," the Baal Shem Tov greeted the stranger as soon as he appeared in the doorway. The man stepped back in surprise and fear. No one knew, as yet, that he was the escaped victim of the Church's clutches.

"As for your question," the Baal Shem Tov continued before the man got his breath back, "go and ask that man in the courtyard. He will answer it for you."  The minister turned back in the direction he had come, meeting Rabbi Zev Kitzis near the gate. He outlined his problem to the disciple.

"Even if that particular earthquake had been ordained from the first day of Creation for a specific time and place, the very fact of your execution taking place then and there would signify an open miracle."

This was the answer  the minister was seeking. He took this as a sign to convert publicly and forever after maintained a strong tie with the Baal Shem Tov.            (Shmuot Vesipurim)

By the time Rabbi Ze'ev Wolf reached the inn near Brod, he already knew why the Baal Shem Tov had sent him to that city. The Baal Shem Tov had not revealed the purpose of his trip but R' Wolf learned that it had something to do with the cherem (excommunication) that the townspeople of Brod intended to place upon the Baal Shem Tov and his followers, having judged him and found him wanting. The Baal Shem Tov did not follow the code of Jewish Law, they argued; his ways were very strange and new and often contradicted their own customs. He was, in effect, a dangerous threat to Judaism.

The rabbi of Lvov agreed to come. As circumstances had it, he chose to stay at the inn near Brod on the very night that R' Wolf was stopping over for the night. R' Wolf decided to remain incognito and assumed the role of a poor beggar. He huddled up unassumingly by the stove to await the development of events. Throughout his journey, the rabbi of Lvov had enjoyed much publicity and honor. When he arrived at the inn, a festive meal had been prepared for him with many of Brod's notables. It was late by the time they had finished. Meanwhile R' Wolf arose from his corner by the stove to say the tikun chatzot . As was his custom, he prayed fervently, shedding copious tears. The guest was impressed and when R' Wolf had finished, engaged him in conversation. The poor man's manner, his knowledge and character impressed the rabbi even further.

"Where are you headed?" the rabbi wanted to know.  "For Brod," was the reply.

On the following day the two men went their separate ways to Brod. The rabbi of Lvov went directly to the meal tendered in his honor. At first he was honored with the customary speeches of welcome. During the main part, the crucial topic was presented to him, written out and organized in a report enumerating the reasons they felt why the Baal Shem Tov should be placed under cherem.

"One must not approach the concept of cherem lightly," the rabbi said in shock. "For a cherem one needs to include a large group of wise Torah scholars." He then went on to tell of the scholarly beggar he had met the night before.

"This man must be in Brod by now. I want you to search for him and bring him here. I would like his opinion on the matter at hand."

After finding him, R' Wolf was brought before the rabbi of Lvov. The sheaf of papers was placed before him and he was asked to express his opinion.

"What?!" Reb Wolf exclaimed in horror and pain. "You wish to put my beloved rebbe and master into cherem? What a crime! What an injustice! You claim that he does not keep the code of Jewish Law? He does not depart from it by one iota!" R' Wolf launched into a full justification of the Baal Shem Tov, rebutting every point that his rebbe had been accused of. When he stopped to catch his breath, the rabbi of Lvov turned to his audience.

"If the Baal Shem Tov has such devoted and worthy followers as this man, we cannot lift a finger against him."

The proposed cherem was abandoned and the two guests returned to their homes, the rabbi to Lvov and Reb Wolf to Mezibuz, glad to have accomplished his mission in Brod.             (Emmunat Tzadikim)

As to his family the year of born and passed away are not accurate:

The information presented at https://dailyzohar.com/tzadikim/108-- appears not to be accurate. Check please well the reliability of your sources.

According to what I know from mother, Ester Kitsis, born in Medzhibozh (western Ukraine) and been a direct descendant of Rabbi Zeev Wolf, he was born in 1700, passed away in 1765, lived in Medzhibozh and was a colleague of Rabbi Baal Shem Tov.

May the merit of the tzaddik  Rabbi Ze'ev Wolf Kitzes  protect us all, Amen.