Rabbi Shmaryahu Noah Schneersohn (1842-1923) was the fourth and last rebbe of Kopust, a branch of the Chabad Hasidic movement 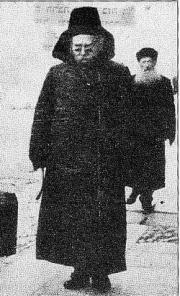 He was born in 1842 in the town of Lubavitch in Russia. He was the third son of Admor of Compost Yehuda Leib Schneerson. He studied with his grandfather Menachem Mendel Schneerson (The Plant was right), his father, and his brother Shlomo Zalman Schneerson. Married to Rebbetzin Esther Liba - his cousin Rabbi Yisrael Noah Mani'zin.

In the year 1889, after the death of his father-in-law, Rabbi Israel Noach asked him to fill his father-in-law's place as a leader in Ni'izin, but members of his congregation refused him to leave his rabbinate in Babroisk.

In his last years, with the pressure of the new Russian rule, the Rabbi was weakened and on the twentieth day of Tevet, the third year of death, he died.

May the merit of the tzadik Rabbi Shmaryahu Noah Schneersohn protect us all. Amen