Rabbi Raphael Berdugo (1747 - 1822), known as " Angel Raphael " was one of the greatest scholars and rulers of Morocco, accepted and preached. 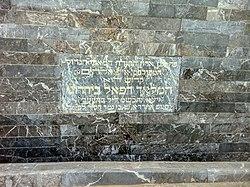 Rabbi Raphael Berdugo (1747 in Meknes – 1822), known a  Angel Raphael was one of the greatest scholars and rulers of Morocco, accepted and preached.

Raphael Berdugo (Hebrew: רפאל בירדוגו‎ ) a son of Rabbi Mordecai Berdugo, was a dayan, a scholar, and one of the greatest rabbis of Morocco.

His family - The Birdugo family is known in Morocco and especially in Meknes, as a dynasty of rabbis and dayan Poski Halakha, who began in the seventeenth century, served in the city.

During his thirties, he served as a dayan in the city of Meknes with his brother Rabbi Yekutiel who served as the court's father_Av Beit Hadin- as well as with the third dayan Rabbi Baruch Toledano. Over the years, all Western communities have been accepted him as one of the halakhic teacher of the entire generation. After his brother Rabbi Yekutiel - died, Rabbi Raphael served as the court's father.

Rabbi Raphael married a daughter of the Mashbir and had four sons.

Raphael was respected by his contemporaries, and his decisions continue to be a source of inspiration to Moroccan rabbis. He was an excellent speaker with great natural authority and did not shirk from conflict with the notables, pointing out for example their inconsideration for yeshiva students. He did not limit himself to his role as dayan (judge), but was a community activist. He made the shohatim abandon their old customs and follow the Castilian customs. He also introduced reforms in the laws of inheritance, for example, the inheritance of a husband and children in case of the death of a wife.

Raphael Berdugo had a number of adversaries. One of them was Rabbi Baruch Toledano. Their controversies were quite heated and have remained famous.

He also served as community leader and was a source of comfort  during the difficult period that befell Moroccan Jewry: Pereot Takan, leads by Yazid of Morocco, the riots, epidemics, and years of drought.

Listed as a saint in Culte des Saints et Pélerinages Judéo-Musulmans au Maroc. It is noted that upon his death, his remains did not decompose but remained intact until their transfer to Meknes years after his death.

May the merit of the tzadik Rabbi Raphael Berdugo protect us all. Amen