Rabbi Aaron Monsonego (Hebrew: אהרון מונסונגו; 9 February 1929 – 7 August 2018) was a Moroccan rabbi who was the Chief Rabbi of Morocco. 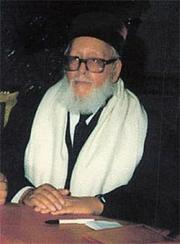 Rabbi Aaron Monsonego (Hebrew: אהרון מונסונגו; 9 February 1929 – 7 August 2018) was a Moroccan rabbi who was the Chief Rabbi of Morocco.

Rabbi Monsonego was born in Fez, Morocco, to rabbi Yedidya Monsonego, the chief rabbi of Fez and Morocco. In his youth, he studied at the "Em Habanim" school and at the yeshiva of Rabbi Meir Israel in Fez.

Between 1945 and 1952 he studied at the Yeshiva of Aix-les-Bains (Yeshivat Chachamei Tsorfat in Aix-les-Bains, France, under the tutelage of rabbis Ernest Weill and Haim Yitzhak Chaijkin. Between 1950 and 1952 he served as a teacher there. In 1951 he received rabbinic ordination and rabbinic judgeship from the Council of the Three Great Orthodox Rabbis of Paris and from his rabbi, Haim Yitzhak Chaijkin.

After his father died in 1994, he was appointed to replace his father as the Chief Rabbi of Morocco, together with Rabbi Shimon Suissa. In 1998 he remained alone in the position after Rabbi Suissa retired.

In July 2009, Muhammad VI of Morocco granted him the knight's emblem in the throne.

Due to his worsening health and the death of his wife, he left Morocco for Israel in December 2010 to live at his children's home in Jerusalem and Modi'in Illit. In April 2017 he had a stroke and was hospitalized. He died on August 7, 2018, in Jerusalem, and was buried on Har HaMenuchot in Jerusalem.

Rabbi Aaron Monsonego considered being close to the royal palace in Rabat, and to the king of Morocco Muhammad VI. The latter, as a token of appreciation for the work of Rabbi Monsongo, did not approve the appointment of a new rabbi below him after immigrating to Israel, and in the official kingdom events held after immigrating to Israel, an empty chair was left in his honor.

May the merit of Rabbi Aaron Monsonego protect us all. Amen