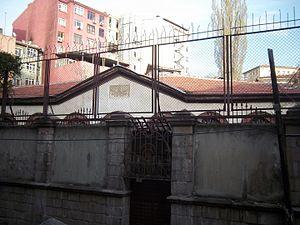 Rabbi Judah ben Samuel Rosanes (1657-1727) was Rabbi of Constantinople and son-in-law of Abraham Rosanes I. His teachers in Talmud and rabbinics were Samuel ha-Levi and Joseph di Trani the Younger. On account of his knowledge of Arabic and Turkish he was appointed by the government as chief rabbi ("hakam bashi") of the Ottoman empire. He died at an advanced age in Constantinople on April 13, 1727.

Judah took a very active part in condemning and denouncing the Shabbethaians, and he was one of the signers of an appeal to the German communities to oppose the movement.He wrote:

Parashat Derakim (Constantinople, 1727), a work containing twenty-six homiletic treatises on various subjects.
A pamphlet entitled Derekh Miẓvotekha, a treatise on the 613 commandments, based on the treatises on the same subject by Maimonides and others.
Mishneh la-Melek (ib. 1731), glosses and comments on Maimonides' Mishneh Torah; later it was printed together with the Mishneh Torah.
This work and others were edited and published by his devoted pupil Rabbi Yaakov Culi.

Most of his writings were stolen, as testified by his disciple, Rabbi Yaakov Kuli, who put in order his writings. From the books we have today we know:

Mishnah to Melech on Mishnah Torah to Maimonides.
CrossroadsPdf file - Jobs in various matters.
Through your mitzvos PDF file - about how many mitzvos and disputes in these matters. In this essay he compares the numerator of the mitzvos of Maimonides in the Book of Mitzvos, the Maimonides in his observations on Maimonides there, and the SMG. It shows how for all the methods the numerator of the thirteen mitzvot, the Ramach mitzvot made and the Shasa Levin, is observed, and explains how the principles of each method are applied in the details of the numerator of the mitzvot of that method.
Comments on the book of education - was published in Frankfurt am Main by HaOder, 1903. Due to disruptions that occurred in them, their value was written by Rabbi Chaim Dov Shaval, and was published by the Rabbi Kook Institute, Jerusalem, 5722.

May the merit of Rabbi Judah ben Samuel Rosanes protect us all. Amen