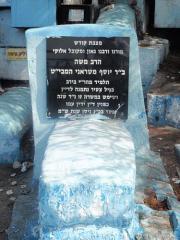 Rabbi Moshe of Trani was the son of a the famous rabbi, Rabbi Yosef of Trani (the elder). At the age of 16, Rabbi Moshe came to Eretz Yisrael settled in Tzefat, and joined the famous yeshivah of Rabbi Yaakov Beirav.

He was one of  four people to receive the special semicha-ordination from Rabbi Yaakov Beirav in 1538, in Tzefat, along with Rabbi Yosef Karo, Rabbi Moshe Cordovero, and Rabbi Yosef Sagis.

Soon after, he was in charge of his own yeshivah, where he taught for about 60 years. Great torah scholars came out of his yeshivah. The great rabbis of Tzefat recognized his brilliance in Torah, and often consulted with him on matters related to halacha (Jewish law).

His main work was Kiryat Sefer, an extended commentary on Rambam's Yad Chazakah. Hamabit (which he was nicknamed after), was halachic responsa with 841 answers. He also wrote Beit Elo-him (House for G-d),  – A thematic discussion of the elements of prayer.

Rabbi Moshe of Trani left behind a young son Rabbi Yosef of Trani, who later became one of the greatest rabbis of his generation.

There is a custom of plucking grass from the cemetery. Rabbi Moshe stated that we pluck the grass after the burial as a reminder of the resurrection. The idea stems from Psalm 72:18: "They shall spring up as the grass of the field".

"Regretting our past sins helps us to clarify our motive for changing our moral behavior. We want our motive in bettering ourselves to be purely for the performance of God's Will, although people can decide to refrain from sinning in the future for far less noble causes. They may change their ways because they are no longer capable of continuing to sin; or they can no longer support a lifestyle that includes a given sin; or they do not feel themselves attracted to it anymore. The only way that we can be sure that our decision to change our behavior is based on God's Will, is to feel regret over the fact that we have done it".....(Rabbi Moshe of Trani)

May the merit of the tzaddik Rabbi Moshe of Trani protect us all, Amen.