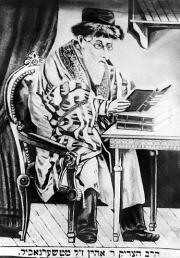 After getting married, he wished to continue living in Chernobyl near his father Rabbi Mordechai, but he ordered him to leave town and travel to other cities to lead Jewish communities. Only after being forced to leave, R' Aharon left. Upon the death of R' Mordechai in 1837, R' Aharon returned back to Chernobyl and took over the place of his father.

R' Aharon established a large chassidic following in Chernobyl. He was known to have ruach hakodesh (divine inspiration) and power in his eyes to know the life of an individual person, from his time of birth untill the present .

A renowned businessman by the name of Heilprin was privy to the doings of the nobility. Through his contacts he had heard that a certain aristocrat threatened that if the Jews didn't give him 20,000 rubles by the Passover holiday, he would punish them with terrible edicts. He immediately posted a letter to the holy Rabbi Aharon of Chernobyl requesting that he and his brothers, also notable scholars and rebbes, exert themselves to raise the enormous sum.

The response of R' Aharon amazed everyone. When he read Heilprin's letter he said simply, "Why is he bothering me with these fantasies?" The rebbe's secretary was shocked, "But Rebbe, this is a grave matter for all the Jews!"  R' Aharon, however, paid no attention. Heilprin dispatched a messenger to speak directly to Reb Aharon, but the  messenger received the same response. "Please, Rebbe, give me something in writing that I can present to my employer, or else he may refuse to believe that I even saw you." The rebbe agreed and told him, "Go back to your employer and tell him to worry about business and forget about this thing."

The matter of the nobleman's threat came to the ears of R' Aharon's brother, Reb Yitzchak of Skver, and he also contacted R' Aharon, asking him to make every effort to collect the enormous sum of money. Reb Aharon's response did not change.The morning of Passover arrived. The Jews of Chernobyl had an honored custom of bringing their leftover leaven  to R' Aharon who would take all of the chametz and throw it into a great fire. This year R' Aharon took the bowl which contained his own chametz and threw the entire contents quickly into the fire, saying to the chassid who had carried the bowl, "My brothers think that evil edicts are abolished with money, but that is not true. They are abolished thus."

The chassid looked puzzled. What had the rebbe meant to say, he wondered, for it was not clear at all. R' Aharon continued, "Do you remember the words of the hymn that is recited on the Shabbat before Passover? There is one verse that says, 'That is to say, by the sixth hour to burn the chametz, why are we bid? To recall Divine haste, of edicts to be rid.'

Relief and amazement were experienced by every Jew when the news spread that the nobleman who hung the edict over the heads of the Jews had suddenly died, and with him his terrible threat.

May the merit of the tzaddik Rabbi Aharon of Chernobil  protect us all, Amen.