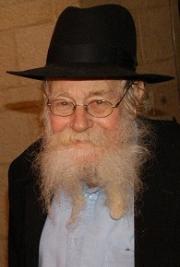 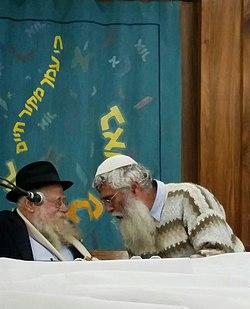 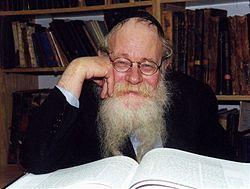 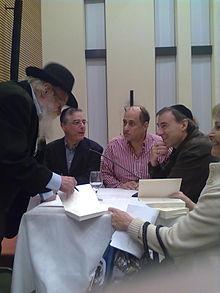 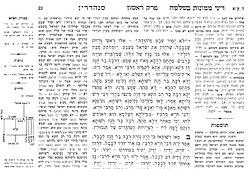 His Steinsaltz edition of the Talmud was originally published in modern Hebrew, with a running commentary to facilitate learning, and has also been translated into English, French, Russian, and Spanish. Beginning in 1989, Steinsaltz published several tractates in Hebrew and English of the Babylonian (Bavli) Talmud in an English-Hebrew edition. The first volume of a new English-Hebrew edition, the Koren Talmud Bavli, was released in May 2012, and has since been brought to completion.

Steinsaltz was a recipient of the Israel Prize for Jewish Studies (1988), the President's Medal (2012), and the Yakir Yerushalayim prize (2017).

Steinsaltz died in Jerusalem on 7 August 2020, from acute pneumonia.

Adin Even-Israel Steinsaltz and his son Meni Even-Israel inspect a newly printed volume of the Koren Noe Talmud series, an English-language edition of the Babylonian Talmud. (2018)
Adin Steinsaltz was born in Jerusalem on 11 July 1937 to Avraham Steinsaltz and Leah (née Krokovitz). His father was a great-grandson of the first Slonimer Rebbe, Avrohom Weinberg, and was a student of Hillel Zeitlin. Avraham and Leah Steinsaltz met through Zeitlin. They immigrated to Mandatory Palestine in 1924. Avraham Steinsaltz, a devoted communist and member of Lehi, went to Spain in 1936 to fight with the International Brigades in the Spanish Civil War. Adin was born the following year.

Steinsaltz became a baal teshuva during his teenage years and learned from rabbi Shmuel Elazar Heilprin (Rosh yeshiva of Yeshivas Toras Emes Chabad). He studied mathematics, physics, and chemistry at the Hebrew University, in addition to rabbinical studies at Yeshivas Tomchei Temimim in Lod and with rabbis Dov Ber Eliezrov and Shmaryahu Noach Sasonkin. Following graduation, he established several experimental schools after an unsuccessful attempt to start a neo-Hassidic community in the Negev desert, and, at the age of 24, became Israel's youngest school principal.

In 1965, he founded the Israel Institute for Talmudic Publications and began his monumental work on the Talmud, including translation into Hebrew, English, Russian, and various other languages. The Steinsaltz editions of the Talmud include translation from the original Aramaic and a comprehensive commentary. Steinsaltz completed his Hebrew edition of the entire Babylonian Talmud in November 2010, at which time Koren Publishers Jerusalem became the publisher of all of his works, including the Talmud. While not without criticism (such as by Jacob Neusner, 1998), the Steinsaltz edition is widely used throughout Israel, the United States, and the world.

Steinsaltz's classic work of Kabbalah, The Thirteen Petalled Rose, was first published in 1980, and now appears in eight languages. In all, Steinsaltz authored some 60 books and hundreds of articles on subjects including Talmud, Jewish mysticism, Jewish philosophy, sociology, historical biography, and philosophy. Many of these works have been translated into English by his close personal friend, now deceased, Yehuda Hanegbi. His memoir-biography on the Lubavitcher Rebbe, rabbi Menachem Mendel Schneerson, was published by Maggid Books (2014).

Continuing his work as a teacher and spiritual mentor, Steinsaltz established Yeshivat Mekor Chaim alongside rabbis Menachem Froman and Shagar in 1984 and Yeshivat Tekoa in 1999. He also served as president of the Shefa Middle and High Schools. He has served as scholar in residence at the Woodrow Wilson International Center for Scholars in Washington, D. C., and the Institute for Advanced Study in Princeton. His honorary degrees include doctorates from Yeshiva University, Ben Gurion University of the Negev, Bar Ilan University, Brandeis University, and Florida International University. Steinsaltz was also Rosh Yeshiva of Yeshivat Hesder Tekoa.

Being a follower of rabbi Menachem Mendel Schneerson of Chabad-Lubavitch, he went to help Jews in the Soviet Union assisting Chabad's shluchim (propagators) network. In 1995, the chief Rabbi of Russia, Adolph Shayevich gave Steinzaltz the title of Duchovny Ravin (Spiritual Rabbi), a historic Russian title which indicated that he was the spiritual mentor of Russian Jewry. In this capacity, Steinsaltz travelled to Russia and the Republics once each month from his home in Jerusalem.[19] During his time in the former Soviet Union, he founded the Jewish University, both in Moscow and Saint Petersburg. The Jewish University is the first degree-granting institution of Jewish studies in the former Soviet Union.[23] In 1991, on Schneersohn's advice, he changed his family name from Steinsaltz to Even-Israel. Besides Chabad, Steinsaltz was also inspired by the teachings of the Kotzker Rebbe. He was in close contact with the fifth Gerrer Rebbe, Yisroel Alter, and his brother and successor, Simcha Bunim Alter.

Steinsaltz took a cautious approach to interfaith dialogues. During a visit of a delegation of Roman Catholic cardinals in Manhattan in January 2004, he said that, "You do not have to raise over-expectations of a meeting, as it doesn't signify in itself a breakthrough; however, the opportunity for cardinals and rabbis to speak face to face is valuable. It's part of a process in which we can talk to each other in a friendly way", and called for "a theological dialogue that asks the tough questions, such as whether Catholicism allows for Jews to enter eternal paradise".

Steinsaltz and his wife lived in Jerusalem until his death and had three children and many grandchildren and great-grandchildren. In 2016, Rav Steinsaltz suffered a stroke, leaving him unable to speak. His son, Rabbi Menachem ("Meni") Even-Israel, is the Executive Director of the Steinsaltz Center, Rabbi Steinsaltz's umbrella organization, located in the Nachlaot neighborhood of Jerusalem.

Steinsaltz died in Jerusalem on 7 August 2020, from acute pneumonia, at the Shaare Tzedek Medical Center. He was hospitalized earlier in the week with a severe lung infection. He leaves behind his wife, and three children

Head of the new Sanhedrin

A page from Tractate Pesachim of Rabbi Steinsaltz's English translation of the Talmud
Steinsaltz was a prolific author and commentator, having written numerous books on Jewish knowledge, tradition and culture, and produced original commentaries on the entirety of Jewish canon: Tanakh (Torah, Prophets, and Writings), the Babylonian Talmud, the Mishna, the Mishneh Torah, and Tanya.

His published works include:

Steinsaltz was invited to speak at the Aspen Institute for Humanistic Studies at Yale University in 1979.

Prior to his stroke, he gave evening seminars in Jerusalem, which, according to Newsweek, usually lasted until 2:00 in the morning and attracted prominent politicians, such as the former Prime Minister Levi Eshkol and former Finance Minister Pinhas Sapir

On 21 April 1988, Steinsaltz received the Israel Prize for Jewish Studies.

On 9 February 2012, Steinsaltz was honored by Israeli President Shimon Peres with Israel's first President's Prize alongside Zubin Mehta, Uri Slonim, Henry Kissinger, Judy Feld Carr, and the Rashi Foundation. Steinsaltz was presented with this award for his contribution to the study of Talmud, making it more accessible to Jews worldwide.

On 22 May 2017, Jerusalem Mayor Nir Barkat visited Steinsaltz at his home to present him with the Yakir Yerushalayim ("Worthy Citizen of Jerusalem") medal. This medal of achievement was awarded to Steinsaltz for his writing and translating work.

On 10 June 2018, Steinsaltz was honored at a Gala Dinner at the Orient Hotel in Jerusalem for his pedagogical achievements throughout a lifetime dedicated to Jewish education. A limited-edition version of "The Steinsaltz Humash” was presented to the attendees of this event.

While certain members of the Haredi community may have opposition to Steinsaltz's works, other Jewish leaders, rabbis, and authors have spoken or written about their appreciation for Steinsaltz's unique educational approach. Rabbi John Rosove of Temple Israel of Hollywood featured "Opening The Tanya", "Learning the Tanya", and "Understanding the Tanya" on his list of the top ten recommended Jewish books. These volumes are written by rabbi Shneur Zalman of Liadi, the founder of the Chabad Lubavitch movement, and include commentary by Steinsaltz. Through reading the Tanya, readers can explore all aspects of the central text of Chabad movement. Rabbi Elie Kaunfer, a rosh yeshiva and the CEO of Mechon Hadar Yeshiva, discussed his gratitude for Steinsaltz's Global Day of Jewish Learning and the opportunity created by this online platform for learning and creating a deeper connection to Torah, other Jewish text, and Jews worldwide. Rabbi Pinchas Allouche, who studied under Steinsaltz, notes that Steinsaltz "is a world scholar" who "revolutionized the Jewish landscape" through his commentary, other writings, and educational organizations. In 1988, secular Israeli historian Zeev Katz compared Steinsaltz's importance to that of Rashi and Maimonides, two Jewish scholars of medieval times.

May the merit of the tzadik Rabbi Adin Even-Israel Steinsaltz protect us all. Amen