Rabbi Isser Zalman Meltzer (Hebrew: איסר זלמן מלצר‎) (February 6, 1870 – November 17, 1953), was a famous Belarusian Orthodox rabbi, rosh yeshiva and posek. He is also known as the "Even HaEzel"—the title of his commentary on Rambam's Mishne Torah. 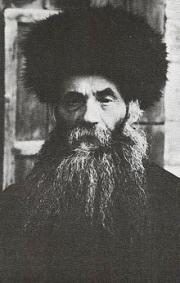 Rabbi Isser Zalman Meltzer (Hebrew: איסר זלמן מלצר‎) (February 6, 1870 – November 17, 1953), was a famous Belarusian Orthodox rabbi, rosh yeshiva and posek. He is also known as the "Even HaEzel"—the title of his commentary on Rambam's Mishne Torah.

Rabbi Meltzer was born on 5 Adar 5630 (February 6, 1870) in the city of Mir, in the Minsk Governorate of the Russian Empire (present-day Republic of Belarus) to Rabbi Baruch Peretz and Miriam Reisel Meltzer. From the age of 10, he studied with Rabbi Yom-Tov Lipman, the rabbi of the city, and at the Mir Yeshiva. In 1884, at the age of 14, he began studying at the Volozhin yeshiva under the Netziv and Rabbi Chaim Soloveitchik, where he remained for seven years.

While at the yeshiva, he became involved in the secret [Orthodox] Ness Ziona Society, part of the Hovevei Zion movement. Together with his brother-in-law, Rabbi Moshe Mordechai Epstein, he contributed to the founding of the city of Hadera by buying land for an etrog orchard.

In 1892, at age 22, he married Beila Hinda, daughter of R. Faivel Frank of Ilukste. During his engagement period, he studied at the Raduń Yeshiva with the Chofetz Chaim. During his studies, he contracted tuberculosis due to his roommate hanging animal skins in the room they were renting, and he was forced to return to his parents' home in Mir. His fiancee's family sent him money to pay for medical treatment while pressuring her to cancel the match. She refused, despite the pessimistic predictions of the doctors, and they married after he had recovered.

In 1894, Rabbi Melzer was appointed by Rav Nosson Tzvi Finkel as a maggid shiur at the Slabodka yeshiva, together with his brother-in-law, Rabbi Epstein. In 1897, Rabbi Meltzer left Slabodka to lead the Slutsk Yeshiva which had been established by the Ridvaz in Slutsk.

In 1903, Rabbi Meltzer was appointed as the Rabbi of Slutsk, a position he held for 20 years. Although he had already been serving as the rosh yeshiva in that city, he had no document of semicha because he had never planned on accepting a position in the rabbinate, but to teach Torah instead.

When the communal leaders resolved to appoint him as their rabbi, Rabbi Meltzer wrote to his teacher Rabbi Chaim Soloveitchik and to Rabbi Yechiel Michel Epstein, author of the Arukh HaShulkhan, asking them to send him the necessary affirmation. Rabbi Epstein immediately mailed him a letter of semicha, while Rabbi Soloveitchik made do with a brief telegram that simply bore the words, "Yoreh yoreh, yodin yodin".

Rabbi Meltzer was also a disciple of the Chofetz Chaim and Rabbi Nosson Tzvi Finkel. He was the father-in-law of Rabbi Aharon Kotler and maternal grandfather of Rabbi Shneur Kotler. He and Rav Aharon fled from Russia to Poland at the outbreak of the Bolshevik revolution.

Rabbi Meltzer, who subsequently emigrated to Eretz Yisrael, was a friend and admirer of Rabbi Avraham Yitzhak Hacohen Kook, the chief rabbi of Palestine and a self-avowed supporter of Zionism.[5] Rabbi Meltzer once said to the famous sage Rabbi Chaim Ozer Grodzinsky of Vilna, “We are considered Torah giants only up until the point that we reach the door of Rabbi Kook’s room.”

In his later years, Rabbi Meltzer served as the rosh yeshiva of the Etz Chaim Yeshiva in Jerusalem.

He died on Tuesday, 17 November 1953 (10th Kislev 5714) at age 83, exactly 20 years after his brother-in-law Rabbi Moshe Mordechai, and was interred on Har HaMenuchot in Jerusalem.
May the merit of the tzadik Rabbi Isser Zalman Meltzer protect us all. Amen